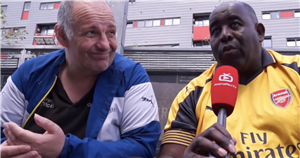 The family of former AFTV star Claude Callegari have spoken out following his tragic death.

Aged 58, the former Arsenal fan channel contributor was found at his home having passed away on Monday afternoon.

He was a favourite among Gunners fans for his passionate reactions to matches before being removed from the channel amid a controversy.

With the football community sharing thousands of tributes, Callegari’s family have now spoken out following his death.

Sharing a statement on AFTV’s Twitter page, it reads: “My family and I would like to thank everyone for their ongoing support and kind words during this extremely distressing time.

“I am now able to officially confirm that my father passed away from natural causes relating to his health.

“I hope this will ensure an end to any speculation regarding the matter and our privacy can continue to be respected whilst we make arrangements for his funeral. Thank you.”

AFTV host Robbie Lyle also shared an emotional tribute to Callegari, describing him as a man with a “heart of gold”.

“I know that he'd been having quite a tough time during this lockdown.

“Claude was Arsenal through and through, he missed being at Arsenal games, he missed the camaraderie of being at games.

“During lockdown he told me 'Rob, I've been finding lockdown difficult', I'm enjoying doing the videos but I want to go to games and be out and about.

“I'm absolutely gutted. Everybody here at AFTV, every Arsenal fan, and football fans around the world, will be gutted and devastated.

“Claude wasn't perfect, right. None of us are perfect. But Claude, one thing I can say to you about that guy is he had a heart of gold.”

'Help! How do I watch?': Rob McElhenny begs for Wrexham stream