The Colorado Rapids lived up to their wheeling and dealing reputation once again in the MLS Super Draft Tuesday.

It was the fourth consecutive season in which the Rapids made a trade on draft day.

The Rapids then chose Notre Dame central midfielder Mohamed Omar with their initial choice at No. 23, and followed that up with the selection of Northern Illinois defender Anthony Markanich with the No. 26 pick.

“In this draft, we felt we were able to get a few players in our top ten even by drafting further down,” Rapids general manager Pádraig Smith said. “We saw value and were able to bring in money without losing out on a pick.”

Omar, a 6-foot-3, 182-pound midfielder from Toronto, became the second straight Rapids first-round pick to come out of the Atlantic Coast Conference, following last year’s selection of Philip Mayaka out of Clemson at No. 3 overall.

Omar helped Notre Dame reach the NCAA College Cup this past season and played in 23 games for the Fighting Irish, scoring four times with one assist. Omar started 55 games in his Notre Dame career, with 69 appearances.

“In Omar, we saw a really talented, technically highly proficient player,” Smith said. “He’s a big kid from a height stand point and needs to put on a bit of weight to become stronger. He’s got a little bit of bite to him as well. When you add physical qualities and that kind of bite to an already technically proficient player, that’s really enticing. We think we can help him improve and ultimately become a player who can make an impact in MLS.”

MLS SuperDraft pundit Devon Kerr called him a “destroyer” who plays well in the central midfield.

“He knows how to stretch the game,” Kerr said. “He can win balls in the air … His frame, he looks long, he looks lanky a little bit, but he runs right through you.”

He also drew comparisons to fellow Canadian midfielder Mark-Anthony Kaye, who the Rapids acquired for $1 million in General Allocation Money last year from LAFC plus the No. 10 overall pick.

“Anytime you get compared to national team guys, guys who have proven themselves in MLS, it’s an honor,” Omar told MLSSoccer.com reporter Susannah Collins during the broadcast. “I’m really looking forward to the opportunity to being in Colorado with (Kaye), being teammates with him and really just learn from him.”

Markanich was a four-time All-MAC honoree and started in 67 games for the Huskies with 17 goals and 24 assists. Markanich is a twin and his brother, Nicholas, who was a second-round pick by FC Cincinnati, formed a great duo for an NIU team that reached the second round of the NCAA Tournament.

Markanich, 6-foot-1, 165 pounds, provides additional depth to the back line. With the Rapids re-signing Steven Beitashour and Drew Moor to one-year deals, he will have a chance to learn seasoned veterans.

“We saw a good two-way player in Markanich,” Smith said. “Obviously, left backs are highly sought after commodity and we think he’s got a good attitude and knows what he’s doing on both sides of the ball. It’s an attractive combination. … To be able to learn from guys who have done it at the highest level, they will all have a great influence.”

Colorado made only one of its two second-round picks, taking El Salvadoran international Roberto Molina, a 20-year-old right winger, at No. 45 overall. Molina, who is listed at 5-foot-9, played 30 times last season and scored twice for the Las Vegas Lights of the USL Championship. Molina has made three appearances for El Salvador’s national team. The Rapids passed on their lone third-round selection.

“We thought we were going to pass (on the second round), but then, when we saw Molina was available we were thrilled,” Smith said. “He’s got three international caps and has already played at the USL level. He’s a really interesting, tricky player that we think has potential at the next level.”

With the No. 10 pick, Nashville SC selected a defender Ahmed Longmire of UCLA. In order for the Rapids to receive the conditional GAM of $50,000, Longmire will have to hit pre-specified performance marks in 2022.

The lone Coloradan in the SuperDraft, Ryan Sailor, was projected to be a high pick and Inter Miami CF selected him at No. 9. Sailor played his college soccer at Washington and was a first-team All-American and the Pac-12 defender of the year. The Centennial native and Arapahoe High alum played his club soccer at Real Colorado. 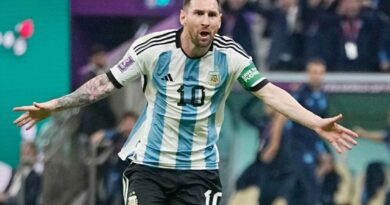