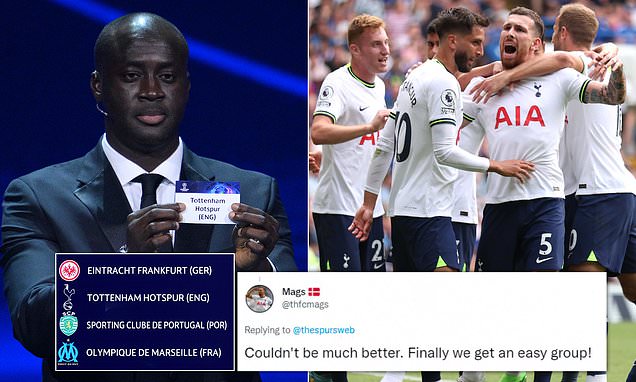 ‘Who do we get in the next round?’: Tottenham fans confidently already looking to the knockout stage after being given a favourable group of Frankfurt, Sporting Lisbon and Marseille in the Champions League

Tottenham fans are already confidently looking towards the Champions League round of 16 after they were handed a dream group on their return to the competition.

Spurs, who reached the final in 2019 and are back in the tournament for the first time since 2020 after a late-season rally under Antonio Conte last term, were drawn in Group D against Europa League winners Eintracht Frankfurt, Sporting Lisbon and Marseille.

The draw saw the north London side dodge European champions Real Madrid while they also avoided big hitters such as Bayern Munich and PSG. 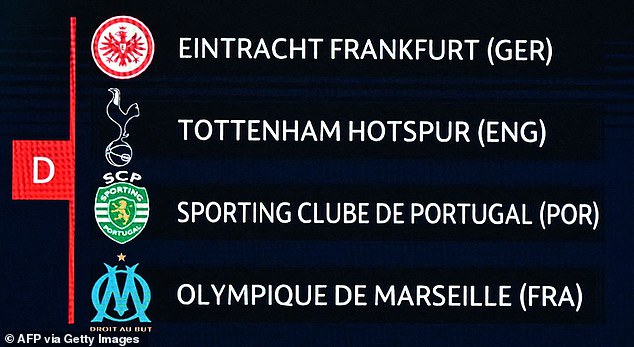 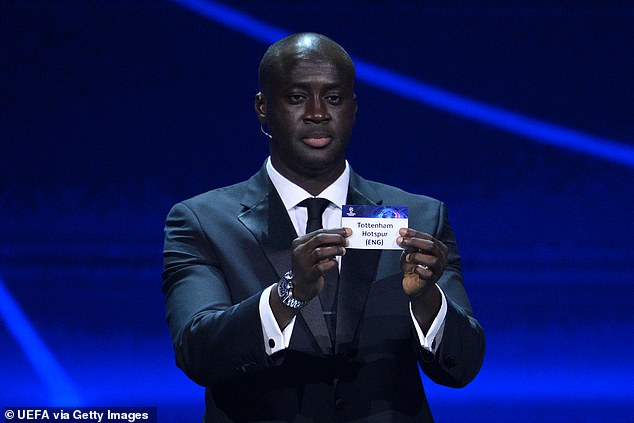 Yaya Toure, a youth coach at Spurs, did his current club a huge favour with the group draw

And while nothing is guaranteed, confident Spurs fans took to Twitter following the conclusion of the draw to ask who they will be facing in the knockout stages.

One fan tweeted: ‘Who do we get next round?’ while another insisted that they wouldn’t expect ‘anything less than 15 points’ from their six group games.

Other fans compared to the draw to the one ‘you’d get in the Europa League’, given the lack of Champions League pedigree in Group D.

One confident, but cautious, Spurs supporter insisted that the club ‘should be winning that group’ before saying that fans ‘never know’ when it comes to their side.

Another added that it is one of the first times Spurs have been given an ‘easy group’ in the competition, claiming it ‘couldn’t be much better’.

While another fan said: ‘No Champions League draw is “easy”, but there’s no excuses of not qualifying out of that group.’

One supporter jokingly claimed it was ‘Group D for Group of Dreams’ before getting excited about the outcome.

‘What a drawing for us,’ they tweeted. ‘No reason we shouldn’t go through the group onto RO16!’

Elsewhere in the competition, Liverpool will face Rangers in a battle of Britain after the pair were drawn together in the group stage.

The Reds, who were beaten finalists last season, have never played the Scottish giants in a competitive fixture, but they will meet twice in Group A.

Rangers booked their place in the group stage for the first time since 2010-11 by beating PSV in the final qualification round.

They will return to Holland as Dutch champions Ajax were also drawn in Group A, along with Serie A side Napoli.

Erling Haaland will get a speedy reunion with former club Borussia Dortmund after Manchester City were drawn against the German club in Group G. 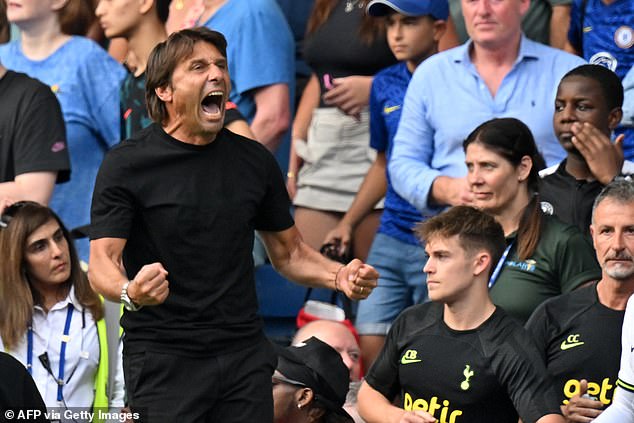 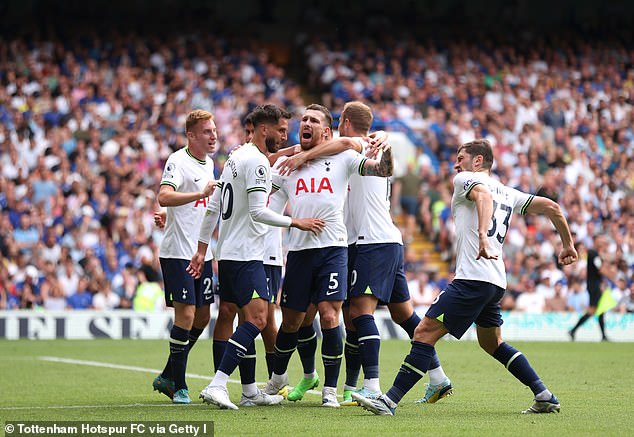 The Norway striker swapped the Bundesliga for the Premier League this summer but will get the chance for a Signal Iduna Park farewell.

City, beaten in last season’s semi-finals, were also drawn against Sevilla and FC Copenhagen as they try and win the competition for the first time.

The Scottish champions will also play RB Leipzig and Shakhtar Donetsk as they return to the group stage for the first time since 2017.

AC Milan defender Fiyako Tomori will come up against his former club Chelsea after the pair were drawn in Group E.

Thomas Tuchel’s side will also face Salzburg and Dinamo Zagreb and will be favourites to progress to the knockout stage. 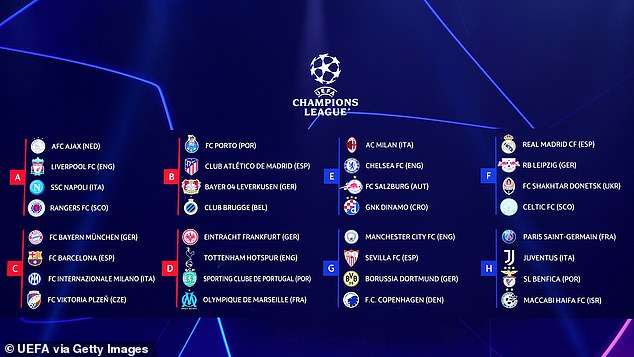 Spurs were put in Group D along with Eintracht Frankfurt, Sporting Lisbon and Marseille

All six British teams will have been delighted to avoid Group C.

Robert Lewandowski will also return to his former club as Barcelona were drawn with six-time champions Bayern Munich, who he left in the summer.

Inter Milan also join them in a group stacked with some of European football’s biggest names, with Viktoria Plzen the firm outsiders.

Porto, Atletico Madrid, Bayer Leverkusen and Club Brugge were drawn in Group B.