Home » Soccer » Coronavirus: Will the English Premier League be able to finish the season?

LONDON• • British football is facing a crisis that is unprecedented in the modern era, after the postponement of the league seasons in England plunged clubs into a spell of financial and legal uncertainties.

While there is relief across the game that football has taken the decision to suspend play until April 4 amid the coronavirus pandemic, there is concern that the season may never be completed.

With a three-week period at least before another ball is kicked, many issues are set to come to the fore that could provide clubs with significant challenges.

One senior figure in broadcasting told the Times of London: “The commercial reality for the Premier League and Uefa is that if they don’t complete their seasons, then they are in breach of their broadcasting contracts.

“You would have broadcasters from all around the world saying, ‘In that case we are not paying for the season’. For the Premier League you are talking around £3 billion (S$5.24 billion) income a year from overseas and domestic TV rights.”

Football finance expert Kieran Maguire told the BBC that, with the uncertainty surrounding the way the Premier League will finish, if at all, some have suggested clubs could have grounds to sue if they are relegated in the unusual circumstances.

“Certainly clubs will be taking legal advice,” he said. “The difference between a Premier League broadcasting deal, which is worth a minimum of £100m a season, to the £7m you get in the Championship is so significant that I think clubs would be foolish not to explore all options, including making a litigious appeal.”

Contractual obligations with sponsors could also affect clubs up and down the football pyramid.

“At the moment every club will be looking at key contracts with sponsors and advertisers, trying to identify where the risk hotspots are,” said Andrew McGregor, a senior associate at sports law firm Brabners.

“The commercial concerns will be around a reduction in value of contracts caused by suspension or playing behind closed doors. Take perimeter advertising, which in the Premier League can sell for anything from £30,000 to £60,000 a minute. Partners will have minutes included in their deals with the club; so what happens if there are no fans in the stadium?”

Contractual obligations to partners and sponsors are just one part of the picture. Centrally there is the issue of wages, not only for players but support and ground staff.

At the end of the day, it’s about financing professional football. If payments due from broadcasters don’t come in, a lot of small and mid-size clubs will have liquidity problems.

There is also the possibility of legal claims being brought by third party contractors such as caterers or in-house betting providers, if games do not go ahead.

Another factor that could complicate any hopes of completing the season is the timing of players’ contracts. Commonly contracts run until June 30, which would mean that, if delayed matches were to be played later than that date, players who had previously been under contract, may no longer be and could in fact have agreed deals to sign at new clubs.

Uefa is calling for a meeting this Tuesday, when it is expected to postpone Euro 2020 till next year, which will vacate the summer for domestic league matches to resume. But even if the tournament is called off, it is unsure whether there is sufficient time to complete league matches, particularly as resumption is unlikely in three weeks.

Football Association chairman Greg Clarke has reportedly told the Premier League he does not believe the season will be completed because of the pandemic.

The issues would probably apply as well to the rest of Europe’s top leagues, which are mostly also suspended till April 4 and are likely to feel a greater impact if they are unable to complete their seasons.

In England, Premier League clubs who have profited from huge TV deals should be able to handle a few weeks without matches, but the effects will immediately be felt elsewhere.

“At the end of the day, it’s about financing professional football,” Bayern Munich chairman Karl-Heinz Rummenigge warned when asked if it might be better to stop playing football in Germany for the rest of the season. “If payments due from broadcasters don’t come in, a lot of small-and mid-size clubs will have liquidity problems.”

According to a study by Spanish radio station Cope, La Liga clubs would lose a combined total of over €600 million (S$943 million) in income from television and ticketing if no more matches were played this season.

Liverpool manager Jurgen Klopp said on Friday football was no longer a priority amid the pandemic and society must do all it can to put health first.

But perhaps, the financial and legal repercussions could be too great for European football to bear. 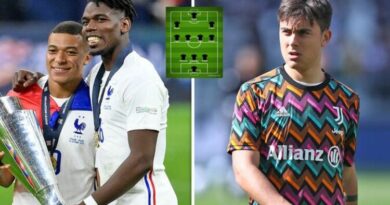 Mbappe, Pogba and Dybala included – the free agent XI that would destroy most teams