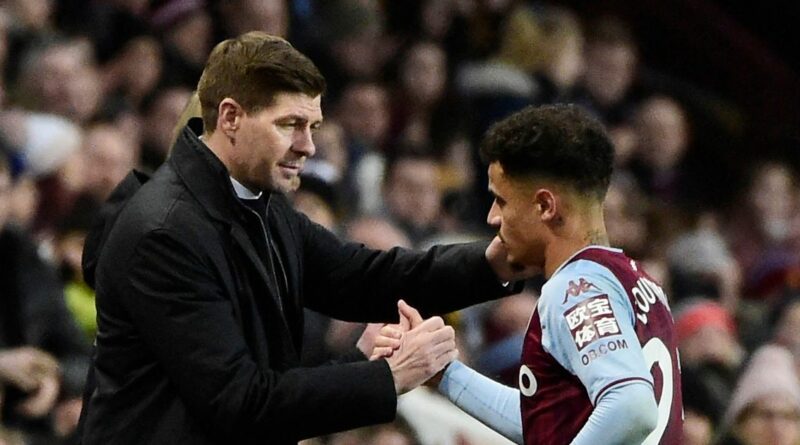 Aston Villa have reached a 'total agreement' with Barcelona for a sensational summer swoop for Phillipe Coutinho.

That is according to transfer specialist Fabrizio Romano, who claims former Liverpool team-mate Steven Gerrard was the 'key' to convincing the Brazil international to sign. The former Bayern Munich and Inter Milan playmaker is currently on loan with Gerrard's side, but is now set to agree a permanent return to the Premier League.

Coutinho made a blistering start to life at Villa Park, and has already registered four goals and three assists in 16 top-flight appearances. Initial reports claimed Villa had negotiated a £33million transfer fee in January for any potential summer deal, but the latest claims suggest an agreement has been reached for a far lower fee.

Coutinho completed a blockbuster £146m move to the Nou Camp in January 2018, but has struggled to meet expectations with the Catalan giants. The 29-year-old has been reduced to a bit-part player in recent seasons, and recent reports have outlined Barcelona's desperation to clear his sizeable wages off their books.

Arsenal and Newcastle United are among those linked with potentially hijacking any summer deal for Coutinho. However, Romano confirmed on Wednesday night that a breakthrough had been reached in negotiations.

He posted: "Total agreement reached between Barcelona & Aston Villa for Philippe Coutinho. The deal is now completed and set to be announced: Coutinho will become Aston Villa player on a permanent deal. Steven Gerrard was key for Philippe to continue with Aston Villa."

Coutinho returned to Villa's starting eleven and completed 70 minutes against former side Liverpool on Tuesday night, with a second-half Sadio Mane header sealing a 2-1 victory for the title chasers. The attacker was rested in the weekend win at Burnley for the first time since January, and Gerrard outlined his hope of completing a permanent move for his former team-mate.

The Villa boss told reporters: "We want Philippe Coutinho here for sure. We have five games in 15 days so Phil and Emi [Buendia] will both get enough game time to keep themselves satisfied. As a club, we want to be in a place where games come thick and fast. Phil understood the decision, he has played a lot. There are no egos here."

Football’s law-makers look to crack down on time wasting

Chelsea player ratings vs Krasnodar: Arrizabalaga gets a 5 after draw as Gilmour stars