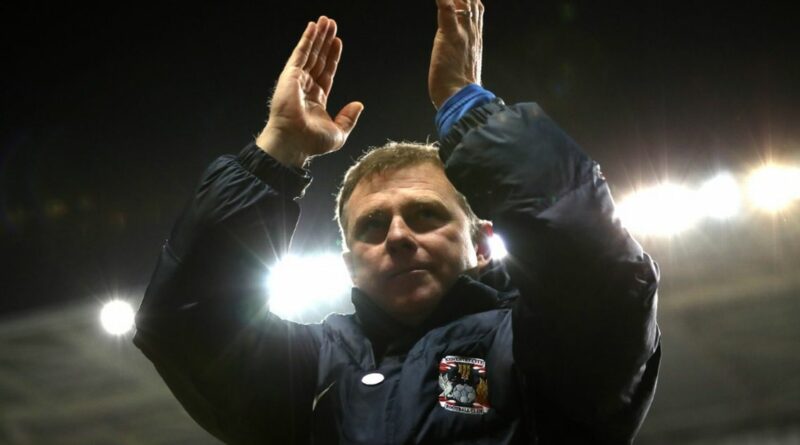 Like an unwanted bathroom spider circling the plughole, the Sky Blues battled a tide of mediocrity on the pitch and destabilising stadium battle off it.

It should have been different. Plenty of clubs have suffered Premier League relegation – as the club did in 2001 – and steadied themselves, particularly set against the backdrop of the Ricoh Arena coming online.

Even when owners SISU threw money at the problem, they managed to do so in the wrong direction. A caustic courtroom row with the council accelerated their issues. The downwards vortex proved impossible to arrest until the club found itself languishing in League Two four years ago.

And what of today?

Something is stirring in Midlands' football. And – this isn't a sentence I've written much in the past 25 years – it's Coventry City.

It's taken pain – horrific sporting pain – in a city that remains the ninth-largest in England to strip a sorry show back to its' barest bones.

But, almost four years since Mark Robins returned to manage the club, it's entering a new phase of growth. The re-birth is over.

Whisper it quietly, but the club is on the move again. And this time upwards.

Away from the field of play, the owners have decided upon a direction of travel. Identifying a site to home a new stadium and a short-term agreement with Birmingham City to ground-share is not a solution – but it's certainly better than travelling to Northampton Town on a regular basis.

All that would be far more of a source of frustration if the team wasn't performing on the pitch. As it is, as long as results improve, that distracting show remains on the sidelines. But not forgotten, all the same.

However, since Robins returned, the upwards momentum has been every bit as irresistible as the downwards force that shunted the club into League Two.

The 51-year-old may have a straightforward, no-frills delivery in public. But he, along with assistant Ade Viveash and Under-23 coach Jason Farndon, have instilled a style that is producing results.

It's a tricky balancing act.

It was the philosopher Plato who once wrote that 'necessity is the mother of all invention' and where else could the Sky Blues go, other than to place heavy emphasis on youth during their darkest days?

By offering a pathway to the first-team, talented teenage prospects such as Tom Bayliss and Sam McCullum have profited. Their exits to Preston and Norwich boosted the cash-flow by over £5m.

Highly-rated academy director Richard Stevens deserves praise for at least handing Robins the raw materials with which to work. He has subsequently been head-hunted by West Brom to replace Mark Harrison who made the switch to Aston Villa.

Head of recruitment Chris Badlan is name-checked regularly by Robins. The arrival of Matty James, on loan from Leicester via Barnsley, should make good the absence left by skipper Liam Kelly.

Young players continue to be given a platform. Leo Ostigard (loan from Brighton ) Ryan Giles (on loan from Wolves ) and Callum O'Hare (signed from Aston Villa) are all benefiting from playing games where otherwise their development has been stunted at their parent club. Coventry have been quick to spot a gap in the market.

It's proving a potent combination. Despite boasting the second-lowest wage bill in the Championship – only Wycombe Wanderers spend less on wages – a quiet start has gathered pace.

Four defeats since the start of November suggest this is an upwardly-mobile side that will improve as they continue to grow their experience in the Second Tier.

Why do they continue to make good?

The contribution of the coaches at this point should not be under-estimated. Viveash worked with Chelsea's academy for years. He wants football played through the lines – Under-23 coach Jason Farndon is understood to sing very much from the same hymn sheet.

And while Robins is in many respects an 'old school' boss who could – before the pandemic – be seen out and about scouting players he had an interest in – he has embraced, promoted, adopted and been flexible enough to marry his own approach with those working for him.

And it is being rewarded.

It has to be said that Robins does benefit in two other ways – and one of them potentially could see him tied to the Sky Blues for far longer than might otherwise be the case.

There is no meddling from above. There is a bond of trust between the manager and ownership. Robins does have a dialogue with owner Joy Seppala and is given space to manage as he sees fit.

And the manager does have one other major factor in his favour: The expectation levels of a set of supporters who have been kicked emotionally from pillar-to-post are so low as to be non-existent.

Finally, there is no director of football as their was under Ray Ranson and there is no constant churn of players that have been expensively brought in and discarded every 12 months or so as the manager inevitably changed.

It's not all perfect, by any means. Coventry City will not be a force in English football again until they are housed in a stadium in their own city, retaining their revenues and entertaining more of their supporters than currently make the 40-mile round trip to Birmingham.

But it's way better than it was.

An experienced, hard-working, successful manager with a support team developing and playing attractive football with a core of young players brought in by a recruitment team that keeps finding unpolished gems. What is there not to like?

Yes, something is stirring at Coventry City. Finally, for a long-suffering support-base those skies really are turning bluer.

'We were calling him Zidane!': Mourinho jokes about Hojbjerg's skill