Cowdenbeath were left fuming after their showcase cup tie with Rangers was called off despite their assurances the surface would have been playable by kick-off.

Sportsmail understands concerns were first raised by the advance travelling party from Rangers, including the kit manager and a member of the security team, when they arrived to set up several hours ahead of the players and management.

A number of hard patches on the Central Park pitch, caused by covers blowing off overnight, were causing alarm. And one corner, in particular, prompted a request for an inspection. 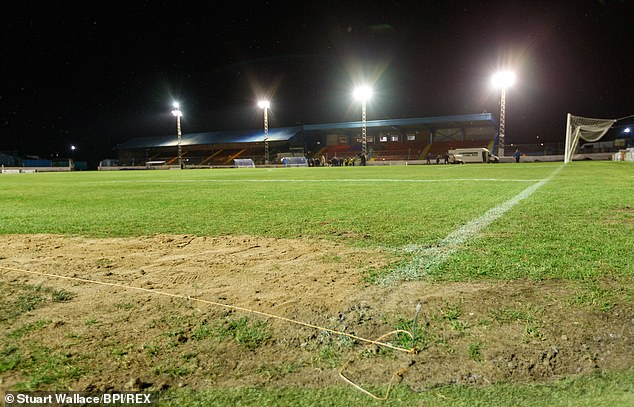 There were a number of hard patches on the Central Park pitch, caused by covers blowing off

Local referee Scott Millar was called in and made the decision to postpone the match which has now been rearranged for Wednesday, January 30.

But Cowdenbeath boss Gary Bollan was adamant the game could have gone ahead and said: ‘I’m a bit frustrated. A couple of small areas of the pitch were touch and go but by quarter to eight, we could have had it ready. I think it would have been playable.

‘To make a decision at this time was maybe a bit too soon. He (the ref) felt there were two areas of the pitch that were hard. He made his decision. We feel it was a bit premature.

‘If it was Berwick Rangers the game would have gone ahead tonight.’

Former Rangers player Bollan added: ‘We didn’t think Rangers would be rusty but they have had two weeks off and I know from being a player myself that practice games aren’t the same as competitive games, so that chance to catch them at 100 per cent is gone now.

‘For this big an occasion and all the work that has gone on, it’s massively disappointing.’

The League Two club’s chairman Donald Findlay added: ‘There were a couple areas of the park that were firm but it took a key so it would take a stud. The temperature was rising, the pitch was only going to improve and within an hour the pitch was absolutely playable so there was no reason to call that game off.

Club director Tom Ewing also insisted the surface was playable, and revealed: ‘We didn’t call the referee in. We felt the pitch was fine. We were confident that the pitch was good.

‘Some of the Rangers staff arrived and the next thing there were discussions with the SFA and they wanted to send the referee along.

‘It’s their game and we’ve got to abide by that. It was a local referee that was called out and in our view it was only a precaution. 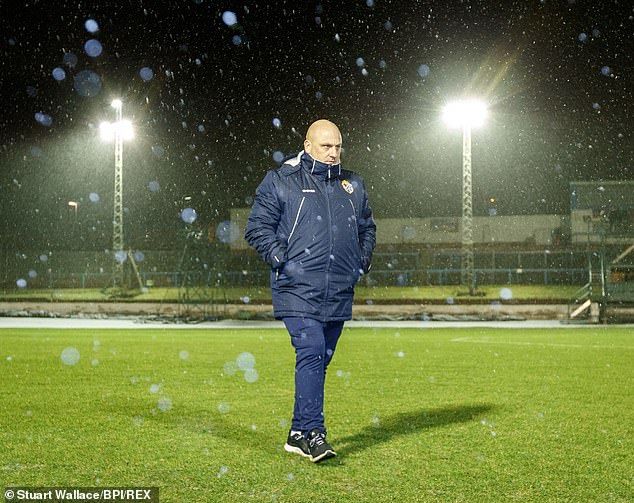 ‘We played in the Betfred Cup a couple of games here after a long, dry summer and I would absolutely say the pitch was harder then that it is now.

‘The referee’s made his decision and we’ve got to abide by that, but we are hugely disappointed.’

Premier Sports still intend to televise the rearranged tie, meaning Cowdenbeath won’t lose out financially, while Rangers have already said that tickets for last night’s match will be valid for the rearranged fixture.

The Ibrox club’s first game after the winter break was scheduled to be a 4,300 sell-out, with a bumper TV audience also expected to be drawn by the prospect of seeing marquee loan signings Jermain Defoe and Steven Davis perform in a ground usually only packed out for stock car racing.

Cowdenbeath club secretary David Allan said volunteers had worked hard to get the game on, and explained: ‘We put the covers on the pitch on Wednesday but the problem was there was a big gale which lifted a couple of the sheets off and exposed two or three areas to the cold. 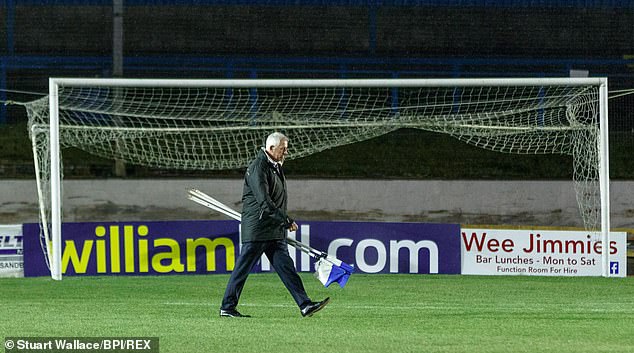 ‘We put the covers back on but the areas exposed are the side of the pitch which does not get much sun. We did various things today to ensure the pitch was playable but there are two areas which are just too hard.

‘The referee will not be a popular man I guess but I don’t blame him. He had a difficult job and I made sure no-one from either side went out to influence him.’

A statement on the Rangers website read: ‘Rangers can confirm that tonight’s William Hill Scottish Cup tie against Cowdenbeath has been postponed.

‘Following a referee inspection this afternoon at 16:45, it was deemed that the pitch was unplayable. The date for the rearranged fixture is Wednesday 30th January.’

The Ibrox club declined to comment further when contacted by Sportsmail.