Home » Soccer » CRAIG HOPE: Jack Grealish can only dream of 'playing like Almiron' 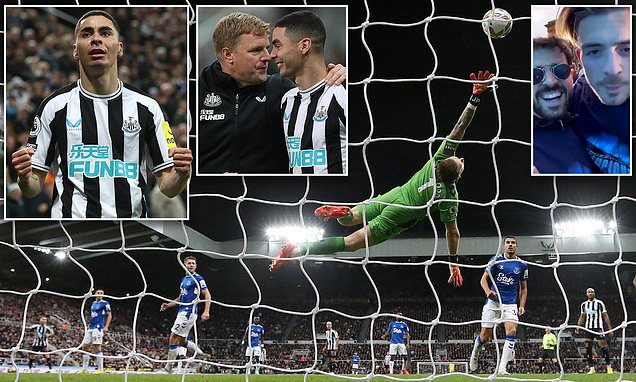 CRAIG HOPE: Jack Grealish can only dream of ‘playing like Almiron’ on current form… Newcastle’s Paraguayan has gone from laughing stock to goal machine under Eddie Howe and is one of the Premier League’s BEST players right now

When Newcastle signed Miguel Almiron from Major League Soccer nearly four years ago, there was a YouTube video compiled by his friend that served to justify the £21million record outlay and excite fans.

Until this season, that showreel remained the best example of his potential. Now, there is no need to scour the video archives as his talent is broadcast weekly.

Take Sunday’s Match of the Day 2, when Goal of the Month featured two of Almiron’s strikes — bafflingly, not a third — and the highlights which followed included another of his goals during Newcastle’s 4-1 win at Southampton. 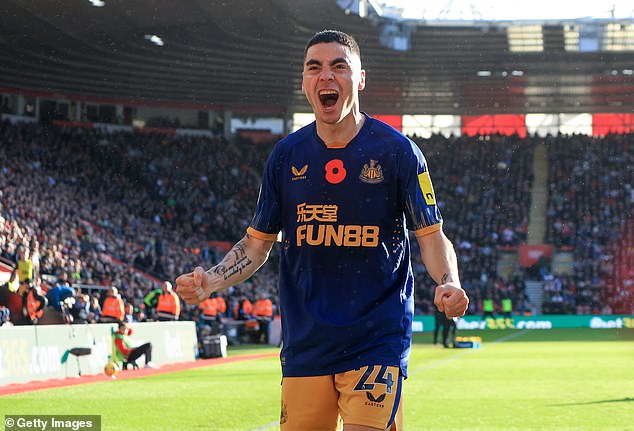 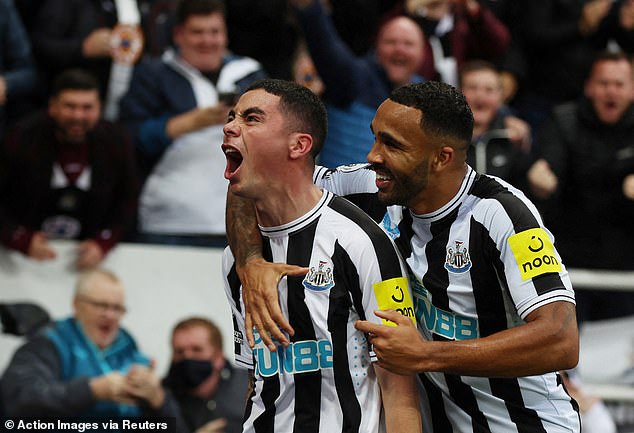 That makes it seven in seven for the Paraguayan and eight for the season. His angle-defying volley against Fulham ultimately won the prize.

Joelinton has been the poster boy for the transformation of the club’s players under Eddie Howe. Not any more.

Never mind posters, it is billboards for Almiron, given the headlines he has monopolised in recent weeks. 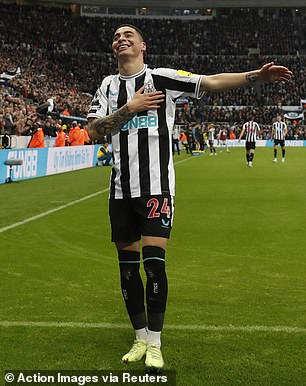 Goals have a habit of making folk take notice and his return this campaign is just one shy of his Premier League tally in the previous four. Those numbers alone illustrate the extent of his remarkable turnaround.

Sportsmail was there when, in February 2019, he made his Newcastle debut in the Spanish town of Murcia during a friendly against CSKA Moscow. Fans reacted with distaste at our hot-take beneath the sun — ‘struggles to shine’ and ‘busy, if not particularly bright in possession’. But our observations were somewhat prophetic.

In the years that followed, Almiron ran around, but seldom ran a game. When an intoxicated Jack Grealish mocked his Manchester City team-mate Riyad Mahrez for ‘playing like Almiron’ at the end of last season, it was crass but you knew what he meant. The Newcastle forward had become a by-word for aimless endeavour.

What Grealish must now realise, from the sober darkness of City’s bench, is that he can only dream of ‘playing like Almiron’ on current form.

Since his £100m move to City, the midfielder has scored seven times in 53 matches. Almiron has the same total since the start of last month.

Howe insists his player is not motivated by the slur, but something has stirred the 28-year-old. In doing so, he has become the solution to a problem of which he was, in large part, the cause. 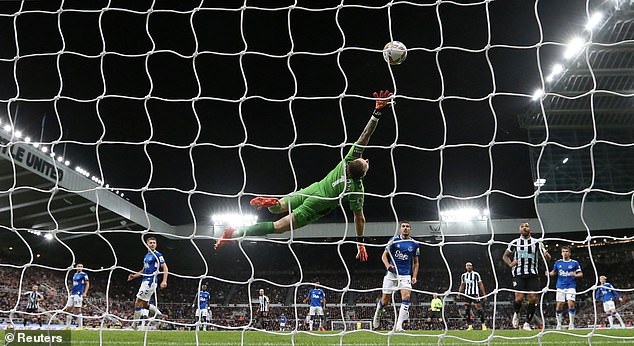 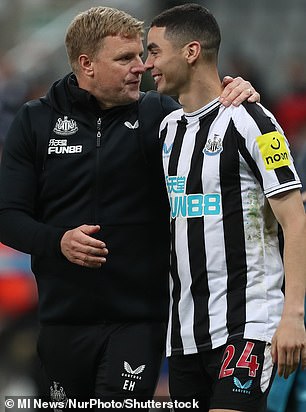 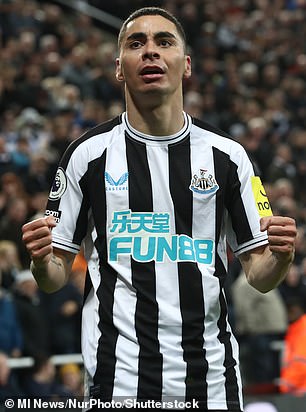 Newcastle spent this summer looking for a winger with better end product. If you had asked supporters a year ago, Almiron would have been happily sacrificed, even if they appreciate his honesty and work ethic.

But as pre-season wore on, and Almiron kept scoring, Newcastle cooled their interest in several targets. Howe was happy to start with Almiron on the right, despite some observer scepticism. 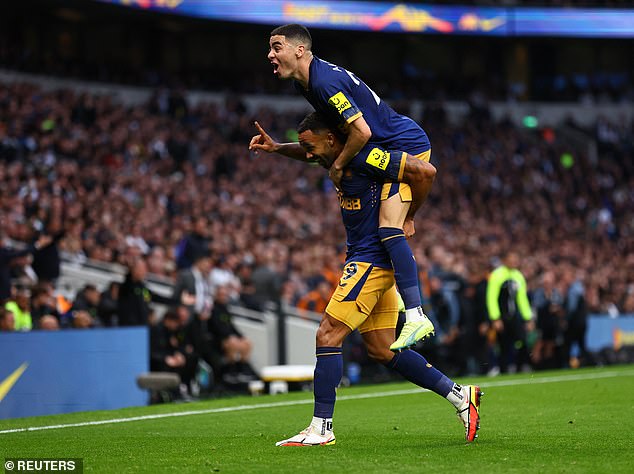 Under Howe’s guidance, Almiron has become one of the league’s most potent attackers

He was convinced Almiron had not been used in the correct areas — he spent a period as a central midfielder under Steve Bruce — and so set about re-programming the South American.

Now, he gets the ball in the final third rather than on halfway. His instruction, and he evidently needs direction, is to go for goal.

He is doing that to devastating effect. This, allied with a willingness to press forward and run back, makes him undroppable. 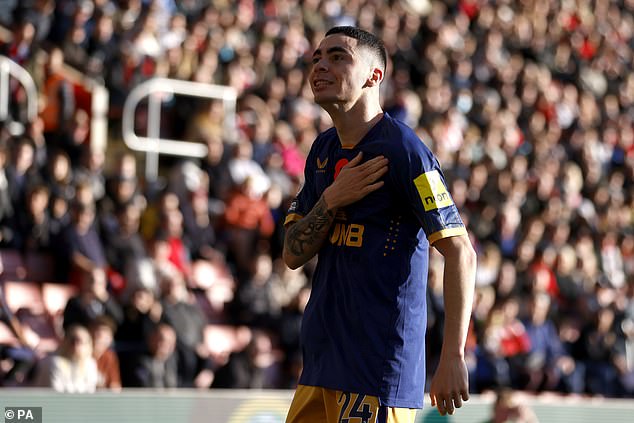 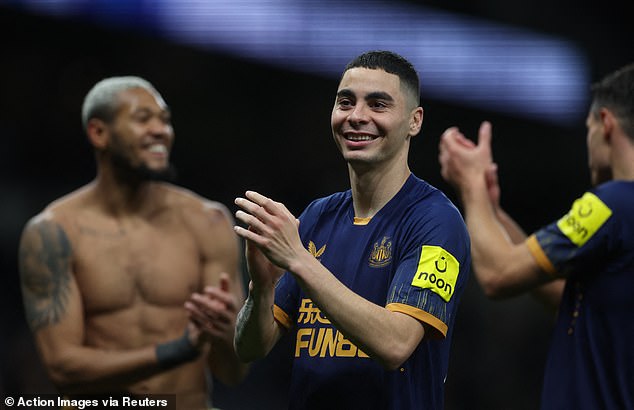 On the day he joined, we asked Almiron about his YouTube reel. ‘You will only see if that was true when I play,’ he said.

It was starting to feel like an illusion. But this is not — Newcastle are third in the Premier League and, right now, Miguel Almiron is one of the division’s best players.