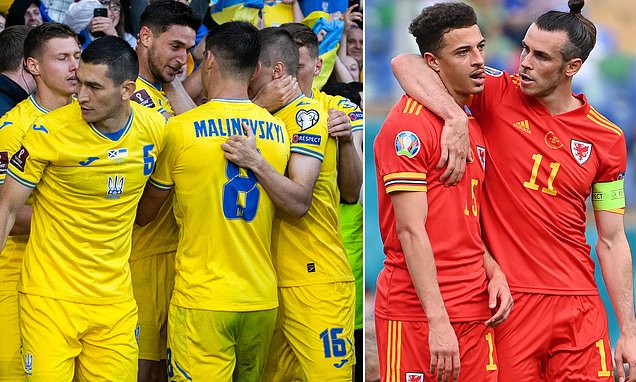 CRAIG HOPE: Wales be warned, you have taken the baton as the planet’s most unpopular team… Ukraine are united in message and know they are only at half time after beating Scotland as they chase a ticket to Qatar

There was no sense of triumphalism. While the rest of us lauded the full-time result and performance that brought Ukraine’s 3-1 win over Scotland, for their players, this was half-time.

That should serve as a warning to Wales ahead of Sunday’s World Cup play-off in Cardiff, where the prize is a ticket to Qatar.

Gareth Bale and Co will now take up the baton of the planet’s most unpopular team. It proved too heavy for the Scots on Wednesday night in Glasgow. 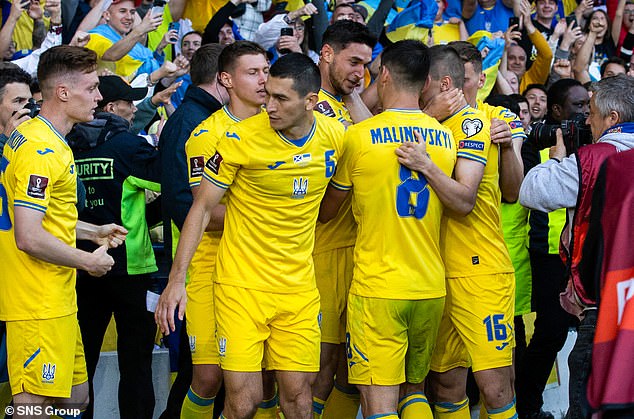 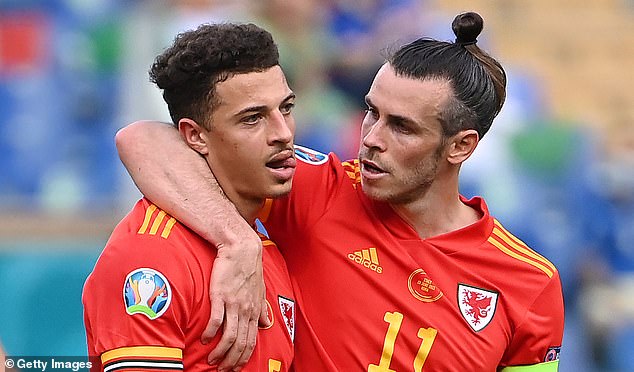 Ukraine, went the pre-match rhetoric, would be pushed to their physical and emotional limits. They were – and then went beyond them.

Logic tells you that could leave them drained, and likely defeated, against Wales. But that was not the impression you were left with in the hours after the game inside Hampden Park.

When their players emerged from a dressing-room that played no victorious music and had witnessed no group selfies, they were united in message. In fact, they had been united in everything they did all evening.

‘We have a dream as a team to be at the World Cup and we have one more game — one more final — and we need to win it,’ said Oleksandr Zinchenko. ‘Otherwise, this game is not going to mean anything.’ 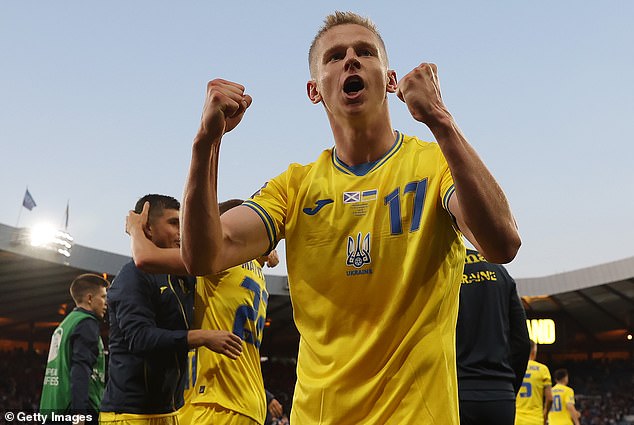 Atalanta playmaker Ruslan Malinovskyi was asked to describe what we presumed, wrongly, were joyous dressing-room scenes.

‘This win is important but if we don’t win the next game, it’s for nothing,’ he said. ‘We need to be calm and focus on the next game.’

One of the reasons Ukraine’s players had no time to indulge in celebration was the volume of messages waiting for them.

‘I have had maybe 100 messages from my friends and from my family and the army who serve,’ said Taras Stepanenko, the Shakhtar Donetsk midfielder who was playing his first competitive game since December, not that it showed.

‘I can’t explain, this game for our nation is unbelievable. It is really great emotions for our nation. It’s went from our heart and our soul. Sometimes, I can’t say what I feel. When I heard the anthem of Ukraine, I wanted to cry.’ 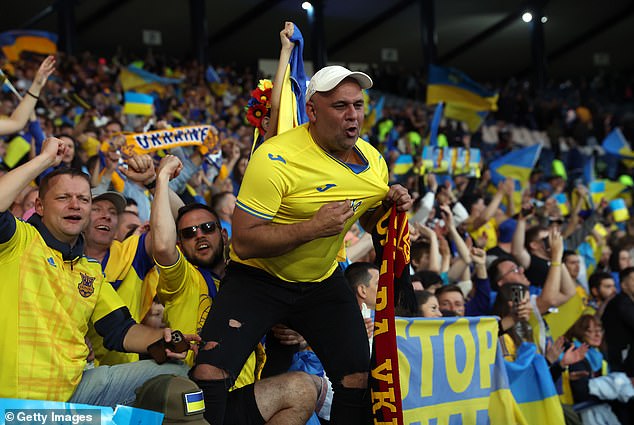 Ukraine fans took over Glasgow on Wednesday with 3,000 supporters in full voice

But there was humour, too, reflective of the defiance that has characterised the resistance of the Ukrainian people. Stepanenko had received messages from his friends on the frontline, querying the award of Scotland’s goal, which only just crossed the line. That they had swapped Kalashnikovs for a TV remote is remarkable in itself. The power of football, you might say.

‘The guy who serves on the border… my very good friend is in a difficult point, he is fighting every day,’ said Stepanenko. ‘They know all about crossing lines and borders, and he said the army at the border said the ball didn’t cross the line!’

It is incredible to think that a little over three months ago, Stepanenko, his wife and three young sons took refuge in a basement as bombs landed around them. He later signed up for the army once his family had been moved to safety. From battlefield to playing field, his courage knows no bounds.

His midfield sidekick Malinovskyi said: ‘We have a lot of contact with a lot of people on the front. It’s normal people, our friends, they texted before the game saying, “Guys, we are with you, do your job on the pitch and we’ll do our job to protect our country”.’ 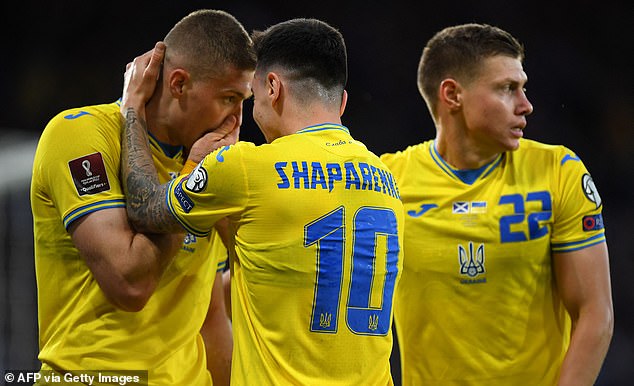 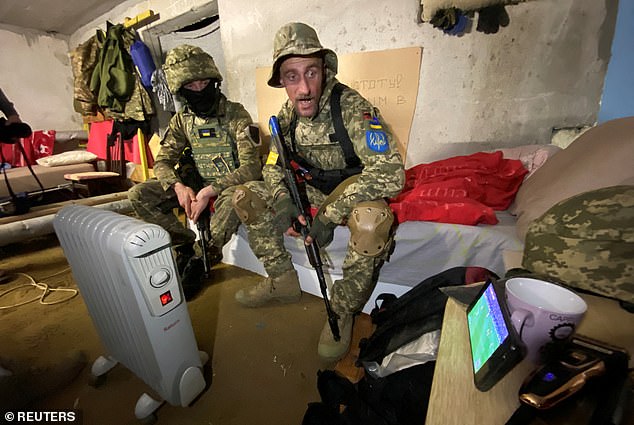 Their incredible display inspired troops on the front line, with many soliders contacting the teamn to give them words of encouragement

It brought a smile when he added: ‘I would say we had great performances in training. We always push and, sometimes, it looks like an official game because everyone goes in with tackles. Because of this, we also had some injuries in training…’

But for all the talk of fight and spirit, it is perhaps lost how gifted this Ukraine squad really are. Andriy Yarmolenko’s opening goal against the Scots was beautiful. While Lionel Messi was winning plaudits 400 smiles south at Wembley, the evening’s most audacious show of skill belonged to the West Ham forward, who killed a dropping ball as if wearing sticky tape before lobbing, seemingly effortlessly, over Craig Gordon.

Zinchenko, though, was the outstanding player. The Manchester City star cried on Tuesday night when revealing the will of his team to make it to the World Cup. But for every teardrop, there were gallons more in blood and sweat. Perhaps only President Zelensky is a more popular public figure in Ukraine right now. 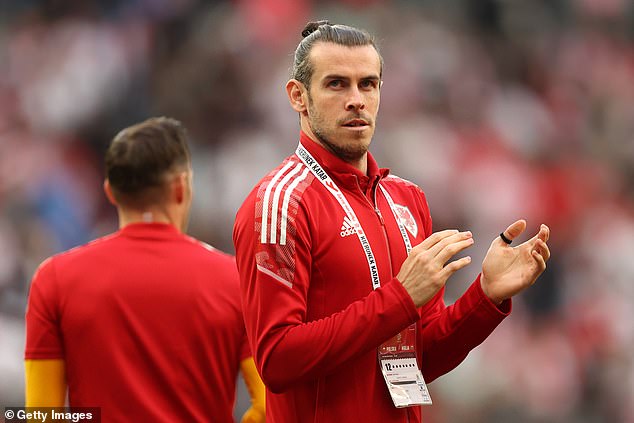 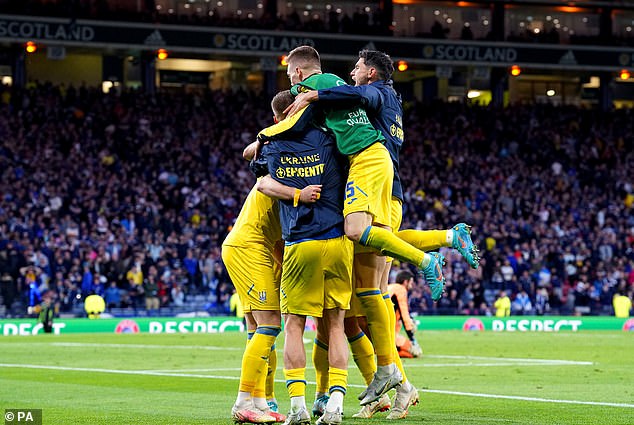 Ukraine have a talented squad too, with the group on a journey towards the Qatar World Cup

Zelensky sent a message to his national team afterwards, thanking them for ‘two hours of happiness’. Such pressure might burden more ordinary souls. Not this group, they are fuelled by the prospect of bringing comfort and pride to those at home.

But come Sunday tea-time in Cardiff, the muscle memory of a footballer will kick in.

‘Since the war started, training and games just gave me those two or three hours to be free in the mind and not think about the situation,’ said Malinovskyi.

‘My parents are in Ukraine, my brother is there. In the time when I’m on the pitch, I don’t think about the war. I just relax, concentrate on my job and what I need to do.’

This is why there was little sense of achievement in Glasgow. It was one step of a far longer journey, not the destination. That would be Qatar. 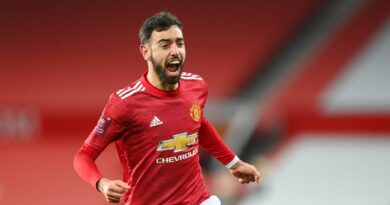