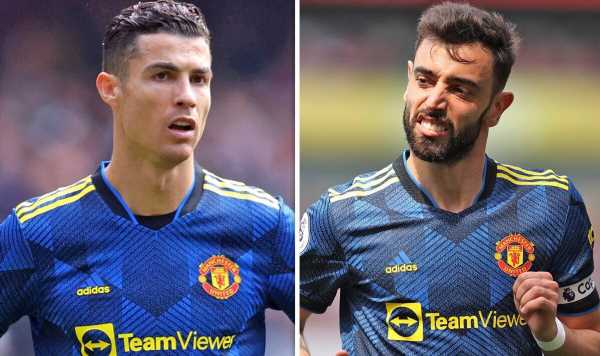 When Manchester United re-signed Cristiano Ronaldo back in the summer, they believed his connection with Bruno Fernandes on the field could secure them the Premier League title. Certainly, it had the makings of a special partnership due to the outstanding talents of both men. But, after Saturday’s 3-1 defeat to Arsenal and with just a few games to go, it seems something is broken between the pair.

Manchester United weren’t as bad against Arsenal as they had been against Liverpool a few days previously.

But Fernandes was equally poor in both matches, with the Portugal international starting to look a shadow of the player he was during Ole Gunnar Solskjaer’s tenure.

With Arsenal 2-1 ahead, United were given a penalty following a handball inside the box.

Many expected Ronaldo to step up, especially given the fact the 37-year-old had already netted earlier in the day.

Instead, however, it was Fernandes who was given the responsibility. Ultimately, the decision to give the former Sporting Lisbon star the duty backfired.

The United midfielder’s tame effort struck the post and it was a turning point, with Arsenal proceeding to score another goal through Granit Xhaka in the closing stages.

Fernandes’ day didn’t get any better after that, either.

The 27-year-old was fortunate to avoid a red card in the closing stages for a challenge on Nuno Tavares that riled both the Arsenal bench and home support.

And Ralf Rangnick decided that, with just six minutes left on the clock, it was time to make his No 18 off and throw on Juan Mata instead.

When United signed Ronaldo in the summer, it wasn’t meant to be like this.

The former Real Madrid and Juventus star was expected to instantly gel with Fernandes and bring the glory days back to Old Trafford after years of Manchester City and Liverpool dominance.

Ultimately, however, that dream is yet to be reality.

Fernandes and Ronaldo are team-mates for Portugal and their best football, as a duo, has come under Fernando Santos.

At United, it’s been a completely different story.

Ronaldo and Fernandes have combined for just three goals this season, despite the duo playing 33 times together across all competitions.

And that’s a damning stat that suggests they’re incapable of operating in the same starting XI.

All three of those combinations have meant Fernandes providing for Ronaldo, rather than the other way around.

And more stats paint a picture of a midfielder who, at the current moment in time, is lost out on the pitch.

In his first few months at United, after arriving from Sporting Lisbon in January 2020, Fernandes scored 12 goals and clocked up eight assists.

Last season, those numbers rose with 28 goals and 18 assists from 58 appearances.

But Fernandes has scored just nine times this term, even if his 13 assists is still impressive.

What’s more, his nine goals have come from just seven matches out of his 42 appearances. Figures that imply something isn’t right in the slightest with a player who many were comparing to Kevin De Bruyne just 12 months ago.

Fernandes was involved in the decision to bring Ronaldo back, bombarding his team-mate with texts in the summer.

Yet the second coming of the United legend hasn’t worked out for him, Ronaldo himself and the rest of the squad.

Erik ten Hag will be the club’s next manager, after agreeing to take over from Rangnick at the end of the season.

And whether he can coax the best from Ronaldo and Fernandes as a duo remains to be seen as a bright new era begins.