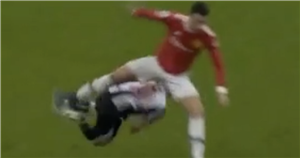 Fuming Newcastle supporters have insisted that Cristiano Ronaldo should have seen red during their Premier League clash against Manchester United at St James' Park on Monday evening.

The Portugal skipper got a yellow card from Craig Pawson for flying in on Ryan Fraser, having swung his left foot in trying to boot the ball and missing it completely.

With United going on to claim a point thanks to the tenacious Edinson Cavani, fans of Eddie Howe's side have looked back at what could have been a game changing incident.

Newcastle had taken the lead through Allan Saint-Maximin in the first-half of a dismal United performance – and many believe the visitors should havde finished the game with a man fewer.

One rival fan said: "First Liverpool, now Newcastle…does Ronaldo have to shoot someone to get a red card?"

With a second saying: "No way Ronaldo is going for the ball here. Wonder if Paul Tierney gives this a red card?"

With a third saying: "Ronaldo being reckless in a challenge. Red all day."

And a fourth saying: "Just saw the Ronaldo foul. If that's anyone else it's a straight red."

Was the tackle worthy of a red card? Tell us in the comments section

BBC Sport pundit and former Chelsea winger Pat Nevin said of the incident: "He caught a glancing blow on Ryan Fraser but he was off his feet and missed the ball.

"Cristiano takes enough hits himself but when your team is in trouble do not take risks like that so he got a bit lucky.

"The referees are letting it flow a bit more and I prefer that but that was right on the edge and some referees would've gone further."

"Today we didn't control the game apart from a few moments. It's all about energy, physicality and who wins the second balls. In all those areas we weren't at our best.

"The good thing is we got a point but the performance needs to be better." 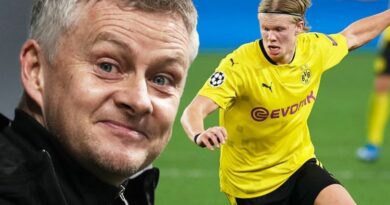