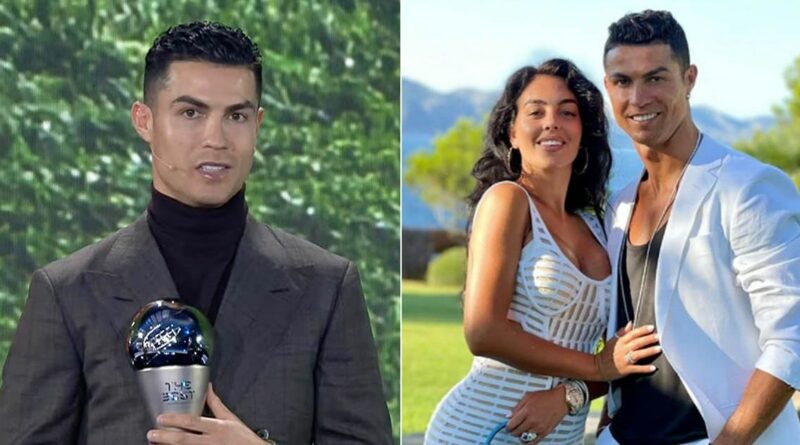 Cristiano Ronaldo may have accidentally announced that he and long-term partner Georgina Rodriguez are in fact married after receiving a special award at The Best Fifa Awards for 2021 on Monday evening.

The Manchester United and Portugal icon was honoured for becoming the all-time record scorer in men's international football, having scored 115 goals across 184 outings.

The 36-year-old got his latest individual honour at the very end of the evening, having been named in the FIFA FIFPro World XI alongside Best Men's Player of the Year Robert Lewandowski.

Although many might have missed the subtle reference to his next of kin, he did in fact refer to Rodriguez as his wife, rather than his girlfriend.

He said: "I have to say thank you to my family, my wife, my kids, soon I will be father again. So I'm really proud, it's a great achievement and it's great to be the goalscorer… of all time."

That comes after GamblingDeals reported that Ronaldo gave Rodriguez an engagement ring that is worth an astonishing £615,000 – which is the most expensive purchased by any footballer.

Rodriguez gave birth to their daughter Alana Martina back in 2017 and cares for Cristiano Jr, born in 2010, as well as twins Eva and Mateo, also born in 2017.

Will Cristiano Ronaldo win another major trophy with Manchester United? Tell us in the comments section

The former shop assistant is currently pregnant with twins, who will be keeping Ronaldo on his toes as he approaches the age of 37.

He added of his plans going forward: "I still have the passion for the game and to score goals.

"I play football since I was five years old. When I go to the pitch, even in training, my motivation is still there. Even 37 soon, I feel good. I keep working hard. I love the game and have the passion.

"I want to continue. I hope to play maybe four or five years, It is all mental. If you treat your body good, when you need it it will give back."

Ronaldo rejoined United in the summer and initially played under his former team-mate Ole Gunnar Solskjaer, before Ralf Rangnick took over until the end of the season.

Despite the club's inconsistent form, the former Real Madrid and Juventus star has been able to score 14 goals across his 21 fixtures and fire them into the Champions League knockout stages.