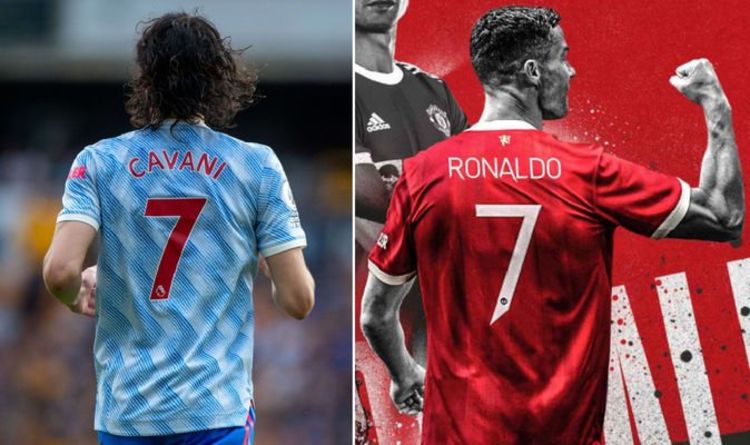 Cristiano Ronaldo has spoken out after Manchester United team-mate Edinson Cavani generously gave up the No 7 shirt for the returning club legend.

Ronaldo’s return to Old Trafford was officially confirmed on Tuesday night with a two-year contract that includes an option for a third year.

The Portuguese comes back to Manchester after 12 years away following a three-year spell in Turin with Italian giants Juventus.

But in the announcement of the player’s arrival, the Red Devils were unable to reveal which shirt number the five-time Ballon d’Or winner would take, with Cavani the owner of the No 7 jersey at that point.

However a United statement read on Thursday night: “Manchester United can confirm that Cristiano Ronaldo will wear the iconic no.7 shirt after returning to Old Trafford.

“The Portuguese superstar famously wore the legendary shirt number during his first spell at United and we can now confirm that Ronaldo will have it on his back once again.

“Ronaldo inherits the number from Edinson Cavani, who wore the shirt last season and in our away win at Wolverhampton Wanderers last weekend.

“As our new signing is allocated No 7, El Matador will switch to No 21, the same number our prolific striker wears for the Uruguayan national team.”

And Ronaldo expressed his gratitude that Uruguayan centre-forward Cavani gave up the shirt number for him.

He said: “I wasn’t sure if it would be possible to have the number seven shirt again. I would like to say a huge thank you to Edi for this incredible gesture.”

United hope that the Portugal captain, 36, will be able to make his second debut for the club against Newcastle a week on Saturday at Old Trafford.

The forward famously spent six seasons as United’s No 7 between 2003 and 2009 and won nine trophies in an illustrious spell with the club.

They included three Premier League titles and the Champions League, while he also won his first Ballon d’Or under Sir Alex Ferguson in 2009.

Ronaldo scored 118 goals and laid on 69 assists in 292 games and throughout his career with Sporting Lisbon, United, Real Madrid and Juventus has amassed 674 goals and 229 assists in 895 matches.

At international level, Ronaldo became the men’s all-time top goalscorer with his 110th and and 111th Portugal goals on Wednesday night.

He scored two late headers in a dramatic World Cup qualifying win against the Republic of Ireland at the Estadio Algarve.

That took him two clear of Iran legend Ali Daei, whose record of 109 goals Ronaldo equalled at Euro 2020 over the summer.

Portugal have meanwhile released Ronaldo from international duty early after he picked up a yellow card in celebrating his late winning goal against Ireland.

After the second of his late brace, he took off his shirt in celebration and was cautioned by the referee, meaning he will miss his country’s match against Azerbaijan due to a one-match suspension.

Portugal face Qatar in a friendly before then but Ronaldo was unlikely to have featured anyway and could now come back to England early, though still faces a quarantine period if he’s not fully vaccinated.