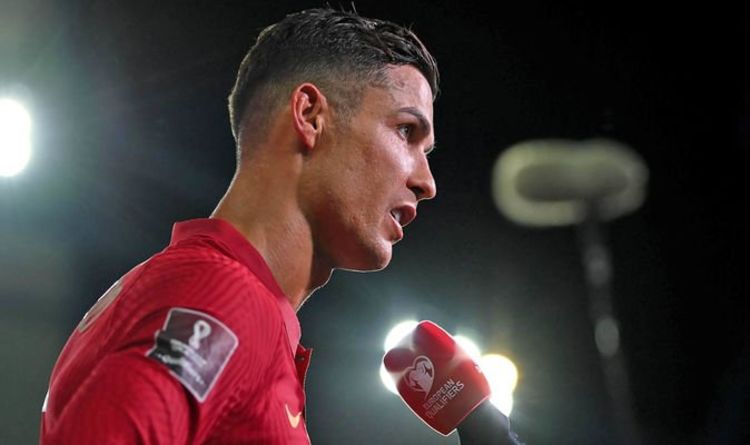 Cristiano Ronaldo’s mother won’t be watching big Manchester United matches at Old Trafford because he’s banned her from doing so, according to Piers Morgan. The Portugal international has re-signed for the Red Devils from Juventus. And he’s expected to make his second debut for the club when they lock horns with Newcastle next week.

“Manchester United is delighted to confirm the signing of Cristiano Ronaldo on a two-year contract with the option to extend for a further year, subject to international clearance,” they said in a statement.

“Cristiano is the first player to win leagues in three different countries, he was also the highest goalscorer in last season’s Serie A and won the golden boot at this year’s European Championship.

“In his first spell for Manchester United, he scored 118 goals in 292 games.”

Ronaldo is now primed to bring his family over to Manchester, too, as he’s done at Real Madrid and Juventus previously.

But he reportedly told Piers Morgan that he’s banned his mother, Dolores, from watching the big games.

Morgan, writing in his column for the Daily Mail, said: “‘My mum is the pillar of the family,’ he told me, ‘and what I have today is because she always supported me.

“‘She worked hard to give her best for her children and especially for me because I’m the youngest in the family.

“‘She suffered to give me opportunity. I remember when I was 12 and I told her I wanted to go to Lisbon to play with Sporting Lisbon’s youth team.

“She said to me, ‘Son, if it’s really what you want, I’m not going to cut your legs and stop you. You can go. It will be difficult for me to leave you but go. Follow your dreams.’

“What made this so poignant was that when she was that exact same age, Dolores was sent to a Catholic orphanage.

“Her own mother had died when she was just six and her father couldn’t cope with bringing up five children on his own, so she was sent away, and experienced tremendous loneliness.

“But that didn’t stop her taking the same risk with her own child so he could fulfil his ambition.

“Now his biggest fan, Dolores gets so nervous watching Cristiano play that he’s had to ban her from going to important matches after she fainted twice in stadiums, once breaking teeth in the fall.

“’She’s not allowed now to watch big games,’ he told me. ‘I say, ‘Listen, I don’t have a father any more. I don’t want to lose my mum, too, so you’re not going to watch quarter finals, semi-finals, or finals.’”

Morgan also revealed he asked Ronaldo about his late father, Dinis, too.

And the United new boy said: “When I asked Cristiano about him, he said: ‘It’s hard to find the right words about my father.

“‘I really don’t know him 100 per cent because he was always drunk. But when he was serious, which was a few times, I feel he was so proud of me.

“‘He’d buy the papers when I was in the paper. He knew that I would be a famous football player.

“‘He knew it and he gave me what he had to help me. But I really don’t know my father. We never had a proper conversation.’”

Speaking when his move to United was confirmed, Ronaldo revealed he was excited about playing in front of fans at Old Trafford again.

“Manchester United is a club that has always had a special place in my heart, and I have been overwhelmed by all the messages I have received since the announcement on Friday,” he said.

“I cannot wait to play at Old Trafford in front of a full stadium and see all the fans again.

“I’m looking forward to joining up with the team after the international games, and I hope we have a very successful season ahead.”