Cristiano Ronaldo returned to Manchester United this summer for a second spell at Old Trafford and hit the ground running by striking four goals in his first three matches. The 36-year-old scored 118 goals in 292 appearances for United during his first spell at the club.

Ronaldo moved to England in 2003 after producing a stellar performance against Man Utd in a pre-season friendly while playing for Sporting Lisbon.

The teenage Ronaldo had already been on the Red Devils’ radar but, after running rings around the United defenders in that match, Sir Alex Ferguson acted quickly to land the player.

Ronaldo impressed on his Man Utd debut against Bolton Wanderers and soon became a regular for the team as he made 29 appearances in his first season.

And his first taste of silverware came at the end of his inaugural campaign at United as his side lifted the FA Cup trophy.

Ferguson was a mentor to Ronaldo and developed him into one of the greatest players world football has ever seen.

MUST READ: Liverpool’s unsung hero vs Porto would be valued at Man City, Chelsea

And the player capped his time in Manchester by winning three Premier League titles and a Champions League trophy.

But before his European success, Ronaldo suffered misery in the Champions League during the 2005/06 campaign.

Ferguson took his side to Portugal to face Benfica in their final group stage match of that season’s competition.

The Red Devils had won just one of their opening five games but still had the chance to qualify for the knockout stages in Portugal.

But it was a disastrous night for Ferguson’s team as they were defeated 2-1 and finished bottom of their group.

Benfica are Sporting Lisbon’s bitter rivals and Ronaldo received a torrid time during the game as he was jeered and shouted at every time he touched the ball.

Ronaldo was visibly upset and decided to show his disdain by putting his middle finger up to the home crowd after he was substituted in the second half.

The player was later reprimanded by UEFA as he was fined £4,000 and banned for one Champions League match.

He served that ban during United’s 3-2 victory over Celtic in their first European game of the following season.

“I don’t have to justify my gesture,” Ronaldo hissed after his run-in with the Benfica fans.

“I felt the public treated me badly. They were unsympathetic and so I gave them my answer.”

Ronaldo ultimately had the last laugh. He notched eight goals as United won the Champions League in 2008 and lifted the European trophy four more times during a nine-year spell with Real Madrid.

And he will be eager to avoid more disappointment with United in Europe this term after they lost their first match to Young Boys. They look to bounce back against Europa League holders Villarreal in their second game. 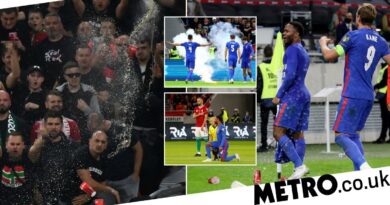