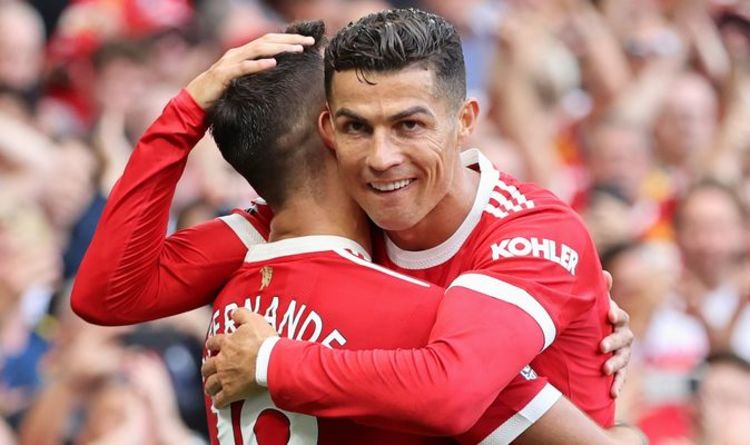 Cristiano Ronaldo delivered a pre-match speech to his new Manchester United team-mates ahead of Saturday’s win over Newcastle United, according to Ole Gunnar Solskjaer. The mercurial 36-year-old bagged a brace on his second debut for the Red Devils to help seal an impressive 4-1 victory over the Magpies at Old Trafford.

Ronaldo was selected to start the match in attack alongside Mason Greenwood, Jadon Sancho and compatriot Bruno Fernandes.

He opened his account shortly before the interval, prodding the ball home from close range after Mason Greenwood’s fiercely-struck effort was parried into his path by Newcastle stopper Freddie Woodman.

Javier Manquillo equalised for the visitors after the break, but Ronaldo quickly fired United back in front with an exquisite two-touch finish in the 62nd minute.

Fernandes and Jesse Lingard got in on the act before the final whistle, with the Red Devils ultimately emerging as comfortable winners in front of a capacity crowd at Old Trafford.

Ronaldo only returned to United at the beginning of the month, but it seems as though his influence is already having a profound effect on the rest of the squad.

Solskjaer revealed after Saturday’s match that his new recruit delivered a rousing speech on Friday evening ahead of his highly-anticipated second debut.

“Ronaldo did a speech to the boys last night,” the United boss told MUTV.

“It’s just perfect for him, you see what he’s about, sensing the moment, smelling the danger. But he’s also evolved into a proper team player.”

United’s win over Newcastle saw them go top of the Premier League table on goal difference, with second-placed Chelsea level on points.

Solskjaer also declared that he showed no hesitation in handing Ronaldo a starting berth for the visit of Newcastle amid pre-match speculation that he would be introduced from the bench.

When quizzed on whether he entertained the idea of naming the five-time Ballon d’Or winner as a substitute, the Norwegian told Sky Sports: “Of course not. This is what Cristiano is about.

“This was a day for everyone to enjoy. When you win a game you enjoy it. When you see fans being happy you really enjoy it.

“There were loads of expectations today. They all delivered. We have to deliver every time. That’s Manchester United. It doesn’t change.

“Cristiano Ronaldo has developed into a fantastic goalscorer. He played a very good game, He dropped in, linked play well.”

Ronaldo will be hoping to maintain his prolific form for United against Young Boys in their Champions League group stage opener on Tuesday evening.

The Red Devils will return to Premier League action with a trip to West Ham United in eight days’ time.