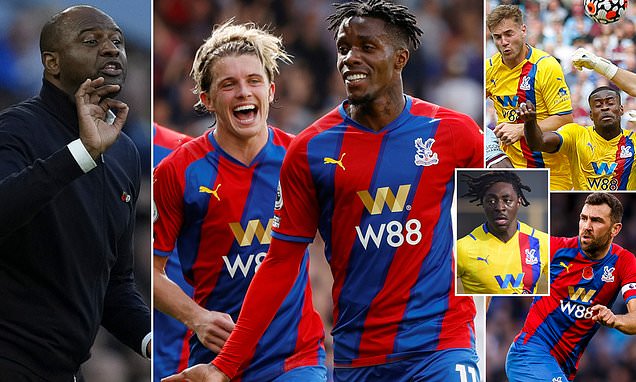 Crystal Palace are turning into one of this season’s surprise packages with new boss Vieira rejuvenating ageing stars, while Zaha and Gallagher grab the headlines… and it looks set to get even better when Eze returns

Unlike many of his rivals, Patrick Vieira is not looking for headlines.

The Crystal Palace boss was keen to walk into Selhurst Park without too much fuss, get his ideas across and earn plaudits for his side’s performances on the pitch, and not just get credit for what he added to his CV as a player decades ago.

A look at the form guide would show Palace as a top six team over the last six matches.

There is a feel-good factor around Selhurst once more, something that had seeped out of even the most ardent supporters in the final days and weeks of the Roy Hodgson era. 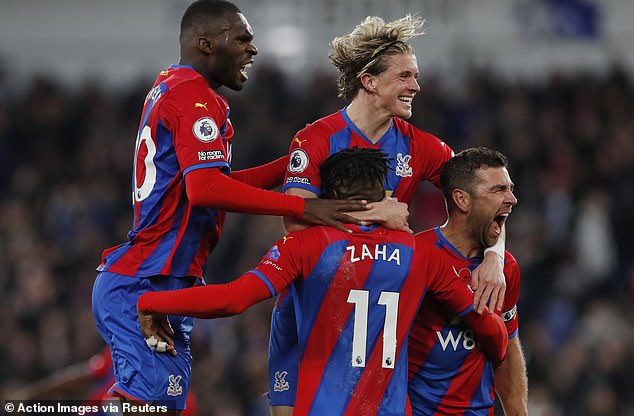 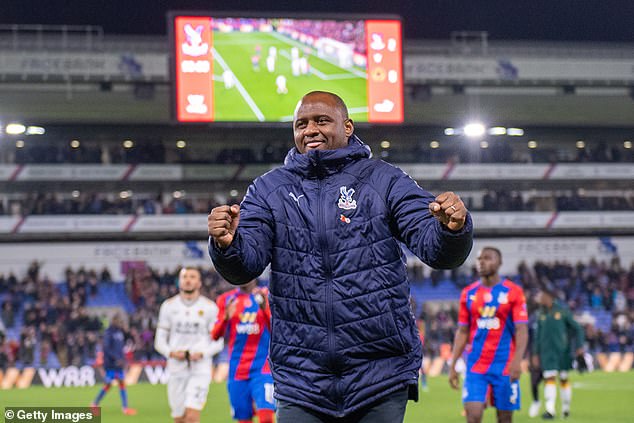 Under Hodgson they would always be steady and the risk of relegation was typically minimal but Vieira seems to have put forth a shift in mentality, one in which players and fans can feel Palace is the place to go to realise ambition.

‘We have high ambitions, the team have big ambitions and myself as well,’ defender Joachim Andersen said recently. ‘We are just trying to win every game.’

Vieira arrived with an ageing squad that was in need of an injection of youth.

Tipped to be in a dogfight akin to what Newcastle, Burnley and Watford find themselves in at the bottom, Palace are proving their doubters wrong with strength in depth, youngsters on the rise, Conor Gallagher in contention for Young Player of the Year and those older players we mentioned have a new lease of life.

It was a real concern among some in the summer just how big a risk Palace were taking clearing the decks at the centre back position.

Cahill started alongside James Tomkins on the final day of last season against Liverpool – one is in the Championship now and the other can’t get a look in at Selhurst Park.

Whether fans rated – or hated – Dann, Cahill, Sakho and the now isolated Tomkins, it is always a risk to bed in so many new players in a prominent position but Vieira has masterfully made it work with summer recruits Andersen and Marc Guehi. 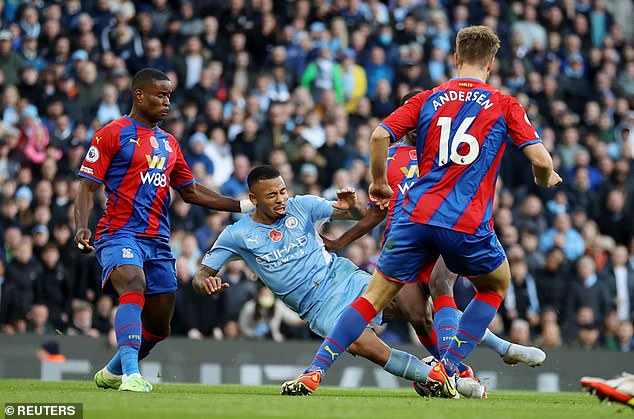 Joining for a combined fee of around £37million, Guehi and Andersen arrived on pretty big money by Palace standards and failure to hit the ground running could have led to worries they had been hasty with the veterans they let go.

What has followed has been a brilliant partnership that appears to strengthen itself by the game.  Talk among some in The Holmesdale is that these two could go on to consolidate their positions at Palace for perhaps the next decade.

Both have proven brilliant with the ball at their feet, which is key to Vieira’s playing identity to build from the back, and it is no surprise as a result to see Guehi and Andersen first and second in passing stats so far this season.

Guehi has made a team high 773 passes in the league while Denmark international Andersen is narrowly behind with 746. 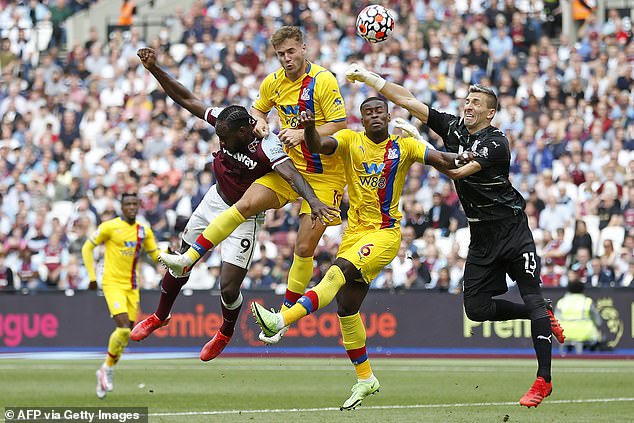 The pair are dominant in the air as well as with their feet, as they lead Palace’s passing stats

Guehi also ranks second in clearances and aerial battles won while Andersen is second in Palace’s squad for interceptions, for which he has had 17.

Palace fans have been struck by the pair’s leadership and while there have been regrettable moments – Andersen caught on the ball to be robbed in possession allowing Kelechi Iheanacho to go one-on-one before scoring for Leicester – and only four league clean sheets, this burgeoning partnership is a major plus for the new regime.

‘The way we approach the games is with an attacking mindset and a front-foot mindset,’ Andersen explained recently. ‘This is obviously something Palace had to change in their mentality over the last couple of years because they played differently, but now we are trying to change that and it is already working well.

‘It is the way I have been playing for the majority of my career, this style, and I really enjoying playing football like this.’

There was a time not too long ago when even a half-fit Wilfried Zaha was a necessary starter.

Palace found themselves so dependent on their star man that the alternative was rarely considered an option.

A sign of Palace’s growth under Vieira arrived earlier this season with Zaha sidelined from injury.

When he returned to fitness he was back into the squad – starting on the bench. Palace didn’t need to rush him and have the luxury now of being able to re-introduce players from the bench with competition for places keeping levels high. 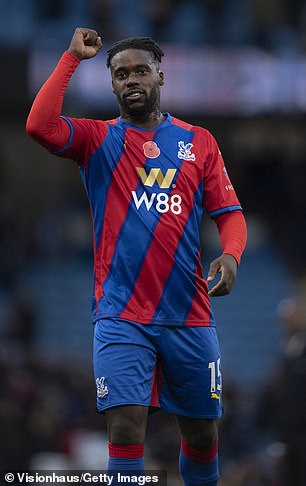 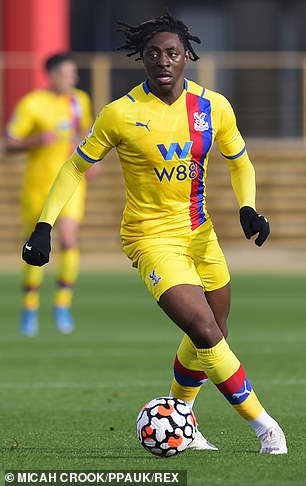 For the likes of Jeffrey Schlupp it has proven something of an adaptation going from a regular starter under Hodgson to a cameo role off the bench these days.

There’s Luka Milivojevic, too, the club captain who joins Schlupp on the bench most weeks.

Michael Olise, only 19, feels closest to transitioning from the bench to the starting XI after joining from Championship side Reading in the summer.

The message is clear: Palace have a much stronger and deeper squad than a year ago and it is showing.

For the likes of Olise and Schlupp – Milivojevic seems to only get the call-up if Palace need to see games out – to propel themselves into Vieira’s thinking all they can do is seize their chance when they get it.

Take that Leicester game, which saw Andersen make a rare error, and Olise and Schlupp both made vital contributions off the bench. 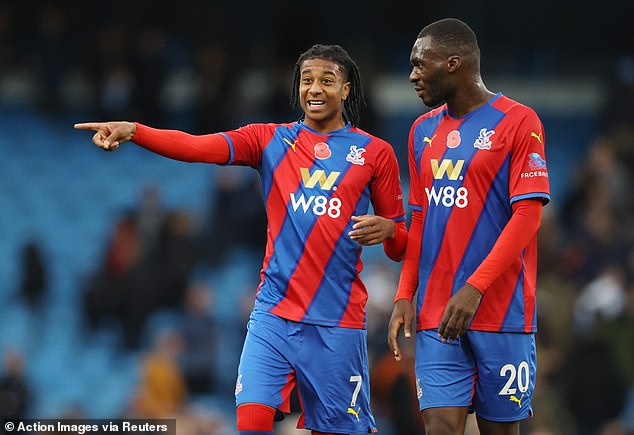 Olise was sent on first, replacing an ineffective Jordan Ayew in the 53rd minute and eight minutes later he had fired in his first goal for Palace.

Then came Schlupp, sent on for Gallagher before scoring 48 seconds later.

Schlupp finished with the joint most attempts in the game (four) despite only playing 19 minutes in total.

It is that sort of competition and desire that is propelling Palace up the table.

Oh, and they have tricky winger Eberechi Eze to come back soon, too. An embarrassment of attacking options now lay at Vieira’s door.

GALLAGHER IS A DIAMOND

One player that is unlikely to find himself warming Palace’s bench any time soon is Gallagher.

The England Under 21 star has been a breath of fresh air in south London on loan from Chelsea.

He may only be 21, and in just his second Premier League season, but Gallagher looks so composed on the ball and always seems willing to try and make something happen instead of playing it safe.

Chelsea boss Thomas Tuchel is a busy man, naturally, but even he is mesmerised by the work of his loanee.

‘He is not hard to follow because he is standing out every single matchday so it’s an easy one to follow and credit to him,’ Tuchel said last week.

‘We had long talks in pre-season and we imagined he could stay and fight for his place here. 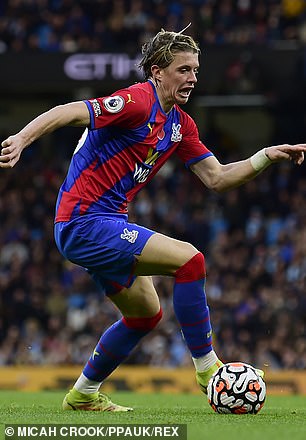 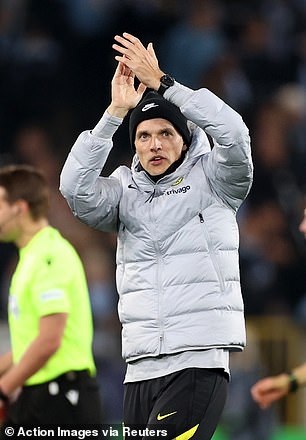 ‘But we decided that when the talks came up with Patrick Vieira at Crystal Palace, he understood the role he could have in the Premier League at the club. He wanted to take the challenge.

‘We also agreed to let him go because we thought, in the end, this could be the right thing to do. You need a bit of luck and, of course, a lot of quality.’

Gallagher is desperate to do well, and in the right sort of way it shows on the pitch.

He’s accepted previously that he needs to add goals and assists to his game to make it as a top-level attacking midfielder and to do that he is putting in the hours.

Tuchel added: ‘Conor’s heart is so, so big; you could wake him up at 4am and he’ll start running and sprinting, collecting balls and winning duels. This is what he does. He feels good and has the trust of the club and manager.

‘Right now, it’s the beginning of November and he is an important member of the Crystal Palace squad. It’s good where he is and there is no need to change this. He feels good and feels a huge part at this club.’ 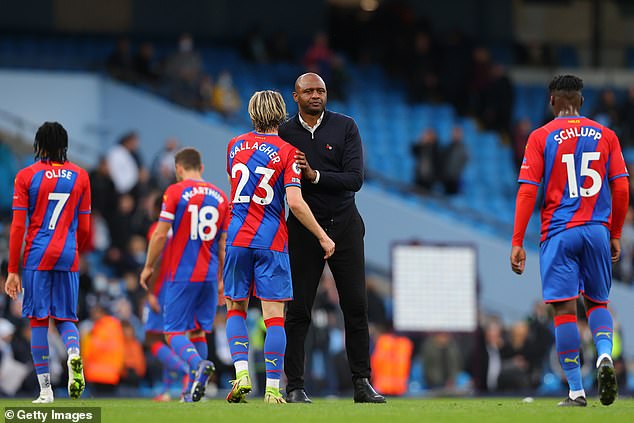 Gallagher’s fine form is evidenced by the fact that he is Palace’s leading scorer in the league so far with four goals. He is also top of Palace’s Premier League assist chart with two.

In fact, no player in the Palace squad has taken more shots than Gallagher in the league this season with 23.

Palace brought fellow midfielder Will Hughes in as well in the summer and yet he can’t get a look in with his team-mate impossible to drop in this form.

Gallagher is flying under the guidance of Vieira and if he can keep this up it will be hard for Gareth Southgate and England to ignore him for much longer.

Not quite a case of Benjamin Button but some of Palace’s old guard have definitely been given a new lease of life since Vieira arrived.

Take Joel Ward and James McArthur as examples. Both found themselves as dependable under Hodgson but were largely unspectacular and were viewed as nearing the tail-end of their Palace careers.

But fast forward to the Vieira version of Palace and both Ward and McArthur are thriving.

Ward, 32, will reach a decade at Palace next season and he deserves an immense amount of credit for adapting quickly to Vieira’s demands.

The right back has performed so well that for the first time in nine years he received the club’s Player of the Month award last week. 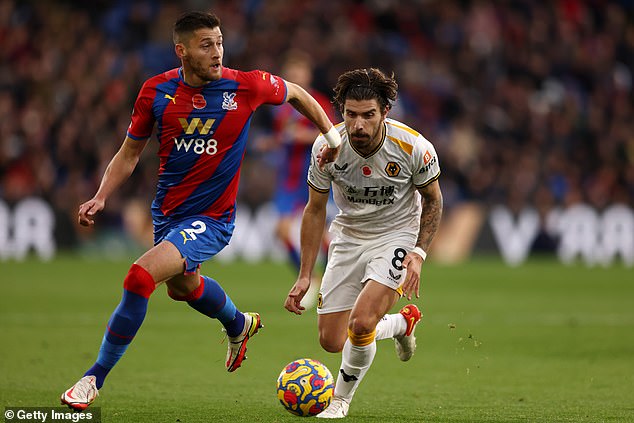 ‘Joel is one of the warriors,’ Vieira said recently. ‘He is somebody that if you are going into a fight, you will want to take him with you because you know that he will be there.

‘He is open-minded, and it is really a pleasure working with him because of his focus, his work ethic, and he is a lovely man as well.  I am not surprised at all that he is doing that well.’

Then there is McArthur, a contender today to be the club’s Player of the Year.

Despite being 34, the Scot is still tireless in the middle of the park, and remains hugely underrated for those that do not watch Palace week to week. He deserves credit for resurrecting a Palace career that could so easily have been on the slide.

Another keeping Hughes and Milivojevic out the side, it is hard to envisage a Palace line-up without a healthy McArthur in it.

A quiet and unassuming character, McArthur has parked his ego to do the dirty work and to run the game like the conductor of an orchestra in Palace’s midfield, allowing Gallagher the license to push on.

‘He is valuable, he’s our captain, and so he has a responsibility to bring his leadership to the squad,’ Vieira said. 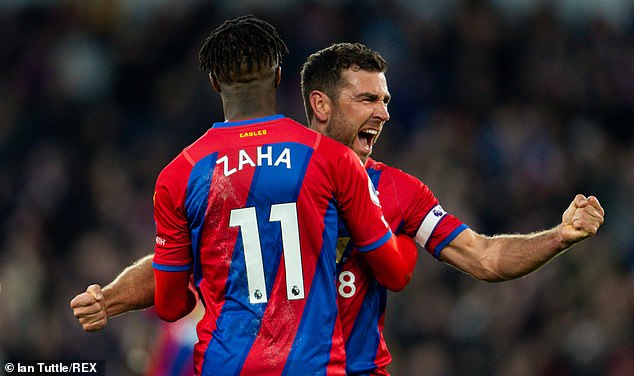 PS – THE FUTURE LOOKS BRIGHT, TOO!

The good atmosphere at Palace extends beyond that of the first team dressing room, too.

South London has long been a hotbed for young talent – many of which may never play for Palace – but following a £20m investment into their academy base on Copers Cope Road in Beckenham, there is hope of a golden generation coming through the doors.

With Category 1 academy status awarded this year and multiple graduates starting to make viable cases for first team minutes – Jesurun Rak-Sakyi, 19, and Scott Banks, 20, fall in that group – there is plenty to be optimistic about.

The likes of Zaha, Tyrick Mitchell and Aaron Wan-Bissaka, now at Manchester United, have all successfully made it off the production line into first-team football and more look set to follow.