A largely uninspiring encounter low on quality was not enough to end the winless starts to the Premier League season for either side.

But for Norwich it did halt a 16-game top-flight losing streak and got Farke’s side off the mark after a torrid start to the campaign.

He said: “I will take this. It is definitely a good feeling. Of course we are happier when we win a game and there were chances to win this game.

“It was a difficult game but we’ve had a difficult start with our fixtures, the Covid outbreak, cancelled friendlies, it’s been very difficult.

“It’s such a tough place to come, Turf Moor, it’s very physical and intense, they are an experienced side.

“You could feel Burnley were on it so to be able to show steel and resilience and get our first point and our first clean sheet it feels really good.

“Of course we would have preferred if we could have used one of our chances in the second half but we can’t complain. It is priceless to be off the mark with our first point and first clean sheet.”

Although they were on the back foot for much of the afternoon, Norwich had chances of their own with Max Aarons flashing an early shot wide, then forcing Charlie Taylor to clear from under his own crossbar in the second half.

Teemu Pukki also harried a Burnley defence in which Nathan Collins made his Premier League debut with Ben Mee injured while Mathias Normann hit the top of the crossbar.

Farke added: “We were sometimes a bit soft, a bit naive, a bit inexperienced against a very physical side with a direct approach, so in some ways this was more valuable than doing it against Liverpool or Chelsea.

“I am pleased for my lads. It has not been easy with all the criticism.

“The point and the clean sheet will help a bit in the table but even more with the mood and the confidence.

“It’s a first step. It’s not like this point will guarantee we stay in the league. Many more steps are needed but it’s a good first step.”

Burnley may reflect on a missed opportunity having seen better performances than this against superior opposition go unrewarded.

Sean Dyche’s 400th game at least ended in a first league clean sheet of their season but there was no end product in the absence of the injured Maxwel Cornet.

“There was a lot of good stuff, good play, effective play,” Dyche said.

“It’s about finding that cutting edge at the moment and scoring a goal is a challenge. We’re getting in some key areas, it’s that moment of clarity and moment of quality, it’s so close.”

Burnley had more of the ball and more sights of goal – such as they were – but could not end a winless run at home which now extends to 14 league fixtures.

“They’re all stats and facts,” Dyche added. “The last one doesn’t guarantee you the next one, I’m well aware of that but we’ve shown over the years that we can produce and I believe we will again.

“We’ll find a way to score goals, we’ve got four good strikers. We had a slow start last season and picked up and had a strong middle and end.

“It’s important we do that again. I believe in the way the players are playing but we’ve got to find that cutting edge.” 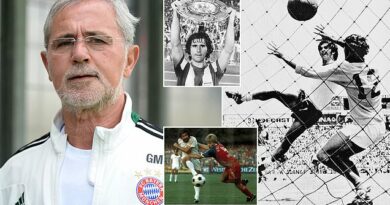 Gerd Muller, the striker known as Der Bomber, was a genius in the box

Philippe Coutinho snubbed by Liverpool after contact over potential transfer