The announcement that Donal Conway will be standing unopposed in the election for FAI president will not have caused a stir in Irish football’s administrative circles.

This move was flagged last month around the launch of the Governance Review Group (GRG) Report and there were no rumblings of an alternative candidate waiting in the wings.

Conway declared that his presidency was ‘finished’, in the sense that he would not get to see out his four-year term.

Staying on for one more year, as part of the interim solution recommended in the report, would effectively be his parting act. He has become the face of the FAI’s plans to sell a document that would shake up the structures of Irish football.

Conway has taken a central role in a series of roadshows across the country in the past week that have presented the report’s mission statement. Letterkenny and Claremorris were the first stops on that journey, with Conway the FAI’s main speaker.

In reality, an alternative candidate for President would effectively have been coming from a similar parish of candidates under the existing criteria.

Given that Conway’s handling of the first FAI Council meeting since the crisis that engulfed the association was, in general, quite well received by those in attendance, then again it would have been slightly unusual if another member had put themselves forward for a contest that could be rendered meaningless if the GRG proposals are rejected and anarchy reigns.

The voting on the GRG report at this Saturday’s EGM will be more important than any election.

So, from the FAI’s perspective, it’s no big deal that Conway will stand unopposed.

The problem is that they can’t control the perception of the outside world. And that perception matters in their attempts to regain the trust of the wider public – even though opening statements from Sport Ireland, ahead of their return to government buildings tomorrow, would suggest they are firmly on board with the implementation of the GRG plan. That’s hardly surprising seeing as their nominees were leading the steering group that devised it.

FIFA and UEFA have endorsed the ideas too.

But winning over the public remains the FAI’s most important battle.

There are people who have tuned out of the day-to-day updates on the state of affairs in Abbotstown.

What they do know is that the FAI have made noises about the need for reform after a damaging period which highlighted how it had become an ineffective old boys club that was resistant to change.

What they do know is that during a hectic run of Dáil dates for Irish football, Minister Shane Ross updated the Oireachtas Committee with the news that the remaining members of the FAI board would be standing down at the next AGM.

That AGM is now looming on the horizon. This Saturday’s EGM will shape the agenda for what happens seven days later.

And if one of the headlines to emerge from the day is that the FAI president – a board member since 2005 – will be staying on for another year, then a backlash is inevitable, no matter how far in advance it was signalled.

There is a view that the FAI hierarchy are moving too fast by trying to run through governance changes before all reports examining their affairs have come to light. Former general secretary Brendan Menton has articulated this point.

Admittedly, the FAI do find themselves in a difficult position as normal order needs to be restored at Abbotstown heading into a vital period with regard to sponsorships and strategy decisions.

Some form of stability is required; yet there is a perhaps a difference between being on hand to offer advice and actually retaining an official title and all that goes with it.

The bottom line here is that the FAI is a damaged brand.

Conway and other board members have argued that some of the revelations about the FAI were a surprise to them too – and it’s natural that those who were out of the loop will find certain accusations deeply unfair.

But any kind of association with the old regime is proving to be problematic for individuals eyeing up a role in the rebuilding mission.

The FAI will have to accept the consequences of that. 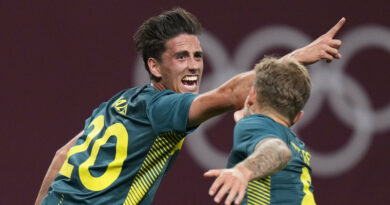 Olyroos stun Argentina to get Games campaign off to a flyer