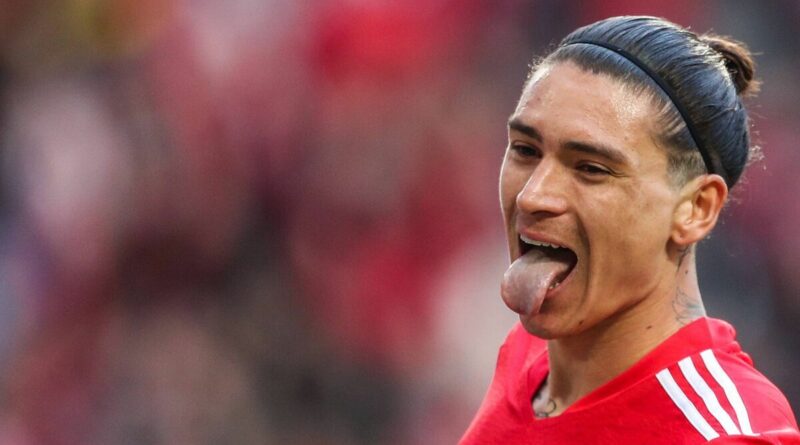 Liverpool’s blockbuster swoop for Darwin Nunez could lead Manchester United to plot a move for Bayern Munich goal machine Robert Lewandowski. That is according to the Daily Star, who claim the Red Devils will try to tempt the wantaway striker away from his ideal destination of Barcelona.

Lewandowski is one of a host of Europe’s elite strikers expected to be on the move this summer, with the prolific Poland international outlining his intention to leave Bayern. The 33-year-old has entered the final year of his contract, and publicly declared his career at the Allianz Arena is over.

United are expected to undergo a major rebuild this summer following a miserable end to last season under interim boss Ralf Rangnick. Former Ajax boss ten Hag has reportedly been handed a transfer budget in excess of £100 million, and in-demand Benfica star Nunez was said to be at the top of the shortlist.

However, reports over the weekend indicate Liverpool are closing in on a club-record deal for the Uruguay international. The FA Cup and Carabao Cup winners seem to have moved swiftly to secure a replacement for Sadio Mane, who has been heavily tipped to make the move to Bayern.

JUST IN: Man Utd ‘not afraid to walk away’ from Frenkie de Jong deal despite Darwin Nunez defeat

Nunez enjoyed a standout campaign with Benfica, scoring 34 goals in all competitions including two strikes against Liverpool in their Champions League quarter-final clash. The deal undoubtedly represents a risk for Jurgen Klopp, but the Reds appear confident the 22-year-old can fulfill a long-term role in attack.

This likely setback looks to have made United revert to type in the post-Sir Alex Ferguson era. Having identified a forward who could potentially lead the line for the next decade, the Red Devils look to once again be targeting a veteran forward to act as a stopgap.

Lewandowski’s pedigree can not be questioned, with the Poland legend scoring an astonishing 344 goals in just 374 appearances for Bayern. The forward will celebrate his 34th birthday in August, but has shown no sign of slowing down anytime soon.

Bayern are said to be demanding in excess of £40 million for their star striker, but that price tag does not look to have deterred Chelsea or United from expressing an interest. It could however prove prohibitive for cash-strapped Barcelona, with Spanish football president Javier Tebas insisting the Catalan giants have no chance of completing the deal unless they sell players to comply with financial regulations.

Chelsea’s negotiations over a second exit for Romelu Lukaku could pave a clear path for United to make their move. Much like Raphael Varane’s arrival last summer, it would be a case of revisiting a former Ferguson target almost a decade on.

Lewandowski revealed his conversations with the ex-United boss in December 2020, telling France Football: “After my second year in Dortmund, I had a conversation with Sir Alex Ferguson. He wanted me to come to Manchester.

“I was very interested. I can even say I was ready. But Dortmund didn’t want to let me go. It didn’t upset me more than that because things were going well with Borussia.”

The signing of Lewandowski would be a statement of intent, much like the recent arrivals of the likes of Edinson Cavani, Falcao, Cristiano Ronaldo, Zlatan Ibrahimovic. There would likely be few complaints from United supporters should the club land one of the best strikers in world football after a sixth-placed finish.

However, to go from targeting Nunez to mulling over a move for Lewandowski represents a drastic shift in priority. Rivals Manchester City and Liverpool look set to have signed their leading frontman for the coming seasons in Erling Haaland and Nunez respectively.

United already have club legend Ronaldo at their disposal, who still scored 24 goals despite being subject to criticism for much of the season. Rangnick warned the Red Devils are six seasons behind their rivals, but the signing of Lewandowski would be another attempt at a quick fix.

The names so far linked with United suggest ten Hag is planning a long-term rebuild to create a team capable of closing this gap over the coming seasons. However, the switch of attention from Nunez to Lewandowski suggests the Red Devils could still be working off the same tired blueprint.