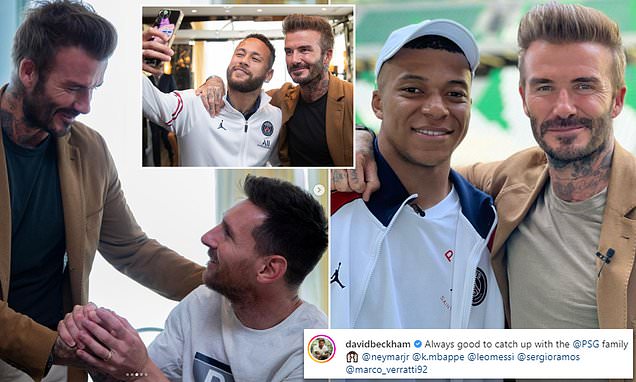 David Beckham heads to Qatar to greet Lionel Messi, Neymar and Kylian Mbappe in the latest chapter of his controversial £10m ambassadorial role with the Gulf state leading up to this year’s World Cup

David Beckham has headed over to Doha to meet with the Paris Saint-Germain squad, who are in Qatar for a tour.

It marks the latest instalment in Beckham’s controversial £10million ambassadorial role with the Gulf state, which he has been criticised for due to the fact homosexuality is banned and women’s rights are severely restricted there.

‘Always good to catch up with the @PSG family,’ Beckham wrote alongside pictures of himself greeting Kylian Mbappe, Neymar, Lionel Messi and Sergio Ramos.

PSG are owned by Qatar Sports Investments, who have had control of the French giants since 2011 and made them one of the richest clubs in the world.

Beckham’s ambassadorial role will see him promote the 2022 World Cup in the country, which begins this November.

The 47-year-old has made several previous appearances at other events in Qatar, with the most notable of which arguably being at the Qatar Grand Prix last November. 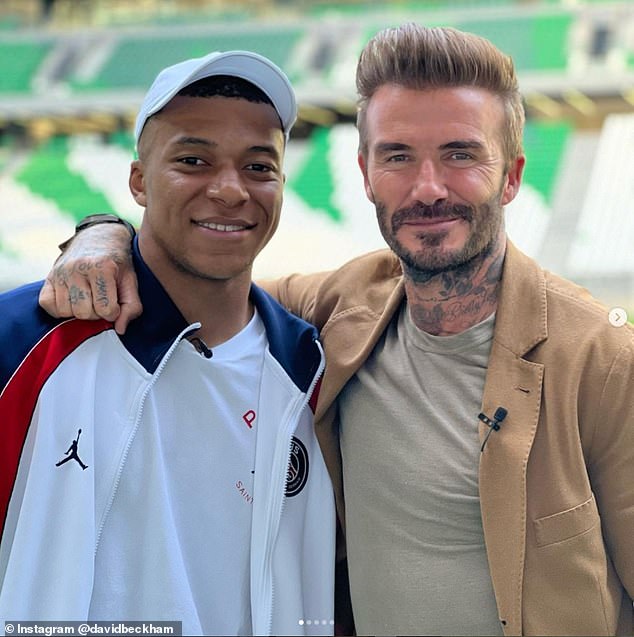 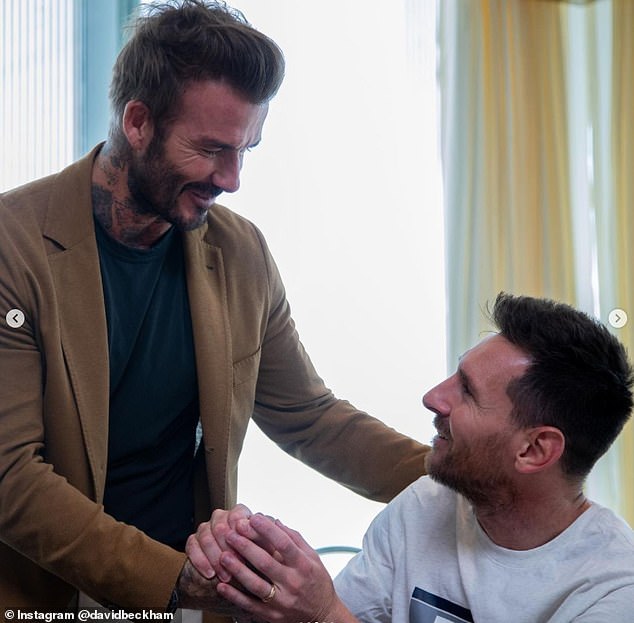 Beckham also greeted Lionel Messi as part of his trip to the Gulf State, who are paying him £10m as part of an ambassadorial role 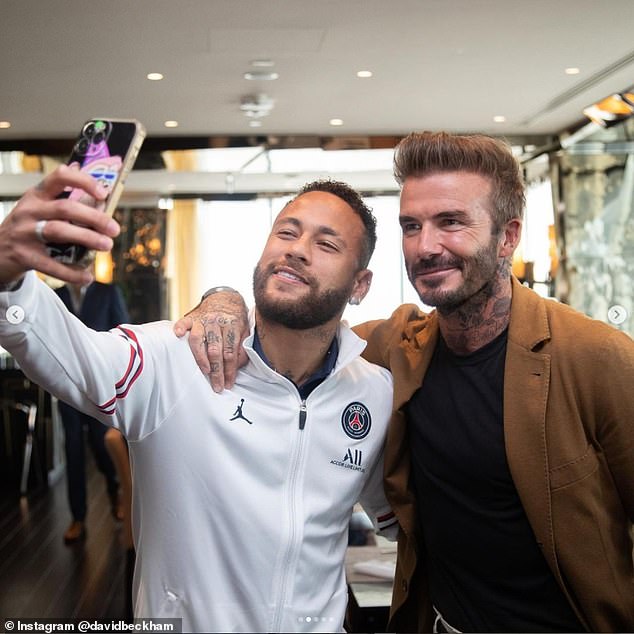 Neymar takes a selfie with Beckham, whose role with Qatar has fallen under scrutiny

He shared a picture on his Instagram shaking hands with Lewis Hamilton, who won last season’s race, with the caption: ‘Congratulations on your win champ’.

Beckham played for PSG in 2013 after signing a short-term deal, making 10 appearances. He announced that he would retire that year but played enough games to claim a French League winners’ medal.

But it’s Beckham’s role in promoting the World Cup that will inevitably see him fall under greater scrutiny in the coming months.

Human rights groups believe over 6,500 migrant workers from India, Pakistan, Nepal, Bangladesh and Sri Lanka have died on building sites for new World Cup stadia in Qatar since it won the right to host the World Cup in 2011.

England manager Gareth Southgate has held discussions with his squad back in March over the ongoing challenges in Qatar and opening a dialogue on how England could show their opposition.

It prompted Qatar 2022 chief executive Nasser Al Khater to tell Southgate to ‘pick his words carefully’ after he questioned their suitability of World Cup hosts. 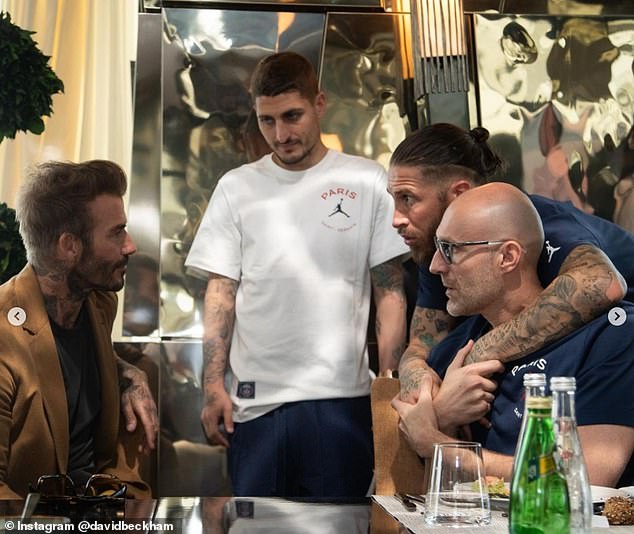 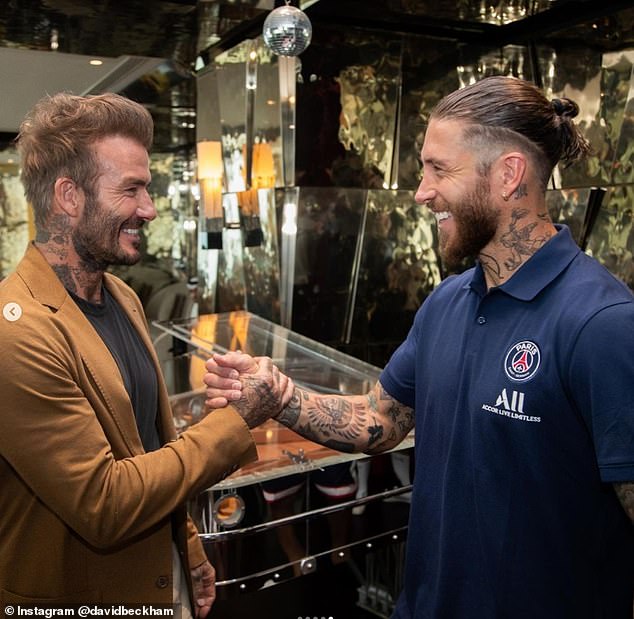 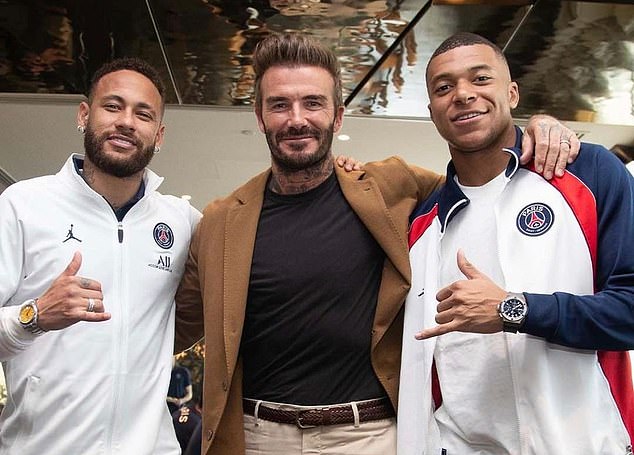 ‘Is he basing his opinions and his public statements on what he has read? Because it is kind of an issue when you just base an opinion on which you are very vocal about on things which you have read.

‘Somebody with a lot of influence such as Southgate, somebody with a big audience that listens to what he has said has got to pick his words carefully. I think before making statements like that when it comes to the workers, he needs to come here, speak to workers, understand what workers get out of being here.

Last week, PSG star Messi was pictured arriving Saudi Arabia in his own ambassadorial role for tourism in the country. 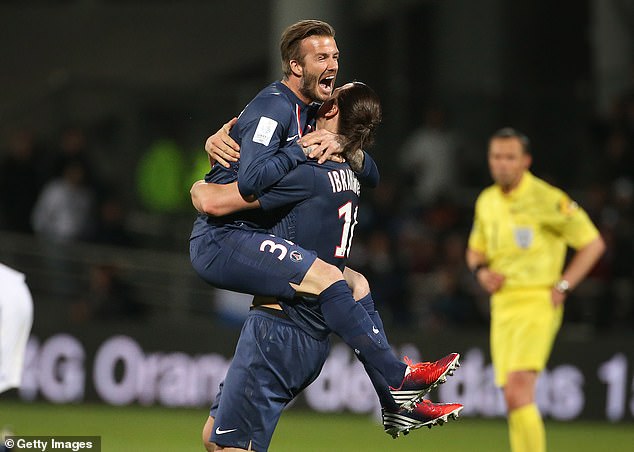 Beckham saw out the final days of his career with PSG, playing 10 times for the club in 2013 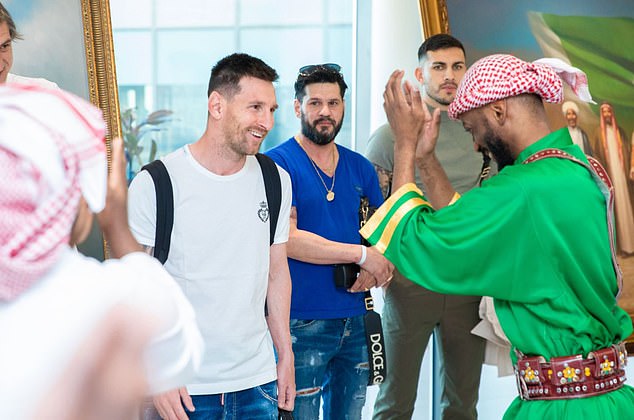 Messi was pictured arriving in Saudi Arabia on Monday evening, where he was referred to as an ambassador for tourism

Back in February, after it emerged via The Telegraph that Messi had been approached by the Saudi tourism board, families of prisoners of conscience wrote a letter that urged Messi not to get involved.

The letter was organised by human rights body Grant Liberty and, via The Independent, said: ‘You are an inspiration to millions and what you say and do really matters. To put it bluntly – you have enormous power, but with that power comes great responsibility.

‘The Saudi regime wants to use you to launder its reputation. Prisoners of conscience in Saudi Arabia have been tortured, sexually assaulted, and held in prolonged solitary confinement – often for months at a time – on an industrial scale.’ 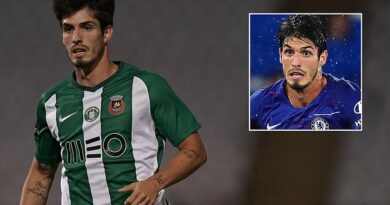