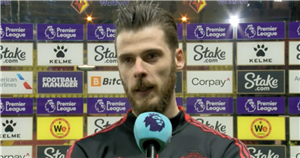 Manchester United keeper David de Gea has admitted that "something is very wrong" at the club after yet another humiliating defeat, this time at the hands of Watford.

Ole Gunnar Solskjaer's side were beaten 4-1 at Vicarage Road in a game which also saw United captain Harry Maguire get sent off.

The defeat – United's seventh of the season – has put Solskjaer's future at Old Trafford in serious doubt.

The Red Devils are already 12 points behind league-leaders Chelsea and look hopelessly devoid of confidence and rhythm.

Despite saving two penalties during the game, de Gea described the Watford defeat as "nightmare after nightmare", but insisted to reporters that fault lay with the players, rather than with the manager.

"There's not much to say – it was embarrassing to see Man United play like we did today. It's not acceptable," the 31-year-old said.

"It's easy to blame the manager or the staff but sometimes it's the players. We need to show much more than we are doing.

"Embarrassing first half – we could've conceded four goals in 45 minutes. It was hard to watch the team playing today – it was nightmare after nightmare. It's not acceptable."

De Gea insisted that the players were doing their best to find solutions but admitted that something was "very wrong" within the club.

Are Man United fans right to boo the team? Let us know what you think in the comments section below…

"This is not Manchester United or the way we ought to play – it's difficult to say more than that," he said.

"It's been very bad for a long time – a club like Man United we have to be fighting for trophies and fighting for big things and to be honest we are far from that."

After the match, United midfielder Bruno Fernandes was involved in a exchange with a fan who booed the players as they came over to the away end after the match.

Solskjaer was also seen apologising to fans by raising his hand them, though some claim this could have been him waving goodbye.