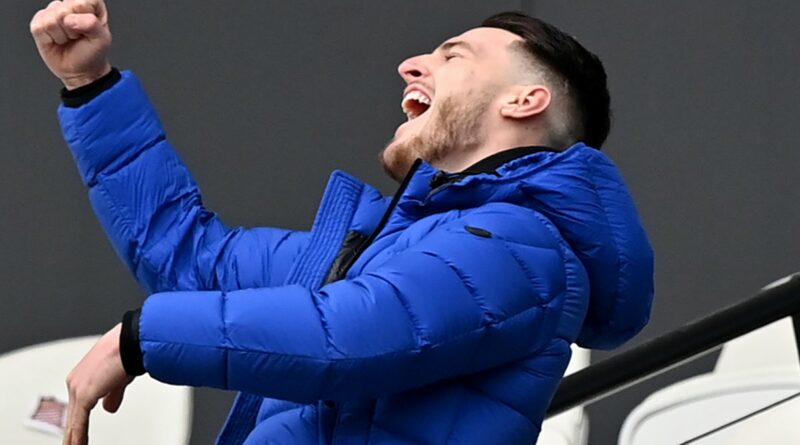 England midfielder Rice will remain on the sidelines for the time being as a result of the knee injury he sustained on international duty last month, but his club coach Moyes said: “Declan’s been training really well.

“It’s all gym-based at the moment. He’s working really hard in the gym because he wants to get back as quick as he can.

“He’s obviously got other reasons, he knows he’s got the Euros coming up in the summer as well.

“As you can imagine, for any club to lose Declan Rice would be a big blow, but at the moment we’ve been able to carry it and I hope we can continue to do so.”

West Ham visit Newcastle on Saturday, with recent wins over Wolves and Leicester having taken them back into the top four of the Premier League.

Victory on Tyneside would move them above Leicester, who are in FA Cup semi-final action on Sunday, and into third place ahead of next weekend’s home game with fifth-placed Chelsea.

“We’re just trying to pick up the points and we’ll worry about the Chelsea game when it comes around,” Moyes said, when asked if climbing into the top three would strike a psychological blow ahead of that London derby.

“If we keep that going, who knows? Of course I’d be disappointed [to miss out on the top four] because I want to try and make it.

“But I’m not going to weigh the players down with the expectation that they should be making the Champions League. That would be completely unfair on our squad and players that most people would probably have put us just outside the bottom three or four.

“But if I don’t keep pushing those teams hard then I would be disappointed. We’re going to try and pull out results as much as we can. I want to take it as long as I can, right to the end and see where we end up.”

West Ham’s trip north is a reverse of the season’s opening-day fixture, when Newcastle won 2-0 at the London Stadium through goals from Callum Wilson and Jeff Hendrick.

The fortunes of Moyes and Steve Bruce have travelled in opposite directions since, with the Newcastle manager having endured a turbulent season. But Newcastle eased some of the pressure on them by claiming a first win in eight matches at Burnley last weekend, and Bruce’s men are now six points above 18th-placed Fulham with a game in hand.

Moyes said: “I think Steve’s done a good job, he’s done what he’s been asked. He’s had really good support from his owner in difficult times.

“Because of that, I think you’ll see Newcastle staying in the Premier League when many people thought there should probably be changes.

“I know many owners have been criticised quite a lot for their decisions. But maybe the owner there has made the right decision.”