You could say it was a little taste of the standard Declan Rice wants to reach, as well as a flavour of the team chemistry that Gareth Southgate hopes will bring England up a level.

Mere minutes after winning the Champions League final, Mason Mount was FaceTiming his childhood friend to show him his medal.

“It was straight after, from the dressing room, buzzing,” Rice laughs. “But we’ve got to be a bit careful because people will say we’re in love. Every time we FaceTime, all of his team-mates jump in and say: ‘You two need to stop talking to each other.’”

It is one other reason the talk is that Rice himself will join Mount at Chelsea this summer, or go to Manchester United. The increasing expectation is that he will leave West Ham United, because he is already getting to the level where he should be competing for the Champions League.

Rice starts to talk about where he was for the 2018 World Cup, and all of the celebrations while he was on holiday in Dubai, which is of course when he was officially a Republic of Ireland international. The 22-year-old is part of a unique group of five players at Euro 2020, who previously won full caps for other national teams, with Rice having earned three.

The West Ham midfielder reveals that he had already made his decision to switch by the time of the 2018 World Cup, stating: “It was done then.”

Some on the Irish side would disagree, given that the feeling right up to the end of the year was that there was still a chance he would commit to the country of his parentage.

As Rice talks, though, it quickly becomes apparent that his own feelings were only going one way.

“We spoke about it so much but obviously growing up watching England in tournaments… you just feel the proper buzz, the effects and the desire of the country for the players to do well. It was like that, even in Dubai. There were thousands of English fans. You saw when [Kieran] Trippier scored [against Croatia], all the fan zones in England going crazy. That’s what I want to be a part of now. I just can’t wait to experience this and just get the real buzz and excitement of the tournament.

“I remember watching the Panama game, the Tunisia game, the Sweden game. It was incredible. The singing before the game, the national anthem, just being a part of it. I was a fan for that tournament so to be part of this tournament is unbelievable.

“I was speaking about it yesterday to Mase when we got handed the legacy caps, the journey we have both been on together. It is incredible. We are 22 and about to represent our country at a major tournament. We both cannot wait for it to come around.” 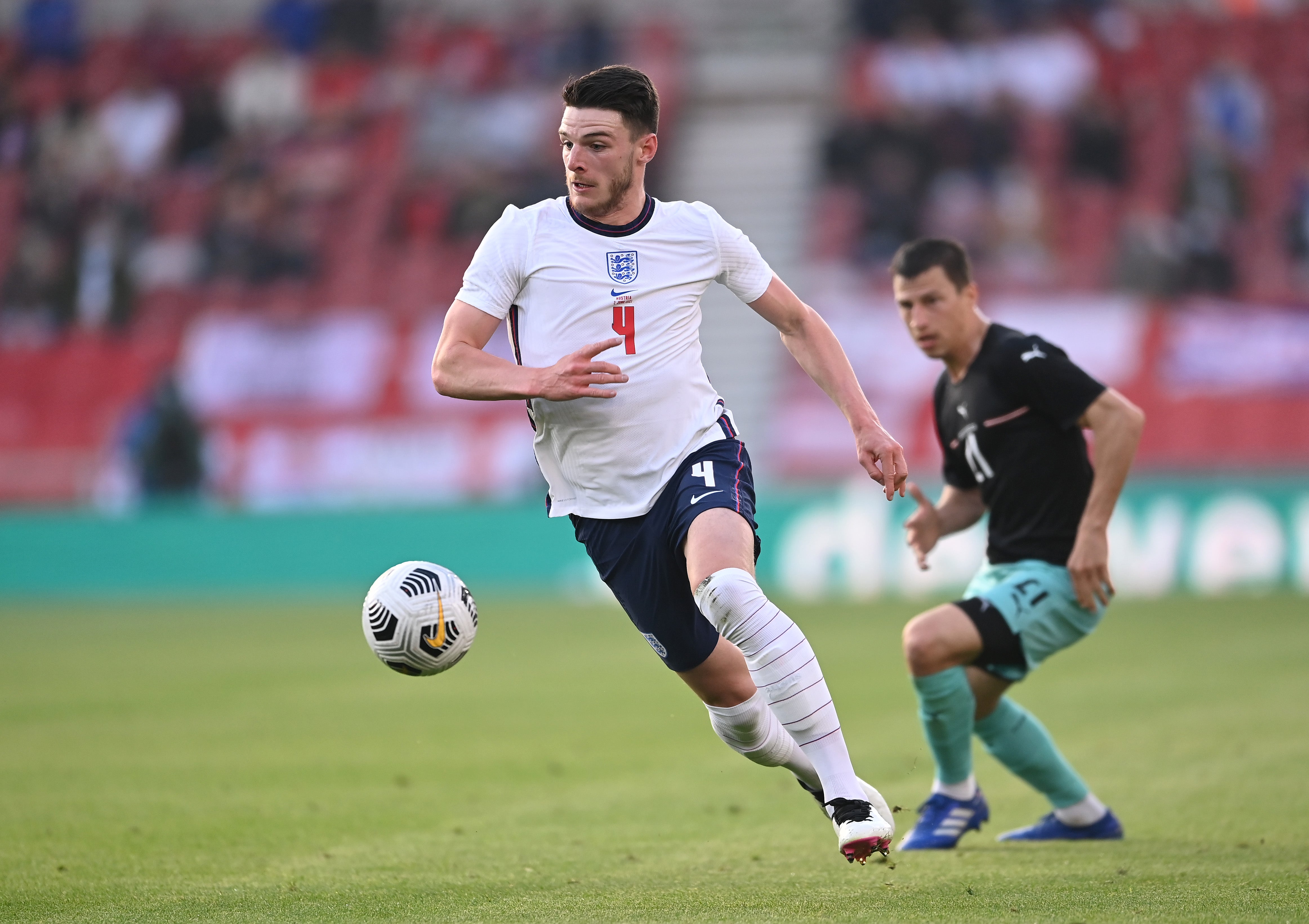 Rice on the ball against Austria last week

Rice certainly appreciates the very privilege of being involved in a major tournament, which – with respect – was a prospect that would have been a lot more difficult for him with the current Ireland.

The midfielder continues to get critical comments across the Irish Sea, for the effusive way in which he spoke about pulling on the green jersey as late as August 2018. That was mere months before he says he made his final decision.

From sitting down with Rice at England’s Euro 2020 camp, though, it is impossible not to think that is just his own expressive manner rather than anything else. He was a mere 19-year-old at the time, but retains a hugely likeable youthful exuberance.

That can be seen when he is asked whether he threw his pints up in the air in 2018, like almost every other England fan.

“Do you know what? Until this day I have never had a beer and I am 22! That is the truth. I just don’t like the smell of it so I have never gone near it.”

While Rice admits he does drink the odd spirit “every now and then”, the root of this is a more mature and serious-minded reason. He wants to acquit himself like an elite athlete.

“As footballers we have never got the time to, it’s game after game. If you want to live that life, I think you may as well do something else. You have to be on it 24/7. Recovery is so important in terms of sleep and what we do after games. So much is put in place and if you go out after a game and have a drink, it is not going to help you the next day when you go into training, so I can save that for the end of my career.”

The same approach has got him fit for Euro 2020, after a moment when it did look like his summer might be under threat. Rice actually ruptured his lateral collateral ligament, in one of England’s last competitive games, the World Cup qualifying win against Poland in March. His recounting of it also gives an insight into his personality.

“It was crazy how it happened. I did it in the 60th minute and played the rest of the game but my knee was feeling unstable. It wasn’t right. It would keep moving. After the game, I mentioned it to the doc and it seemed like nothing. It was strange. When I got home I texted the West Ham doctor and said this isn’t right. I’m a bit of a worrier. He sent me a scan and it came back when I was on my way home. 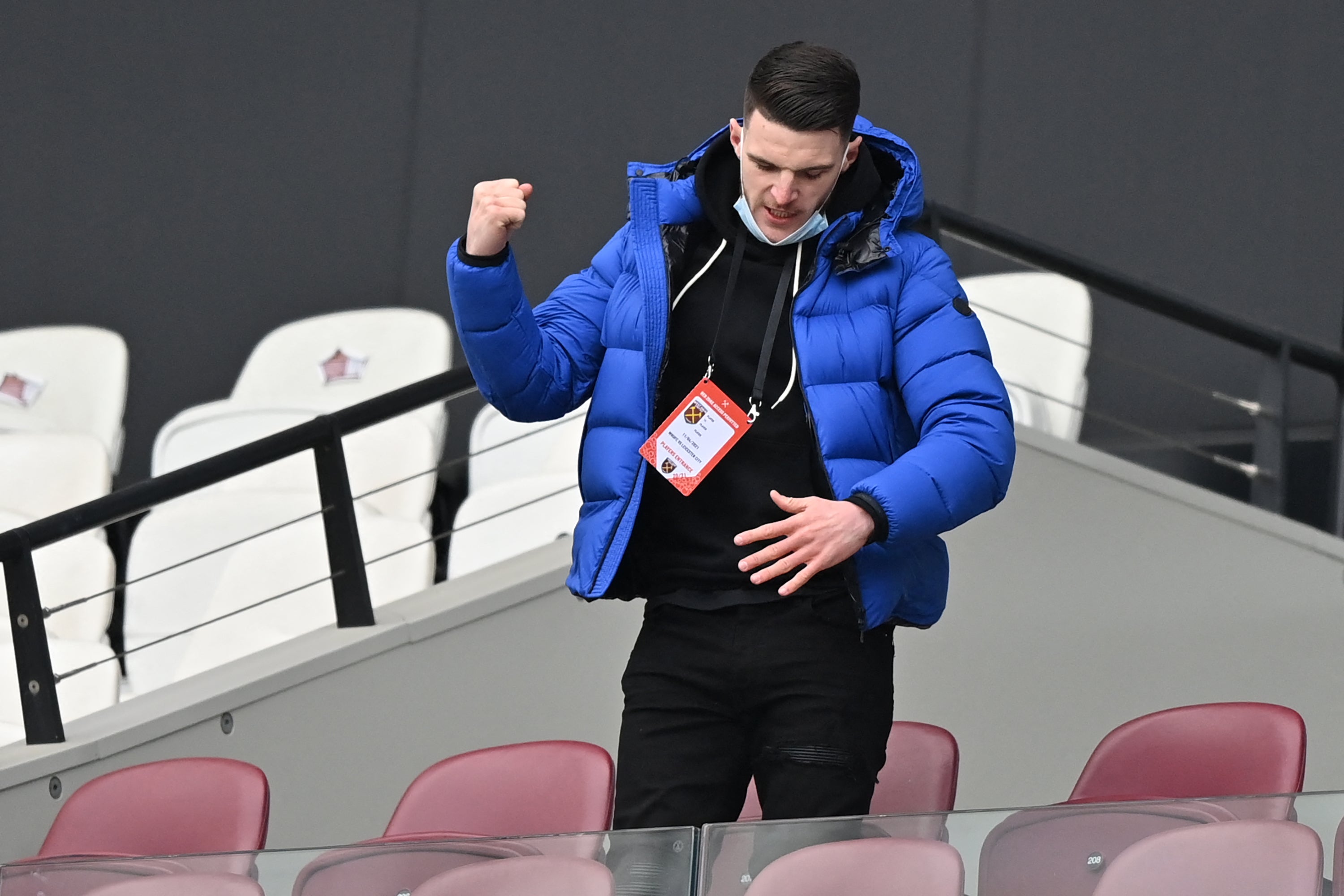 “I got the call saying I ruptured my LCL and straight away I asked: ‘Am I going to miss the Euros? ‘Am I going to miss the end of the season?’ They said they couldn’t put a timeframe on it, and they didn’t know if it needed surgery, but it could be 10-12 weeks. I’m thinking… ‘Oh.’ The first person I called was my dad and then [Mark] Noble. He always gives me good advice and calms me down.

“Once we saw the knee specialist, he gave me full belief I could be back and then as soon as I started my rehab it was six weeks, no days off, and really smashed it out. I was back running in four weeks. It could have been three but I didn’t want to push. Then it was more the fitness side. I played three games in seven days after six weeks at the end of the season, so that was tough, but now my knee feels really good and strong. I’ve done everything right which gives me the best chance to perform.”

There are many in the game who believe Euro 2020 could be the platform for Rice to show he can perform to much higher levels, to really be that big-club tournament player.

“I think there is far more to my game now than just a holding midfielder,” he says. “It’s funny because my coach, Alan Irvine – he’s just left West Ham – he pulled me [aside] two weeks before the end of the season and said I’ve got so many more levels that I can go to, that I just need to start showing it more. And he’s worked with some top, top players. But it kind of clicked in my head that when you are on the pitch, you need to show it. I do what I do. I am a holding midfielder and my job is to protect the defence but in terms of being on the ball, taking it forward – which I have been doing this season – getting on the edge of the box a bit more and not always being so defensive. I feel that I can definitely add so much more to my game going forward.

“I feel as if I’ve got more confident, like with the armband at West Ham. I took it into England here to have no fear, like I am at club level. I’m vocal. I try to help my team-mates out.”

There may even be the possibility of playing with his FaceTime mate, Mount, in the centre.

“Absolutely, you saw that in the last camp. We played in the midfield against Iceland, in Poland. It is definitely something we are familiar with and ready to do.”

Rice is more than ready for his first tournament. He believes it could yet end with a medal of his own.

“We’ve got some great players, we can give it a real go.”