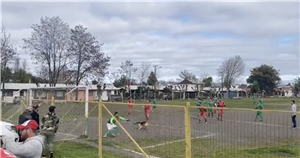 A dog has been filmed scoring a super header in a Chilean football game – but fans all said the same thing about VAR getting involved.

Deportivo San Miguel de Rio Viejo were preparing to take a free kick when they were joined for the set piece by a four-legged friend.

An Alsatian was wondering on the edge of the opponent’s defence, heading towards the six-yard box as the ball was floated in.

It misses all the players – but lands flush on the dog’s head, deflecting away from the goalkeeper’s reach to give San Miguel a goal.

Fans around the ground cheered and laughed at the bizarre event, which was soon shared on Twitter on Sunday.

It has gone viral with more than a million views as users have been left in stitches at the dog’s role in the goal.

“Timed that run to perfection. Got a great future ahead of him,” one viewer said.

But others were more concerned about the officiating of the game, suggesting Premier League technology would have given a different outcome.

Do you think this is the best goal ever scored by an animal? Let us know in the comments section.

A fourth drew a line across the pitch at the time of the kick being taken to show the dog in an offside position.

Accompanying the snap – which even had the English top-flight’s ‘offside’ graphic on it, they wrote: “Yeah he’s drifted behind a bit early there definitely.”

Another joked: “Miles off. Smacks of inexperience. Got a lot of potential with that movement though.”

While a final viewer said: “Bravo, yeah miles offside but the finish was the b******s.”

It is not the first time a dog has intervened this summer as an amateur game had to be stopped after a dog made a goal-line clearance last month.

Scottish side Fergusile’s forward Ross Hamilton latched on to a long pass, played onside by a shaky offside trap, and bared down on goal.

The no.20 looked like he had slotted it past the Leven goalkeeper, only to be denied by a dog who was in the goal mouth having a good ol’ sniff. 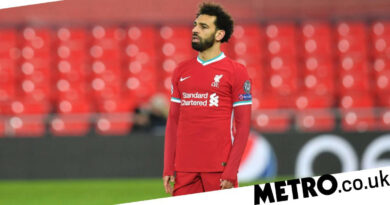 Mohamed Salah fears Liverpool board will sell him this summer