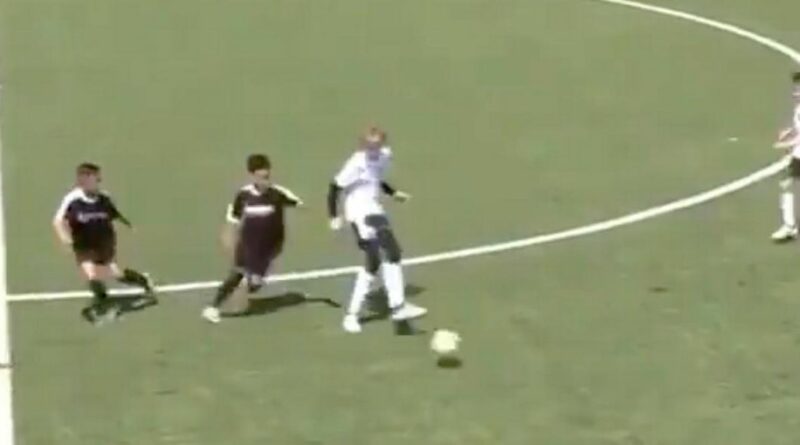 Donald Trump's youngest kid Barron was utilising his abnormal height as a 14-year-old to display some hold-up tactics that Premier League icon Peter Crouch would be proud of.

Footage of the former President's sporting enthusiast son went viral back in 2020 as he took part in an academy fixture – lining up as a striker with an eye for bringing his team-mates into play further up the pitch.

One six-second clip showed the now 6ft 5in 16-year-old, bring down a defender's clearance with his left boot before shrugging off the challenge of a rival and laying the ball off to a nearby winger.

With a second adding: "Top class hold up play in fairness. Wout Weghorst vibes on him."

A third said: "Quite a tidy bit of hold up play there to be fair to him…" With a fourth saying: "Class first touch and hold-up play. Left footed as well. Basically an (Olivier) Giroud regen."

Who is the best tall footballer in history? Tell us in the comments section below

Barron, who was taller than his 6ft 2in businessman father at the age of just 15, was said to be a big fan of the sport he calls soccer, and was once spotted wearing an Arsenal shirt outside the White House.

His father, who left the Oval Office to be replaced by Joe Biden back in 2021, has spoken openly about his youngest child's love for the game.

The former Apprentice boss, who has a net worth of around £2.5billion, even hinted that he would rather his son stays away from American Football to pursue his favourite sport.

Trump said when asked if he would let Barron play American football professionally: "It's very, it's very tough question. It's a very good question.

Adding: "And he actually plays a lot of soccer. He's liking soccer. And a lot of people, including me, thought soccer would probably never make it in this country, but it really is moving forward rapidly."