t was back in the sanctuary of the Estádio da Luz dressing room last August, as Bayern Munich celebrated, that the unflappable Alphonso Davies felt giddy, albeit briefly. “After the Champions League final I was on Instagram Live and I thought maybe I’ll say just ‘Drake, follow me!’ he said of the moment when his thoughts turned to home, and a fellow Canadian in the global consciousness, as Davies firmly is now.

“Then a couple of seconds later someone just tweeted – ‘Alphonso Davies, check your Instagram.’ So he followed me and I went crazy! He sent me a message too, so it was really cool,” Davies smiles, for once looking like an ordinary 20-year-old rather than the player who has cemented his reputation in football’s elite echelon at a characteristically dizzying pace. This air of humility at once explains his stratospheric rise and ability to adapt at speed, and yet makes it more remarkable.

Davies has rarely had the time to reflect in the last 18 months, but he has a strong sense of Canada entering into a golden age of sport – especially with the joint hosting of the World Cup alongside the United States and Mexico awaiting in 2026 – and the world sitting up and taking up notice. “Yes, I feel like it’s a special time for Canadian athletes,” he enthuses. “With the (Toronto) Raptors winning the championship (in 2019, the first Canadian team to win the NBA) the whole country was buzzing and then there was me making it to the final and winning it.”

Did seeing the thousands gathered in the plaza outside the Scotiabank Arena, nicknamed Jurassic Park, with Drake conducting from the stage as they cheered for the Raptors to that title, remind Davies of the atmosphere that propelled him into sport in the first place as a child? “It did. Seeing all those people watching the first Canadian team to win, it was amazing. Just watching it on TV – unfortunately I wasn’t there to experience it myself – the excitement was amazing. Growing up, we had a great fanbase in Canada.”

An incredible amount has changed in Davies’ world since that 2019 watershed. At the point where he was watching a historic moment for Canadian sport from his front room in Munich he had already made his own contribution, becoming the (then) most expensive MLS export of all-time when he joined Bayern from Vancouver Whitecaps for an initial $13.5 million in July 2018. Davies arrived in the November and by the following summer was still very much in his apprenticeship with the path clearly marked – he would eventually take on the daunting task of succeeding Arjen Robben and Franck Ribéry, heading into the twilights of their respective Bayern careers.

Fate stepped in, with injuries hampering a struggling Bayern in what turned out to be the coda of Niko Kovač’s time at the club, in autumn 2019. “It all turned,” he explains, “when David (Alaba) got injured and they needed a left-back, so the coach (Kovač) looked at me and said ‘I know you can play there, and we believe you can play there with your pace and your ability’ so he put me in there. At the time, when I played left-back with Vancouver – and with Canada for a little bit – my main objective was to get forward as much as possible, but here you have to pick and choose your moment to get forward. I had to work out the right time to get forward and the right time to stay back.”

As a promising start turned into a growing sense of permanency Davies had the best on-pitch coach he could ask for when Alaba returned, and the youngster ended up being talked through his new position – in English – by one its outstanding exponents of the previous decade. “When David came back he was playing centre-back, and having one of the best left-backs beside you while you’re playing his position was amazing,” nods Davies. “I’m doing well there and I’m excited to play more games as a left-back.”

A side-effect of pandemic football and empty stadiums is that we have all discovered just how loud Alaba is on the field. “He gives me a lot of information,” Davies smiles, “and he tells me sometimes that with my experience I can lose a bit of focus. He makes sure I’m in the game. Communication’s key and I’m happy he’s constantly talking to me on the pitch.” On the attacking side, bursting from deep and having the chance to add momentum to his fabled pace has worked a treat. “When I see the space I attack it,” he says, “and now I just try to follow through on my actions. The worst as a full-back is when you lose the ball and then have to run all the way back,” he laughs.

The next part of Davies’ development will be without Alaba by his side, and without Hansi Flick, the head coach with whom he’s won seven trophies since last year. The respect is clear. “He trusts his players,” Davies explains, “and he trusts young players as well as his veterans. He makes sure everyone’s up to speed and gives 100%. He’s a people person, and he’s a good guy to be around, he’s fun. He cares about what’s going on in your life. He can have a joke with you and because in training we have fun, it makes you want to give everything.”

Last season, Davies’ relentlessness was Bayern in microcosm. They won 29 of their last 30 matches in all competitions in 19/20 (the other one was a goalless draw with RB Leipzig) to close out the treble, and their manner was as steamroller-like as the numbers would suggest. This term Bayern have had their tough moments, not least the unfortunate Champions League exit to Paris Saint-Germain when the injury list became just too long. How has Flick’s pastoral side helped to prop up the squad against the backdrop of a breathless calendar?

“It’s good,” enthuses Davies. “It lets the players feel free and focus on their game. The humanity and the kindness from the coaches helps the players a lot. Sometimes maybe some players are going through some stuff off the pitch and they come into training and they don’t want to be yelled at. They (the staff) give us that little boost of energy and put a smile on our faces, so we can focus on what’s happening on the pitch.”

The physical side of a jam-packed programme hasn’t be so much of an issue for Davies. “From a personal standpoint, it all started when I was in elementary school,” he says. “I did a lot of running – cross-country, track and field. So running isn’t an issue for me! But yeah, it was a tough transition from winning the Champions League in August and going right back into defending the Bundesliga. I feel like our players take care of our bodies and make sure we’re healthy. It was a quick turnaround and there are a lot of games. So for me it was just about taking a quick break to clear the mind, and get ready for the season to start again.” 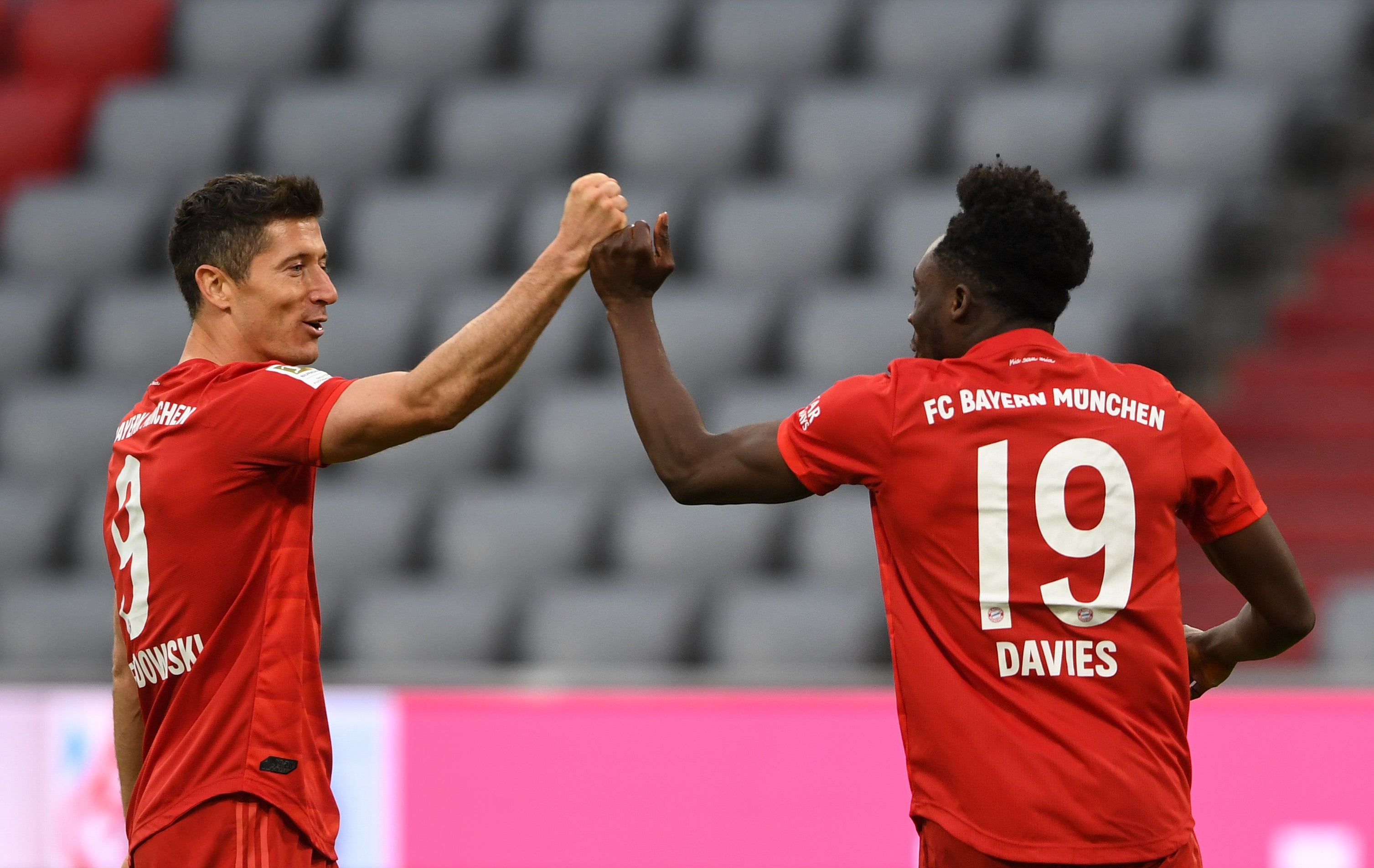 Davies is already enthusiastic for next term too – not just to get back on the Champions League horse, but to see Allianz Arena full again. “When all this happened and we had to play without fans, the first game back was Union Berlin,” he recalls, “and I remember us running on the pitch and not hearing any noise, It was like a training session. We all looked at each other and were like ‘this is really weird’. I think the first time we had fans since was the Club World Cup in Qatar, and you run on the pitch, hear the cheers, and it was amazing. We all talked about it in the locker room. Even on the pitch, when we were passing each other the ball, we were telling each other that we’d missed this. (When the Allianz reopens) everyone’s going to be buzzing. For me it’s going to feel like the first time I ever stepped on the pitch in a stadium with fans.”

Growing in further into this developing Bayern core with Leon Goretzka, Joshua Kimmich, Serge Gnabry and company (“and don’t forget Jamal Musiala”), Davies is already quickly becoming a senior player in one of European football’s behemoths. This player who has never shied from embracing his responsibilities is also now a UN Goodwill ambassador, and is proud to represent his upbringing, having been born in a refugee camp in Ghana to Liberian parents. In fact, he discovered more about it through the UN’s invitation. “I had no idea that they were the same agency that helped my family come to Canada,” he says.

The country’s key part in his development, though, is always front and centre. “When I moved to Edmonton,” Davies says of settling in North America as a child, “that’s when my life began.” A mere fifteen years on, Canada couldn’t ask for a better overseas flagship.

Arsenal must return to Champions League or risk falling even further behind rivals, says Mikel Arteta 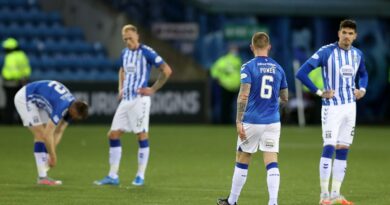