The emotion in Stephen Kenny’s full-time sprint in the direction of the Dundalk supporters was borne from the pain of past experiences.

He admitted afterwards that he couldn’t face the thought of another miserable trip out of the Aviva. The Dundalk manager always speaks passionately about giving his players the opportunity to shine in the arena, but the venue was beginning to become an unhappy hunting ground after back to back final defeats to Cork.

Relief was a theme that ran through the celebrations after Patrick McEleney’s second half header completed the double and delivered Kenny’s eighth trophy during his extraordinary stay in Louth.

The contrast this time is that the bulk of his better players are already under contract and ready to go again next year. Cork pushed Dundalk hard in this game, yet there is less certainty about their direction.

For the victors this winning feeling could become even more of a habit. Their American chairman Mike Treacy went on his own lap of honour after the final whistle, and the backers are prepared to give the manager further funds to invest in the team over the winter. “It’s naive to suggest we are comfortable now and we’re going to do this and that,” cautioned Kenny, “I’ve enough mixed experiences in my life not to think about that.”

At the same time, he believes there is more to come from this group, with the supremo also stressing that he has targeted the recruitment of younger players with a point to prove.

His match winners are in that bracket, although McEleney’s situation is slightly different as Dundalk paid a fee to bring the playmaker home from Oldham after an unhappy stint with the League One side.

“You could look at England and say I failed, but you’re not going to do that in League One or League Two,” said McEleney, discussing the feeling of celebrating in front of a crowd of 30,412 – the biggest since 2010.

McEleney was awarded the man of the match honour and felt the honour was thoroughly undeserved – pointing to Brian Gartland or his fellow Derryman Michael Duffy as viable candidates. Injury doubt Robbie Benson was also excellent.

His manager said that McEleney was influential after half-time, yet acknowledged that Cork had made things hard for the 26-year-old prior to that.

Indeed, John Caulfield’s team had regained their old sparkle from the outset even though they were dealt with a blow beforehand when right-back Steven Beattie was ruled out, leaving Conor McCarthy with the unenviable ask of shackling Duffy.

Caulfield’s big call was to play Karl Sheppard through the middle as a central striker, hoping that his pace could stretch Dundalk’s rearguard.

And that quality was evident in a dramatic minute where a Sean Hoare header put Dundalk ahead before the defender turned villain.

Kieran Sadlier chipped the ball over the top for Sheppard who lived up to his surname by getting his body and the ball in the right position to draw a foul from Hoare.

Sadlier stepped up to dispatch the spot kick and become the first player to score in every round of the competition since Charlie Ferry in 1974.

Cork had created the chance with a decent move straight from the tip-off. Kenny, for his part, was frustrated by the fact that his players were still in celebration mode, noting that some had gone to their families following Hoare’s opener.

“A cardinal sin,” he declared, with a smile which suggested that the happy ending saved some of his squad from an almighty dressing down.

They were rattled in the aftermath. With Gearoid Morrissey and Conor McCormack busy in the engine room, Dundalk tried to force things and the hurried passes annoyed Kenny.

With no visible improvement after the interval, he took corrective action by replacing right winger John Mountney with Jamie McGrath and instructing the newcomer to drift into central areas.

“That occupied other players and got Patrick free,” he said. “We started to put passes together.”

The injury that ended Morrissey’s contribution posed another problem for the green shirts. McGrath played a vital role in the winner, capitalising on a sloppy touch from Shane Griffin before taking his time and picking the pass for the overlapping Sean Gannon, whose superb delivery was steered past Mark McNulty by McEleney.

This was just the second headed goal of his career; the first was in his Derry City days. “It felt like the ball was coming in for days. It was a like a film,” he laughed.

The Dundalk story is the one that keeps on giving. “I came here to win trophies and I was gutted last year with how it went,” said Duffy, who missed the decisive spot kick in their penalty shoot-out defeat.

“We’re looking to do the same next year and the Champions League, which is a big thing for us.”

Both Kenny and McEleney made similar noises; asserting that this is the continuation of a journey rather than the end of one. They will find time to enjoy this, though.

“We’ve won and lost here and when you lose it’s a lonely place,” said Kenny, “I couldn’t face going up the road without that trophy. This one ranks up there with anything.” 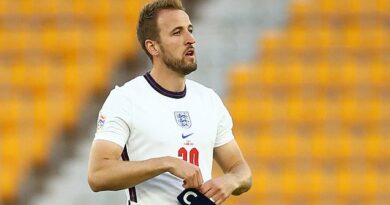 CHRIS SUTTON: Harry Kane can't do it all on his own for England