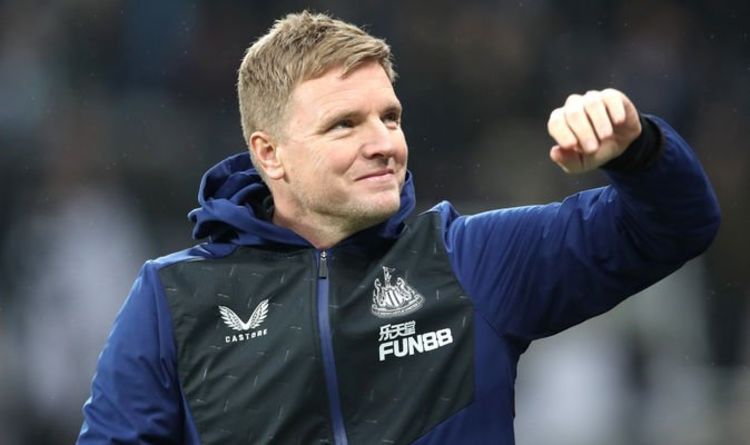 Newcastle manager Eddie Howe could focus on landing a striker as a priority in January, with the 44-year-old apparently on the lookout for four players when the transfer market reopens. Callum Wilson was forced off during his side’s 1-1 draw with Manchester United on Monday night.

The Magpies led for much of the match against the Red Devils but failed to hang on to all three points as Edinson Cavani struck late on for Ralf Rangnick’s team.

Newcastle appointed Howe as their new manager at the start of November following the departure of Steve Bruce.

But the former Bournemouth boss has only managed to lead his team to one Premier League victory in eight games.

That win came at the start of this month as the Magpies defeated Burnley 1-0.

Newcastle have picked up points in draws against Brentford and Norwich, but Howe has failed to turn his side’s season around thus far despite improved performances.

The north east side could be without Wilson for months after he injured his calf against the Red Devils, while star player Allan Saint-Maximin may also be set for a spell on the sidelines after failing to complete the full 90 minutes.

“I feared for him when he went down with nobody around him – a pull. Allan, I don’t think is as serious.

“We are thin on the ground in terms of bodies.”

Newcastle’s two forwards have been responsible for 10 of their 19 Premier League goals this season.

And if Howe is unable to find a replacement for Wilson, Newcastle could find themselves freefalling into the Championship.

But the manager also has other areas of his team he needs to address.

According to the Daily Mirror, Howe is searching for a right-back, a centre-back and a defensive midfielder to bring in alongside a new frontman.

Newcastle became the richest club in the world when they were taken over by a Saudi Arabian-backed consortium in the autumn.

And Howe will be hoping club chiefs put their hands into their pockets in the New year to ensure reinforcements can be brought in.

The Magpies have won just one of their 19 league matches this season and have failed to find any sort of consistency.

They are currently 19th in the table, one point above basement dwellers Norwich.

But Newcastle are crucially just two points behind 17th-placed Watford, who were hammered at home by West Ham on Tuesday afternoon.

And the Toon could move up the table if they can put a run of victories together in the coming months.