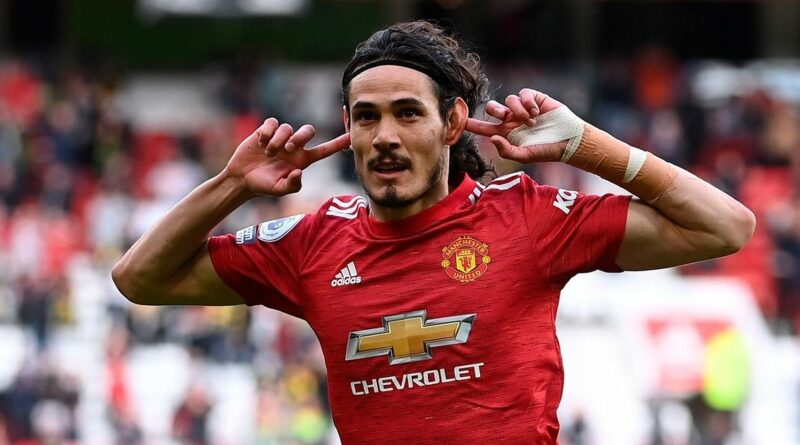 The Uruguay international might have scored the goal of the season after a brilliant chip against Scott Parker's men at Old Trafford.

A long punt down the pitch from David de Gea was questionably helped on its way by Bruno Fernandes.

It sprang Fulham's offside trap, putting Cavani through on goal.

But rather than take a touch to take him closer to the visitors' net, the ex-Paris Saint-Germain star decided to have a go first time after spotting Alphonse Areola off his line.

The result was a sublime chip that sailed over his former Parisien teammate's head and into the goal.

It was quite the welcome present for fans, who were allowed into Old Trafford for the first time this season.

But Fulham came back and in the second-half, Joe Bryan grabbed an equaliser that saw the points shared.

However, after his marvellous goal Cavani has joined an exclusive club at United – along with Teddy Sheringham and Zlatan Ibrahimovic.

That was his 10th of the season, making him the third Red Devils star over the age of 33 to reach that milestone in one year.

The veteran striker also matched the most goals scored by a Uruguayan for United, which was set by fellow countryman Diego Forlan.

The 41-year-old, now the manager of Atenas de San Carlos, had a less than fruitful spell at Old Trafford – scoring 17 in 98 matches.

Cavani has already reached that total in just 39 games – 59 matches less than his compatriot.

However, there was an unwanted record for Ole Gunnar Solskjaer when Bryan's goal took two points off United.

It means 10 points have been lost from winning positions at Old Trafford this season, which is the most they have ever suffered in the Premier League in one year.