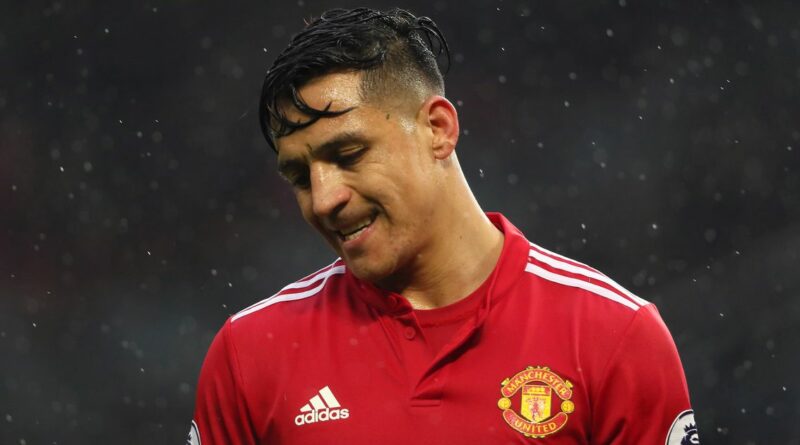 Newcastle fans are dreaming of their new owners splashing the cash on some of the biggest stars in European football following their £300million Saudi Arabian takeover last week.

However, the Toon faithful should be wary that even the world's most talented players are susceptible to monumental falls from grace.

Whether it's through injury, new surroundings or simply an unfortunate decline, not every big name lives up to the hype and goes on to enjoy a long career at the peak of their powers.

We've picked out eight examples of stars who went from world class to major flop very quickly, with a number of famous Premier League faces included.

Manchester United thought they had struck the deal of the century when they swapped the Chilean, widely considered one of the best players in the Premier League after scoring 80 goals in 166 games for Arsenal, for struggling star Henrikh Mkhitaryan.

But for reasons that remain unclear, Sanchez never came close to replicating the electric form that lit up north London in his time at Old Trafford and eventually left with a whimper.

After scoring just five goals in 45 game for the Red Devils, he was offloaded to Inter Milan in 2019 and has produced similar numbers for the Italian club.

Who do you think is the biggest flop in football history? Let us know in the comments section below.

The poster boy of big-money transfer flops, Torres was arguably the most fearsome centre-forward in world football before a controversial £50million move to Chelsea came in January 2011.

After bagging 81 goals in 142 games for Liverpool, the Blues were convinced they had got one over on their Premier League rivals by paying a club-record fee for their star striker.

Unfortunately for them that wasn't the case; as Torres scored just one goal in his first half-season and went on to record a disappointing 45 goals in 172 appearances, failing to justify his price tag.

The Germany ace arrived at Arsenal for £42.5million in 2013 with a lofty reputation after registering 27 goals and 80 assists in 159 appearances for Real Madrid.

Yet while he stayed at the Emirates up until January of this year, Ozil proved to be a luxury player too frequently in the Premier League; going under the radar in matches against the best opposition and struggling to make an impact.

An encouraging run of form would often be followed by a series of poor performances, and his departure in January marked the end of an underwhelming spell in England.

It was hardly a surprise when Real Madrid made Kaka – the World Cup, Champions League, Serie A and Ballon d'Or winning Brazilian maestro – their latest Galactico in the summer of 2009, forking out £60million to prise him away from AC Milan.

Nevertheless, the classy midfielder suffered a disastrous dip of form in Spain and never managed to resurrect it, largely because of injury problems.

After scoring just 29 goals in 120 games for Los Blancos, Kaka returned to Milan for a season and then spent the remainder of his career in Brazil and America.

The Colombian striker was almost unplayable in his days at Atletico Madrid and Monaco, scoring 153 goals in 231 appearances throughout his time with both clubs and emerging as one of the leading centre-forwards on the planet.

But his explosive ascent to world football's summit was halted when he sustained an ACL injury at Monaco in January 2014, keeping him out of action for the next six months.

Perhaps spotting his decline, Monaco loaned Falco out to Manchester United the following September and, bizarrely, after he registered just four goals in 29 appearances for the Red Devils, Premier League rivals Chelsea took him on a similar deal the next season.

Unsurprisingly, he only scored once for the Blues before heading back to Monaco, where he briefly revived his career for a couple of seasons.

One of the finest Premier League players of the past decade, Hazard enjoyed great success in his seven-year stint at Chelsea and is considered a legend at Stamford Bridge.

After inspiring the Blues to two Premier League titles, as many Europa Leagues, the FA Cup and the League Cup, he waved an emotional goodbye when he secured a dream £103million switch to Real Madrid in 2019.

Yet, the Belgian's time in Spain has actually proved more of a nightmare, as a series of injury problems have prevented him from reaching top form for Los Blancos.

Roman Abramovich was desperate to bring the Ukrainian striker, who had scored 173 goals in 296 games for AC Milan and helped the Italian club win the Champions League, to Chelsea in 2006.

The Blues chief paid an English-record £31million for him that summer, but it quickly became apparent that Shevchenko, 30 at the time, was no longer at the peak of his powers.

He only spent two full seasons at Stamford Bridge, scoring a mere 22 goals in 76 games before heading back to Milan on loan in 2008 and then to Dynamo Kyiv permanently a year later.

Manchester City were on cloud nine when, on the same day they were bought out by wealthy new Arab owners, they pipped Chelsea to the £33million signing of Robinho on transfer deadline day in September 2008.

The Brazilian had earned a reputation as a flamboyant Samba star in three years at Real Madrid, where he had claimed two Spanish titles, and his City career got off to a great start when he bagged 15 goals in his first season.

However, Robinho's form plummeted dramatically the following year, failing to rediscover his best form after a three-month spell on the sidelines and returning home to Brazil with Santos in January 2010.

Euro 2020 play-off rules: Is there extra-time or will ties go straight to penalties?