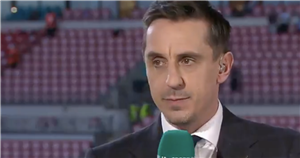 England supporters were left baffled by the technical issues that plagued ITV's coverage of their Euro 2020 semi-final clash against Denmark at Wembley on Wednesday.

The Three Lions went into the clash with a home advantage but were met by an inspired visiting team who who took the lead in the first-half thanks to Mikkel Damsgaard's stunner.

While the game went to extra-time after Simon Kjaer was forced into scoring an own goal by Raheem Sterling, many watching at home were still annoyed by some losses in audio.

While Emma Hayes could be heard loud and clear when she was talked to during the match, Gary Neville could only be heard in short bursts, leading Sam Matterface to apologise.

One fan wrote: "#ITVFail with Gary Neville there. Sodding ITV."

With a second joking: "Shout out to itv for muting Gary Neville, much better without him."

With a fourth writing: "England games should only be on the BBC! ITV can't even sort out Gary Neville's mic!!!"

Is BBC coverage better than ITV? Give us your thoughts in the comments

Focusing back on the action, Chris Waddle urged England to find the net in any way possible during the extra period to book a final against Italy at Wembley.

He told BBC Sport: "Sometimes you go to a tournament and you have a lot of energy and the belief and confidence goes high and all of a sudden you hit a brick wall and tonight Denmark have hit a brick wall.

"But England don't put the ball in the box enough they don't shoot enough it's all playing in front of people. Do it a bit earlier, they're looking for the perfect goal.

"Don't do that, get it in there and you might get something, an own goal anything!"

With Micah Richards adding: "England have got the whole crowd behind them. England have done particularly well but it's just that final bit, that composure.

"We saw that first goal when Kane dropped into that little hole and played the ball quick. It's almost too slow getting there and to be fair to them, the reason Denmark are so tired is they've had to defend so many crosses, they've had to sit deeper than they would like.

"But I would like to see England introduce some more subs. Mount's doing a great team effort in terms of work rate, but in terms of creating something I want to see a little bit more."