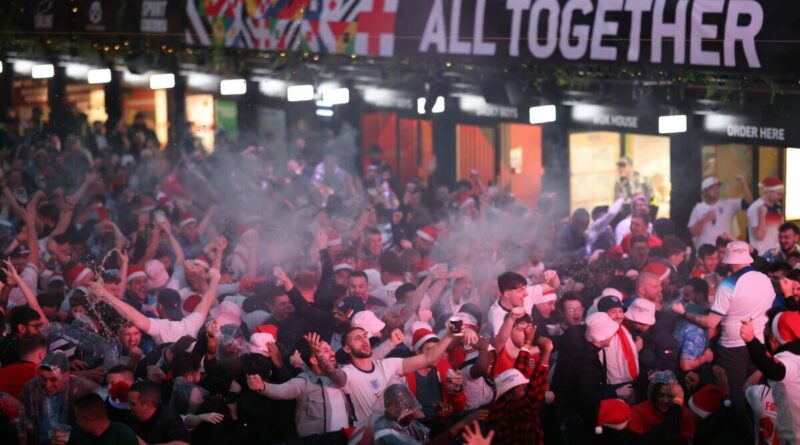 England fans have raged after many supporters were seen continuing to throw pints of beer in the air at fan zones across the country in a new trend as the Three Lions demolished Senegal in the last 16 of the World Cup. The act has become commonplace over the past few years, particuarly since the 2018 World Cup and the recent rise of the Three Lions to global football prominence. But now many fans are getting annoyed with the gesture.

Gareth Southgate’s side were in inspired form in Qatar and set-up a showdown with France in the quarter-finals after humbling Senegal 3-0. Senegal were by no means easy prey for England and frustrated their opponents for large spells of their encounter at the Al Bayt Stadium. But the 1966 World Cup winners eventually broke the deadlock with seven minutes of the first half remaining as Jordan Henderson swept home after being teed-up by Jude Bellingham.

Harry Kane thumped in a second goal in stoppage time at the end of the first half after latching onto Phil Foden’s pass, before Bukayo Saka turned in Foden’s cross to put the game to bed just before the hour mark.

Celebrations were rife across England as fans made the most of the winter World Cup at fan parks. But plenty of people took exception as a new trend of chucking pints in the air broke out after the goals went in.

“England have some serious talent but by f*** they have the worst fans in the world,” wrote @abdulbigtool on Twitter. “What is it with buying a pint then wasting it by throwing it all over your mates. Maybe I’m just tight.” Supporter @MatthewHartnes1 sardonically penned: “Ah great, England have scored. Now where’s that spare pint I bought, I must throw it in the air.”

And @OG14__ added: “No idea why it gets on my t*** so much but wish people would stop paying so much for a pint and then just launching it for the sake of it when England score.”

Meanwhile @stick2yourpuns summed up the experience by recycling an old Mastercard advertising slogan as he wrote: “Buying an England jersey – £70. The pint of p*** lager – £9. The rage of being soaked – priceless.” And @10Jamesg said: “Will never understand going to watch an England game and paying way over the odds for a pint to launch it in the air after a goal. Such a waste of beer.”

England will now take on France on Saturday night for a place in the last four. France reached the quarter-finals after seeing off Poland 3-1 on Sunday afternoon. Olivier Giroud opened the scoring for Les Bleus just before the interval, with Kylian Mbappe adding a brace in the second half. Robert Lewandowski grabbed a late consolation for Poland from the penalty spot. But it was France’s day as they took one step closer to retaining the trophy they won in Russia four years ago. 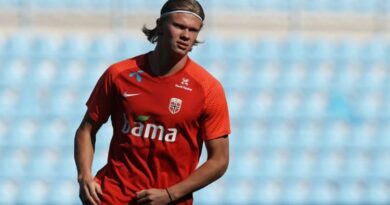