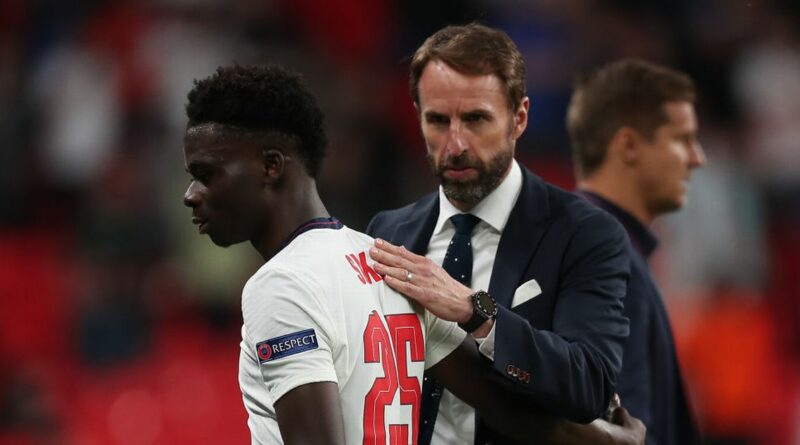 A reported leak has revealed Bukayo Saka will miss out on England’s Euro 2020 final clash against Italy tonight.

Gareth Southgate is set to play a 5-2-3 formation as the Three Lions take on Italy at Wembley Stadium in what will be the nation’s most important game since 1966.

The reported decision comes as a shock following Saka’s fantastic performance in the semi-final against Denmark, where his low cross forced an equalising own goal.

But the Arsenal teenager being dropped would mean he will be the only player from semi-final starting line-up to miss out as Kieran Trippier returns to the side in his place.

The back-five will be made up of Kyle Walker, Harry Maguire, John Stones in the middle while Trippier and Luke Shaw provide width.

This will be a return to the formation which saw England overcome rivals Germany in the last-16, with Southgate opting for greater emphasis on defending once more against the Italians.

Meanwhile, Euros hero Raheem Sterling, Harry Kane and Mason Mount will be the forward trio hoping to break down a tight Italy defence.

Do you think it's a mistake to drop Saka after the winger's impact was so crucial against Denmark? Let us know in the comments section.

The reported leak came hours before Southgate appeared in a video where he spoke directly to the England fans.

He said: “Thank you to everybody for the incredible support we’ve received throughout this tournament

“We hope that we’ve represented you in the right way. We hope that you have enjoyed watching us play.

“I am very grateful to all the players and the incredible staff I’ve got with me that we’ve got to our first final for 55-years.

“We know now we’ve got to deliver for you so we’ll be doing everything we can.”