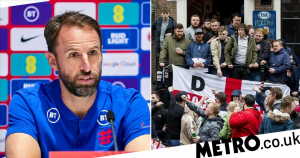 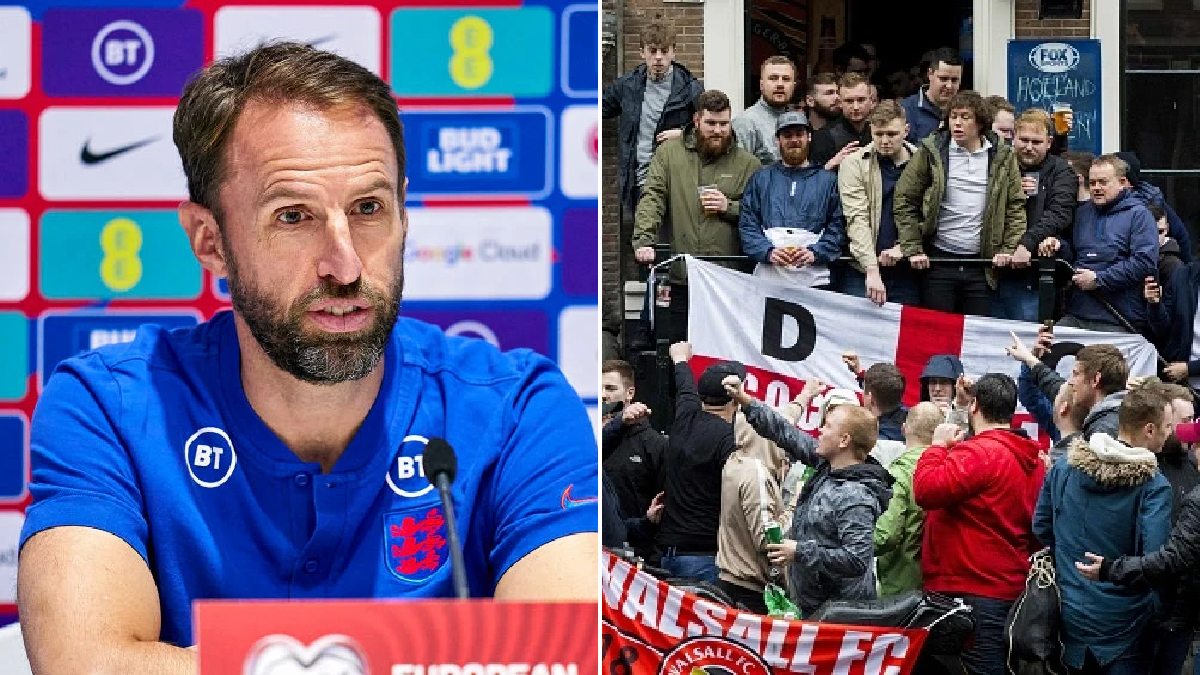 Gareth Southgate has urged England fans not to ’embarrass’ the nation as the Three Lions prepare to face Germany in Munich and insists crowd trouble has an ‘impact’ on the players.

Almost 3,500 England fans have tickets for Tuesday’s Nations League fixture against Germany at the Allianz Arena, with more expected to travel without tickets.

England supporters faced backlash after chanting World War Two songs the last time they played in Germany and tomorrow’s match falls just a day after the anniversary of D-Day.

Meanwhile, in 2018 more than 100 arrests were made during England’s trip to Amsterdam to play the Netherlands.

The FA are aware of the possibility of crowd trouble in Germany and are sending extra stewards and specialist spotters to identify trouble makers.

Southgate was asked about the behaviour of England fans ahead of his team’s trip to Germany and said: ‘I think we know because of the landscape at the moment, that the spotlight is going to be on.

‘So we all want to be coming away talking about a brilliant night, good football and a stunning atmosphere. We can only ask that’s what our supporters deliver.

‘[Crowd trouble] definitely has an impact [on the players]. Staff are working on things detracting from the main part of their job, you are embarrassed when you hear about it, because you know it’s a representation of your country.

‘I think we can only give the correct messages, it’s then you’ve got to rely on people behaving themselves.

‘We have supporters from all parts of the country who travel brilliantly, and leave foreign countries with a great feeling about England and English supporters.

‘We also know that there’s always been others that do it a different way, and that’s been the same for 40-odd years.’

England were ordered to play one match behind closed doors as punishment for the unrest at Wembley during the Euro 2020 final.

UEFA also imposed a suspended ban for a second game which will be activated if there is a repeat of crowd trouble in the next two years.

More than 1,100 fans are currently on banning orders while 880 supporters had to surrender their passports for the duration of the Germany trip.

Southgate’s side will be aiming to bounce back from Saturday’s shock defeat to Hungary when they face Hansi Flick’s Germany.