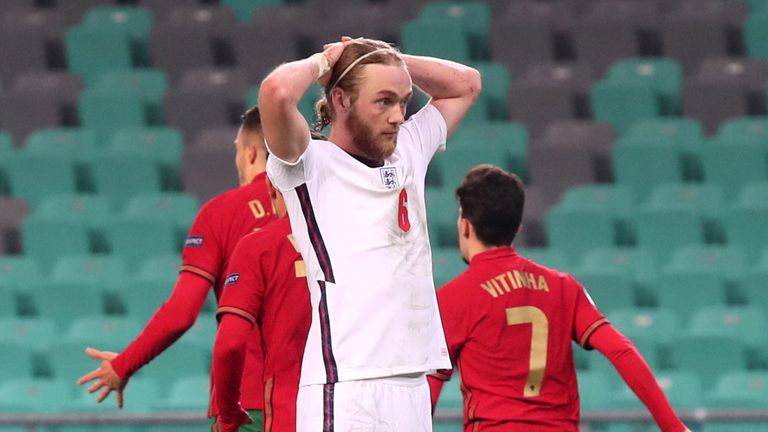 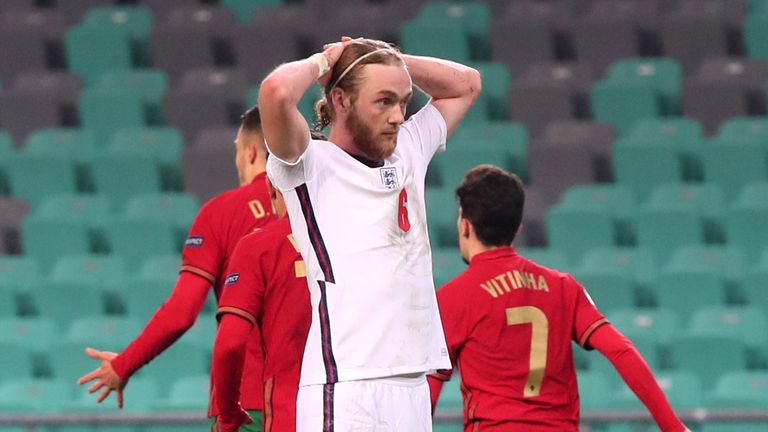 England U21s face Croatia on Wednesday staring down the barrel of a fifth group-stage Euros exit from six tournaments unless results go their way.

Aidy Boothroyd knows what his side must do, beat Croatia by two clear goals, if they are to stand any hope of qualifying for the knockout stages later this year.

But even that will not guarantee England’s progress. Only that result coupled with a third win from three for Portugal over Switzerland would send the Young Lions through.

Boothroyd’s team face elimination in the group stages for the second tournament in a row under his management. But unlike at Euro 2019 in Italy, where England were let down by dropping points from winning positions, here they haven’t come close to having a lead to lose, registering only one shot on target – from a free-kick – in their two games so far.

The Young Lions scored 34 goals in qualifying for Euro 2021, dropping only two points en route to the finals where the mental demands of tournament football have, again, taken their toll.

England are the only team to have qualified for all of the last seven Euro U21 Championships but barring the perfect set of results on Wednesday, will depart at the group stages for the fifth time out of their last six competitions.

Can Boothroyd and his players do enough to turn things around, and why does it always fall apart on the big stage? Find out live on Sky Sports Premier League on Wednesday from 4.30pm; Kick-off at 5pm.

What England need to do

For the second European U21 Championships in a row, England face Croatia in their final group game. Unlike in 2019, when back-to-back defeats had already crushed their dreams prematurely, there is still hope for the Young Lions this time around.

How can England still qualify?

On that night in Italy, Boothroyd’s side took the lead three times before being pegged back on each occasion by a Croatia side who had scored only one goal in their other two group matches.

Then, Boothroyd said his team needed to become more “streetwise” to succeed in tournament football, something they will need in abundance on Wednesday to stand any chance of qualification.

Former Young Lion Andros Townsend, speaking after England’s dismal 2-0 defeat to Portugal on Sunday, told Sky Sports the U21 boss should take the shackles off from kick-off.

He said: “Going forward it wasn’t great against Portugal. The good thing is England know the shackles are off. They have to go for it, they have to put all their attacking players on the pitch from the start.”

Sky Sports Andy Hinchcliffe has covered both of England’s games so far, and wrote in his column ahead of tomorrow’s match: “I’ve seen the two Croatia games.

“They have a bit of everything – some style and tenacity. I think they are a team you can score against but the worry for England is they might hurt you.

“I think Croatia are the poorest of the three teams they’re going to play but with what they’ve got at stake, they’ll run through brick walls to get a result against England.

“At least they’re in with a chance.”

Why have England underperformed again?

In 2017, England U21s reached the semi-finals of the European U21 Championships, the same year the U17 side lifted the World Cup, and 12 months before Gareth Southgate’s senior side finished fourth at Russia 2018.

Those world championship-winning youngsters are now at an age where they would be eligible for the U21s, but instead of being strengthened, Boothroyd’s side have not won a single game at a tournament finals in those four years since.

“It’s a really good question,” he told Sky Sports when asked why the U21s have continued to qualify with ease before stumbling in tournament football. “I can’t be blamed for the other ones, but having experienced getting to the semi-final, and then not out of the group last time and this situation, all with different teams, it’s a difficult one. It’s something we need to review.

“We have got some good players, there’s no doubt about it, but other countries have too. We’ve had a lot of success, this is a difficult time, but it’s not a time to mope.”

As Boothroyd alluded to, the U21s’ cold feet goes back a lot further than his leadership. Three years before Southgate led England’s main side to the World Cup semi-finals, he himself suffered the familiar humiliation of a group-stage exit with the Young Lions, finishing bottom of their group in the Czech Republic.

In 2013, Stuart Pearce’s team, including nine players who would go onto win senior caps, lost all three games – including an embarrassing defeat to hosts Israel – as they too exited with a whimper.

“This dates back a long way before Aidy,” said Townsend, who had been named in Pearce’s squad in 2013 until injury ruled him out of the tournament. “We went into the tournament winning every qualifier, we had the likes of Jordan Henderson, Danny Rose, Wilfried Zaha to name a few, and you go into the finals thinking it’s going to be a walk in the park.

“Then you get there, and you think, ‘oh wow, they’ve got decent players too’. Maybe it’s a mentality thing with our players, playing in the best league in the world, we think it’s going to be easier than it actually is.

“Because you win every qualifying game, you think you’re the best team in Europe, then you get to the finals and see an Arsenal striker, a Crystal Palace winger, players from Spurs, Everton; you’ve got Premier League players in every position.”

England U21 manager: The impossible job?

They have had just one shot on target – none from open play – in their opening defeats to Switzerland and Portugal in Group D.

Jude Bellingham, Mason Mount, Jadon Sancho, Phil Foden and Trent Alexander-Arnold were all eligible to be included in the squad in Slovenia but Boothroyd insisted the senior team remains the priority.

“I know the senior men’s job has been called the impossible job but the Under-21s is the utterly impossible job. The reason is the number of players who have to be produced for the senior team and we are expected to win.

“There’s a reason why we haven’t won this tournament for 37 years and why we haven’t progressed as much as we thought we would, because our primary aim is to get players through to Gareth.

“Could you imagine a reserve-team manager knocking on the door of a senior manager at a club and saying, ‘listen boss, I think today you should let me have the best player to win the reserve championship’. That just wouldn’t happen.

“My job isn’t to say to Gareth we should have Jude, Phil or Mason, it is about the senior team and it always will be. They are facts but they are what the job is.”

Process over results is a philosophy championed by the FA at youth level in recent years. In 2018, they issued guidance to stop publishing league tables and results to local newspapers, to avoid a win-at-all-costs culture breeding.

Certainly, England U21s’ results do not appear to have had a negative bearing on young players progressing into Southgate’s senior team.

Of the major sides who played in the 2019 European Championships, only Germany have seen more players head through to the senior side. Since that tournament, senior boss Joachim Low has overseen a significant refresh of his country’s playing staff on the back of below-par World Cup and Nations League performances.

In addition, the number of English players playing Premier League football was at an eight-year high in 2019/20, making up almost three per cent more of the total proportion of players in the English top flight compared to the season before.

At the Young Lions’ age group, that trend has also continued – 73 English players aged 22 and under played in the Premier League last season, more than any campaign across the last 10 years.

Harry Kane, John Stones and Jesse Lingard, three of the starters in England’s run to the World Cup semi-finals in 2018, certainly bore no tournament scars from their group-stage Euro U21 exit under Southgate three years earlier, either.

On the face of it whatever happens on Wednesday, England’s next generation should still be able to carve their own destiny. But barring a major upturn in fortune, the U21s’ 39-year wait for a tournament triumph looks likely to go extend into a fourth decade.

Sevilla's Kounde: Move to Man City would have been a good opportunity