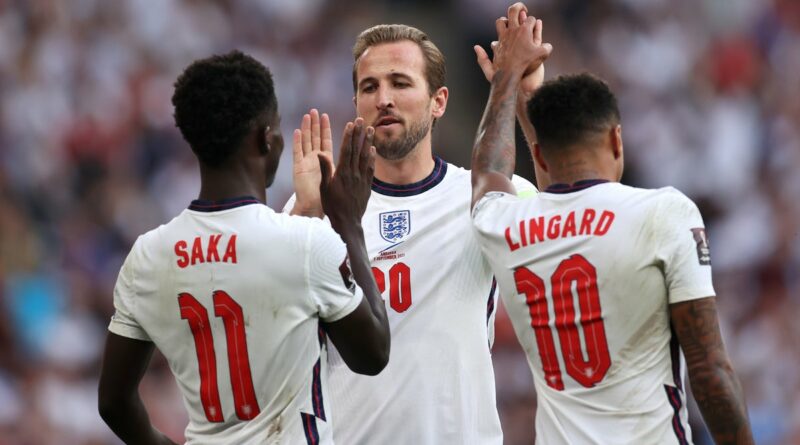 Harry Kane, Bukayo Saka and Jesse Lingard were all on target in the win

England swept aside Andorra at Wembley to win their fifth game in a row in World Cup qualifying, as Jesse Lingard scored twice in a one-sided 4-0 victory.

Bukayo Saka had England’s first sight of goal but saw his effort from six yards deflected off the line but the breakthrough came moments later as Lingard turned a shot into the net with a left-footed volley.

Lingard thought he had doubled England’s lead with a delightful chip but saw the goal ruled out for offside as the hosts took a 1-0 lead into half time. Reece James smacked the crossbar with a long-range effort shortly after the restart but England struggled to create any further chances in what threatened to be a flat occasion at Wembley.

Harry Kane, Mason Mount and Jack Grealish were brought on in an attempt to secure the win, with the latter two combining as Mount was brought down in the box in the 70th minute. Kane scored from the spot to further improve his international record, before Lingard added his second from outside of the box and then set up Saka’s header for England’s fourth late on.

Here are five things we learned.

Naturally, it was a move which saw Alexander-Arnold pick up possession in more advanced and central areas, but it was only a slight adjustment from what we have seen him do at club level so far this season. He has increasingly taken to drifting inside for Liverpool this campaign, such as when he assisted Sadio Mane in the Premier League win over Burnley, which he is able to do through Liverpool’s system. 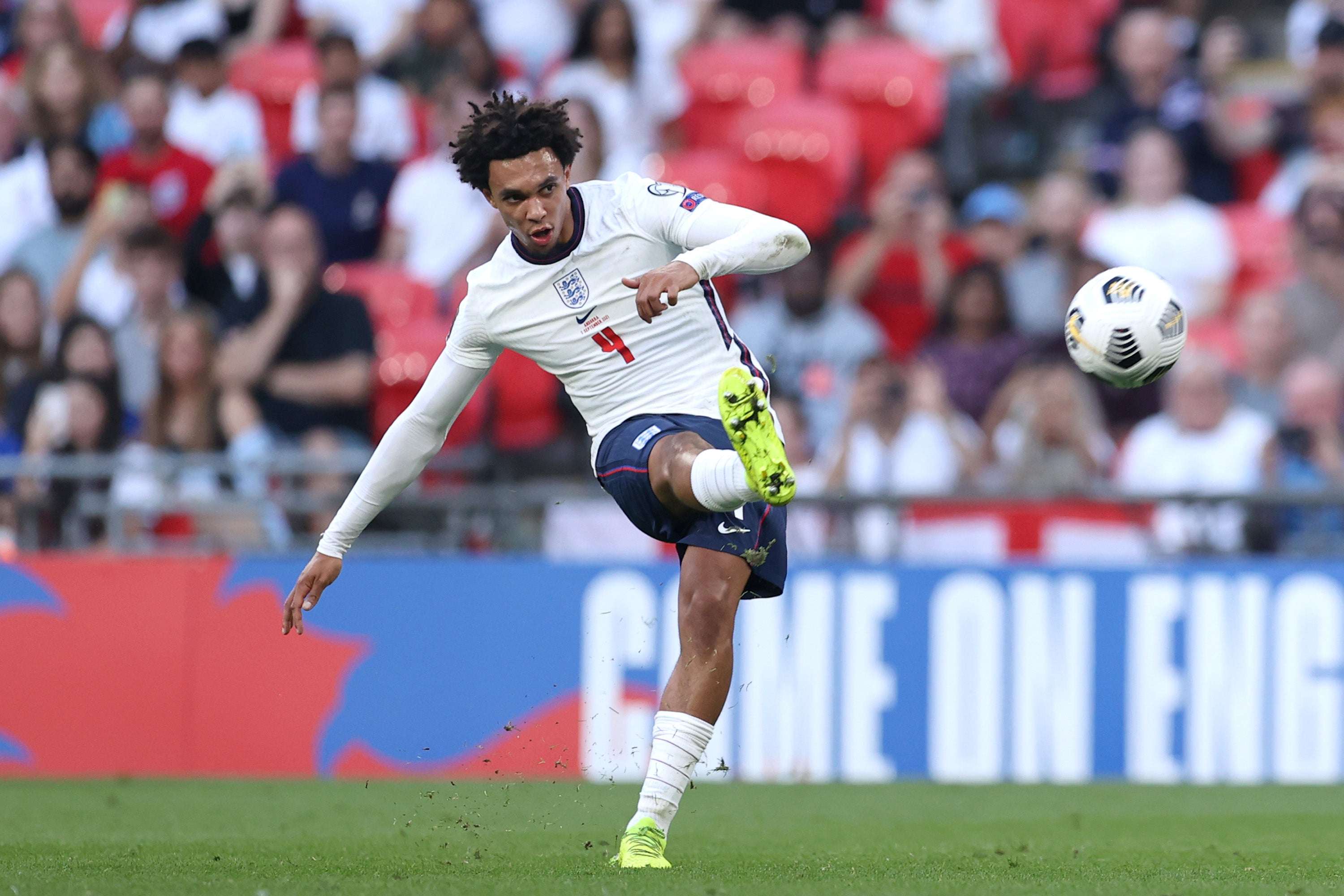 That, it seems, was just what England wanted to replicate in the first half, as well as into the second, although their shape at that point was much more fluid. Did it work? Honestly, it’s quite hard to say. It succeeded, certainly, in getting Alexander-Arnold into the same positions he has thrived in so far this season, which is what Southgate would have hoped to produce. However, as he has proved for Liverpool, Alexander-Arnold doesn’t necessarily have to start in midfield in order to do that.

Had Alexander-Arnold started at right-back, England could have an extra player out wide on the right as the 22-year-old tucked in. This is perhaps what Southgate wanted to achieve with the positioning of Bukayo Saka in the second half.

In any case, whether Alexander-Arnold played well in midfield or not is secondary to the fact that he didn’t play well overall. As he said himself before this match, his performances for England have often been “mediocre” at times, and unfortunately this was another example. Whether in midfield or at right back, Alexander-Arnold’s displays largely come down to how effective his delivery and technique is. Against Andorra, it simply wasn’t up to his high standards, and Southgate’s challenge of getting the best out of the Liverpool man remains unsolved. 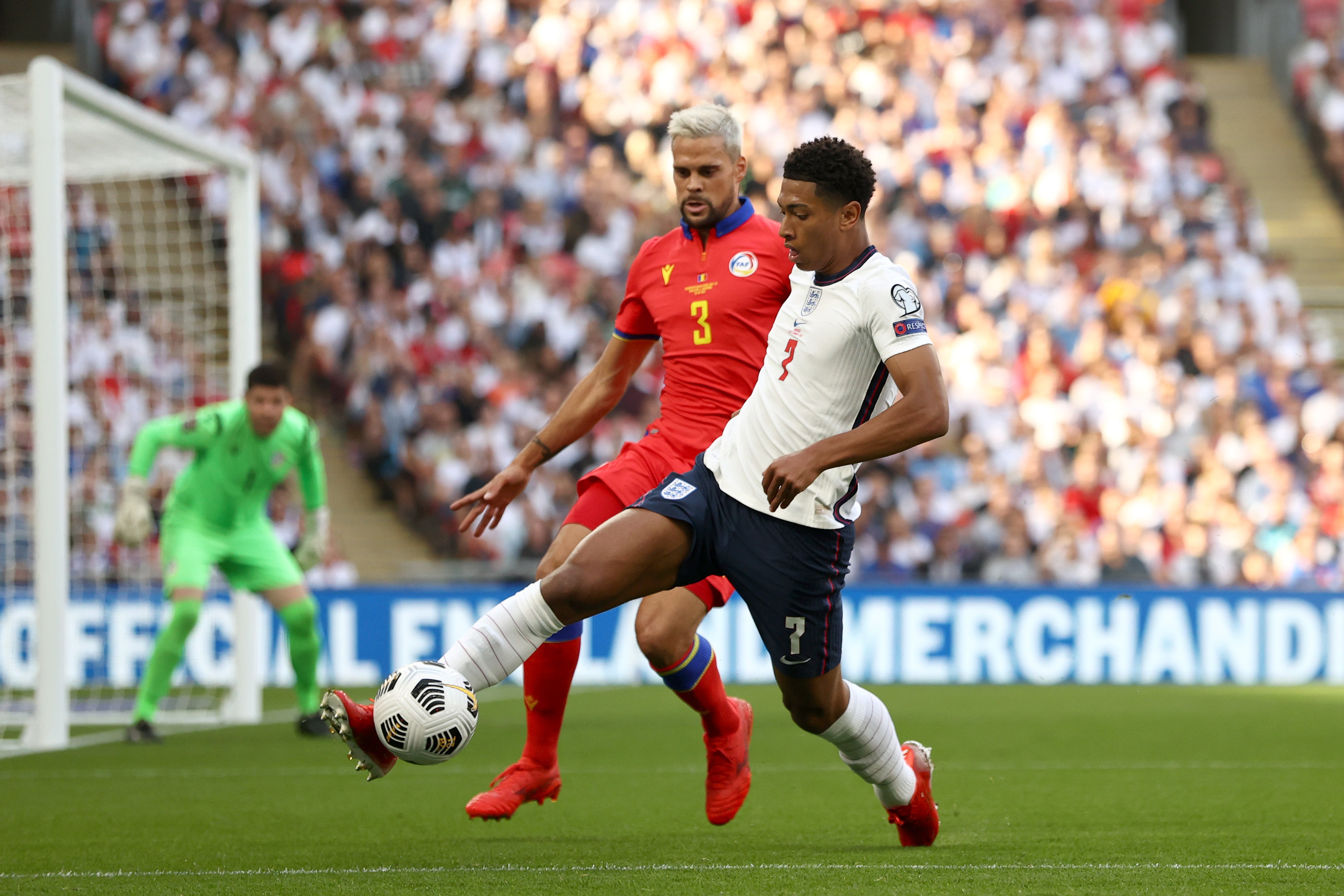 Jude Bellingham was a class above in England’s midfield

Even when you take the opposition into account, it was still quite remarkable to see how at ease 18-year-old Jude Bellingham was on his first competitive start for this country. The midfielder oozed class with almost every touch and was comfortably England’s best performer for the 60 minutes that he was on the pitch, as he displayed a full array of drag-backs, scoop turns and nutmegs – including a smart turn in the build-up to Lingard’s opener.

On top of that was his passing, tackling and third-man runs from midfield, all of which was to a high standard. None of this, of course, is a surprise given Bellingham’s consistently impressive performances for Borussia Dortmund. England’s latest talent has been an open secret for months but given how fresh Bellingham remains, you still come away from watching him perform feeling as if you have picked up something new about his ability.

The majority at Wembley would have walked away from Sunday’s match having had their admiration for Bellingham grow just that little bit more. It can only be a matter of time until the midfielder is starting tougher tests for his country, even if Declan Rice and Kalvin Phillips have done nothing wrong in England’s midfield.

One of the few occasions England fans saw Patrick Bamford on his debut for the national team was when the TV cameras cut to the striker on the bench following Harry Kane’s penalty.

The Leeds United man had a smile on his face as the cameras showed his reaction, but on the inside must have been frustrated that Kane had been presented with such a clear opportunity so soon after he had replaced him, after he had spent so much of his first appearance for the national team left isolated.

Bamford would also have felt aggrieved that his Wembley bow had only last 62 minutes – but with England lacking the goals their dominance of possession had warranted, Southgate felt the need to bring on some of his first-choice options against the side ranked 156 in the world.

The 28-year-old is not the type of player to be too involved in build-up play anyway, and it would have been against his remit to go chasing the ball and demanding possession, but Bamford barely had a touch during the time that he was on the pitch. A snatched volley on his favourite left foot was his best chance – but the connection was off and the effort sailed over the bar.

Perhaps the moment which sparked Southgate’s attacking changes was low ball across the face of goal from Bellingham, which no England player was there to tap in. That could have been Bamford’s best opportunity – and the Leeds man will hope his impressive domestic form continues to ensure that he does not go down as a one-cap wonder.

Lingard shows glimpses of form – but will opportunities follow?

There are few sights more pleasing in football than a confident, in-form Jesse Lingard. The midfielder opened the scoring at Wembley with one of his first touches in the contest but the quality of the finish and the smile which followed told you that the 28-year-old was in the mood.

Moments later Lingard was sent through on goal and delivered a sublime, high-arcing chip to beat the Andorra goalkeeper for the second time. It was a delightful finish – unfortunately ruled out for offside – but only the sort a player who is feeling on top of their game would even try and execute.

It is perhaps surprising, therefore, that this was Lingard’s first competitive start of the season, with the point further emphasised by his second goal late on. The Manchester United player was in sparkling form over the second half of last season while on loan at West Ham, which forced a recall to the England fold, but has yet to make his first start for Ole Gunnar Solskjaer’s side.

He remains in the United manager’s plans, even if he has only played five minutes of the Premier League season so far. Still, now that the transfer window has closed and he remains at Old Trafford, Lingard deserves his opportunity to play a more central role. His performance at Wembley shows that Lingard has retained his confidence from last season’s impressive run, it’s now just up to Solskjaer to allow him to display that on a more regular basis.

Expect another round of wholesale changes for Poland Southgate is likely to revert back to his Hungary side

After Gareth Southgate made 11 changes to his side for Sunday’s match against Andorra, it would not be a surprise to see the England manager make another full raft of alterations and revert back to the side which defeated Hungary so impressively in Budapest ahead of the visit to Poland.

That may well have been Southgate’s plan anyway, and while there were some impressive performances against Andorra, the manner of England’s display at the Puskas Arena means that particular side have more than deserved to retain their places – on what should be another testing away trip for the Three Lions.

Certainly, England will need the same levels of discipline and resolve to negotiate what could be another challenging atmosphere and the starting 11 which featured in Thursday’s 4-0 win also now have the added confidence of getting through that match in such a convincing manner.

Could there be a change in midfield, with either Bellingham or Jordan Henderson coming in? Potentially, but Southgate is much more likely to switch back to last week’s side and go again.