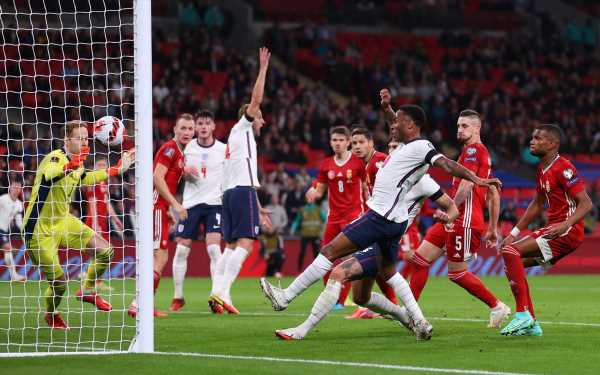 It says much about England’s tepid display that the most assertive moment was Gareth Southgate rightly taking off a struggling Harry Kane, but it still didn’t solve anything. They still limped to a poor 1-1 draw at home to Hungary, who will face more crowd questions after flashpoints between police and supporters, as well as an allegation of racial abuse towards a steward.

In terms of the football, this draw won’t exactly damage England’s inevitable procession to qualification for the World Cup.

It might say a lot about whether they can go and win the World Cup, as Southgate’s side still don’t look capable of reaching the attacking level of sides like France, Spain and Italy despite having an array of attacking talent that is up there with the best in the world. Most were on show here, as Southgate went for his most proactive ever team, with only Declan Rice holding.

It ended up only proving that, for this kind of talent, you need a more sophisticated attacking system. They were ultimately dependent on a set-piece goal from John Stones, to level Hungary’s early penalty.

Southgate himself might similarly point to how open they were at the back.

England were a lot looser than normal, and not just in selection. Luke Shaw’s foul was just reckless and sloppy. It was a definite penalty. Why was his leg that high with Loic Nego that close to him?

On reviewing the VAR, the referee had no option but to give a penalty.

Jordan Pickford was left with little option when it was taken. Roland Sallai hammered it into the corner of the net. It was a superb kick.

It was at that point already a lackadaisical display from England. Their most attacking possible midfield had produced a tepid display, with only Jack Grealish offering any impetus or anything different.

As occasionally happens with the Manchester City playmaker, though, his individual impact felt divorced from the general team display. England were lacking in coherence and any kind of integration.

It was thereby up to Grealish to try and weave his way into the box for England’ most dangerous moment from open play in the first half, side-stepping a defender to bring a save from Peter Gulasci.

It was also why it was both surprising and logical that Southgate took Grealish off.

He had been England’s best player, but that didn’t exactly make for the best team.

The same could be said of Kane. He just didn’t look himself, and hasn’t for some time.

Southgate had little option but to take him off, bringing on Tammy Abraham.

England had equalised by then, but it was similarly instructive that the goal came from a set-piece rather than any kind of move.

Phil Foden whipped in a typically good free-kick. It clipped off Declan Rice, the deflection allowing John Stones an even easier opportunity to convert.

Later on, Sterling had to force an opportunity through will rather than any kind of craft.

One obvious point from this is it proves Southgate was right not to go more attacking through Euro 2020 against Italy in the final.

That doesn’t necessarily stack up, though. There is a fair question over whether Southgate, despite all his many qualities, is capable of getting the team to the attacking level that Italy and Spain have shown.

It will remain the recurring debate until he actually wins a trophy.

As regards winning this match, there was more toil about England rather than any kind of creativity. Most of their best chances remained from set-pieces. Sterling was put through once but the ball was too close to Gulasci.

The forward was another to go off.

Southgate had to restructure outright as Jordan Henderson was brought on so England could go to wing-backs.

England were still looking for the piece of play that would win it.

They ended this grand attacking experiment with a 3-4-3 and Ollie Watkins toiling up front, but no solution, or release.

They are one step closer to Qatar, of course. It just looks a lot less sure than recently. It will only foster more debate about the level this team can actually reach, and what is required to get there.

Southgate has questions there.

There will be bigger questions for the authorities as a flare was smuggled in and there were flashpoints in the stands.

By the end, that’s where Kane, Sterling and Grealish were watching. None of it made that much of a difference. 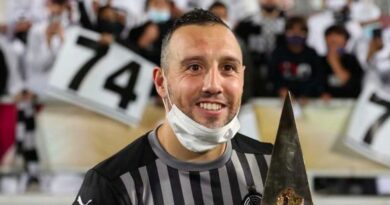