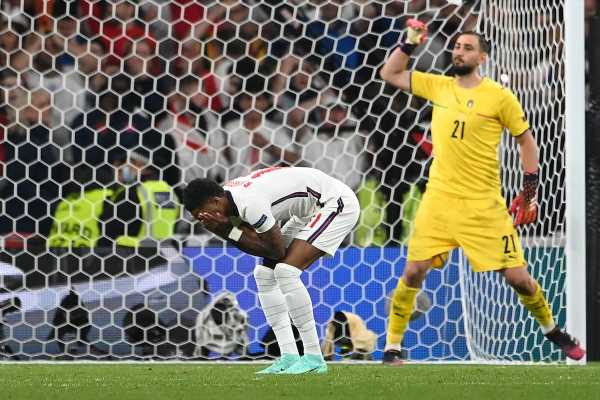 England suffered yet more penalty heartache as Italy won the European Championship in a shootout at Wembley, as the Three Lions’ 55-year wait for a first major honour goes on.

Bukayo Saka missed the decisive kick after Italy’s Jorginho had the chance to win it, while Marcus Rashford and Jadon Sancho also failed to convert from the spot.

Luke Shaw’s early goal in the second minute looked to have given England a dream start in their first final since 1966 when the left-back converted Kieran Trippier’s cross at the back post for his first international goal.

It was the Italians who had most of the ball throughout the match, however, and the Azzurri’s pressure finally told in the 67th minute when Leonardo Bonucci bundled home a loose ball from a corner.

England improved in extra-time but neither side could find the breakthrough, and it was Italy who prevailed in a nerve-shredding shootout. 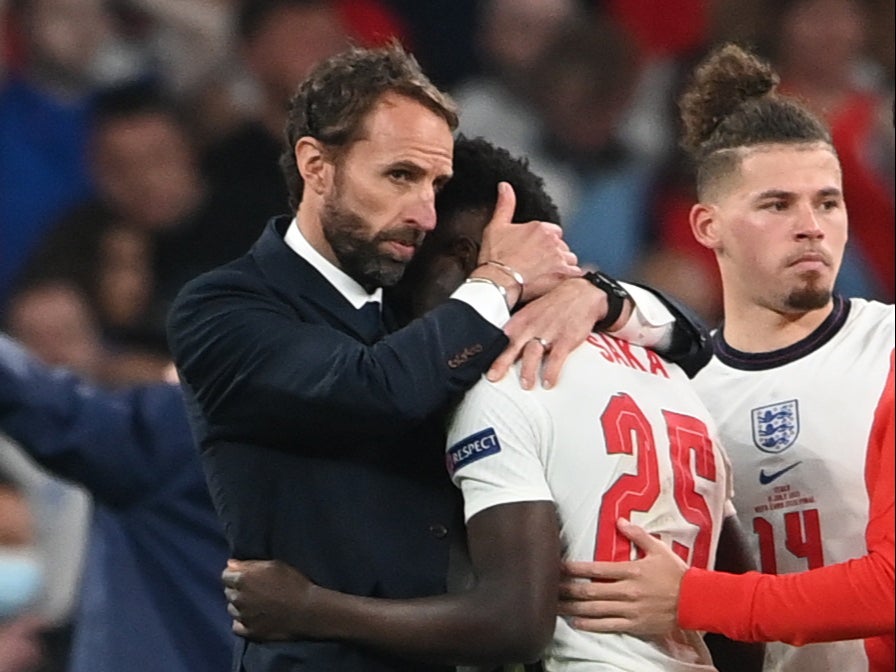 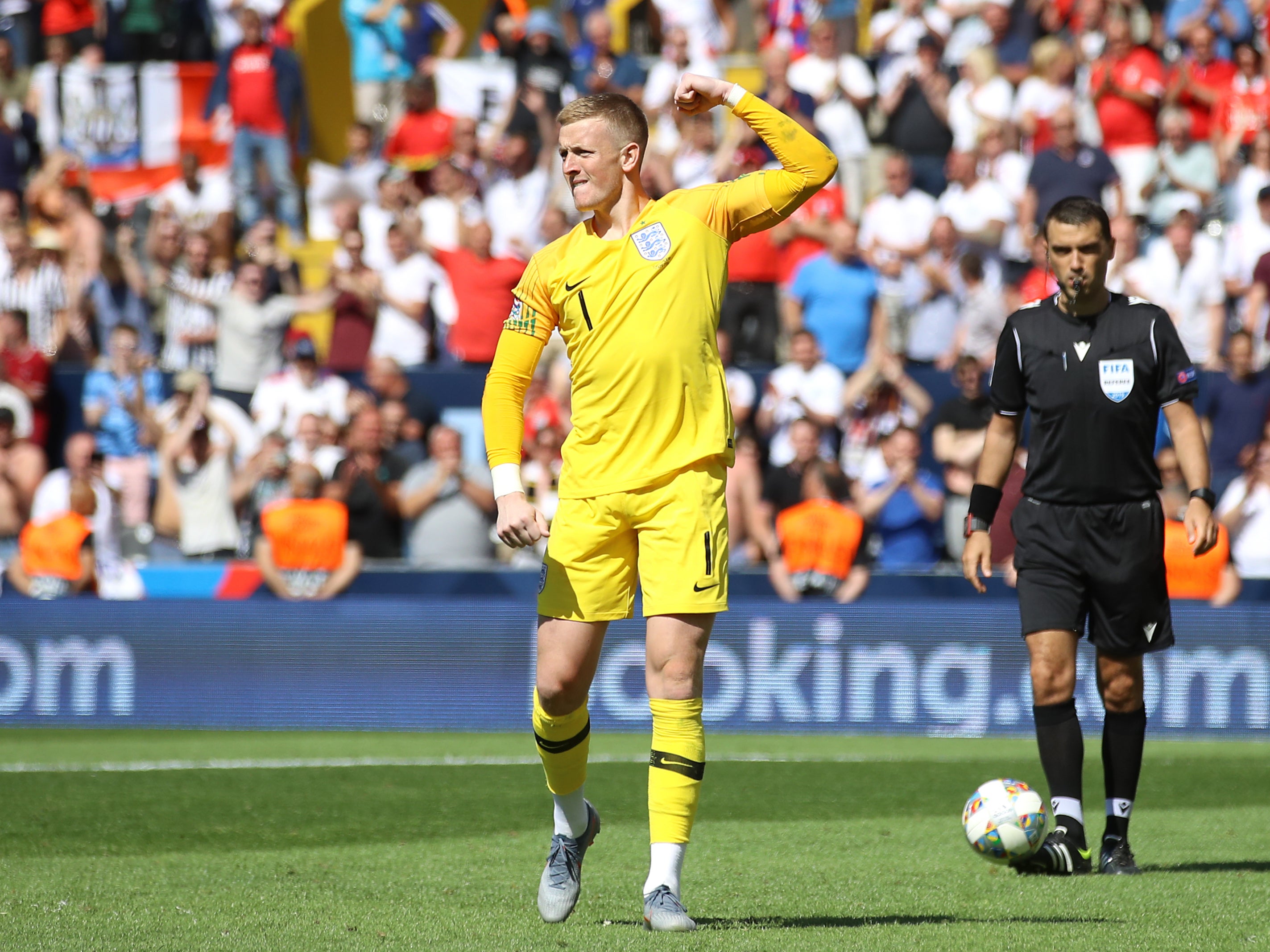 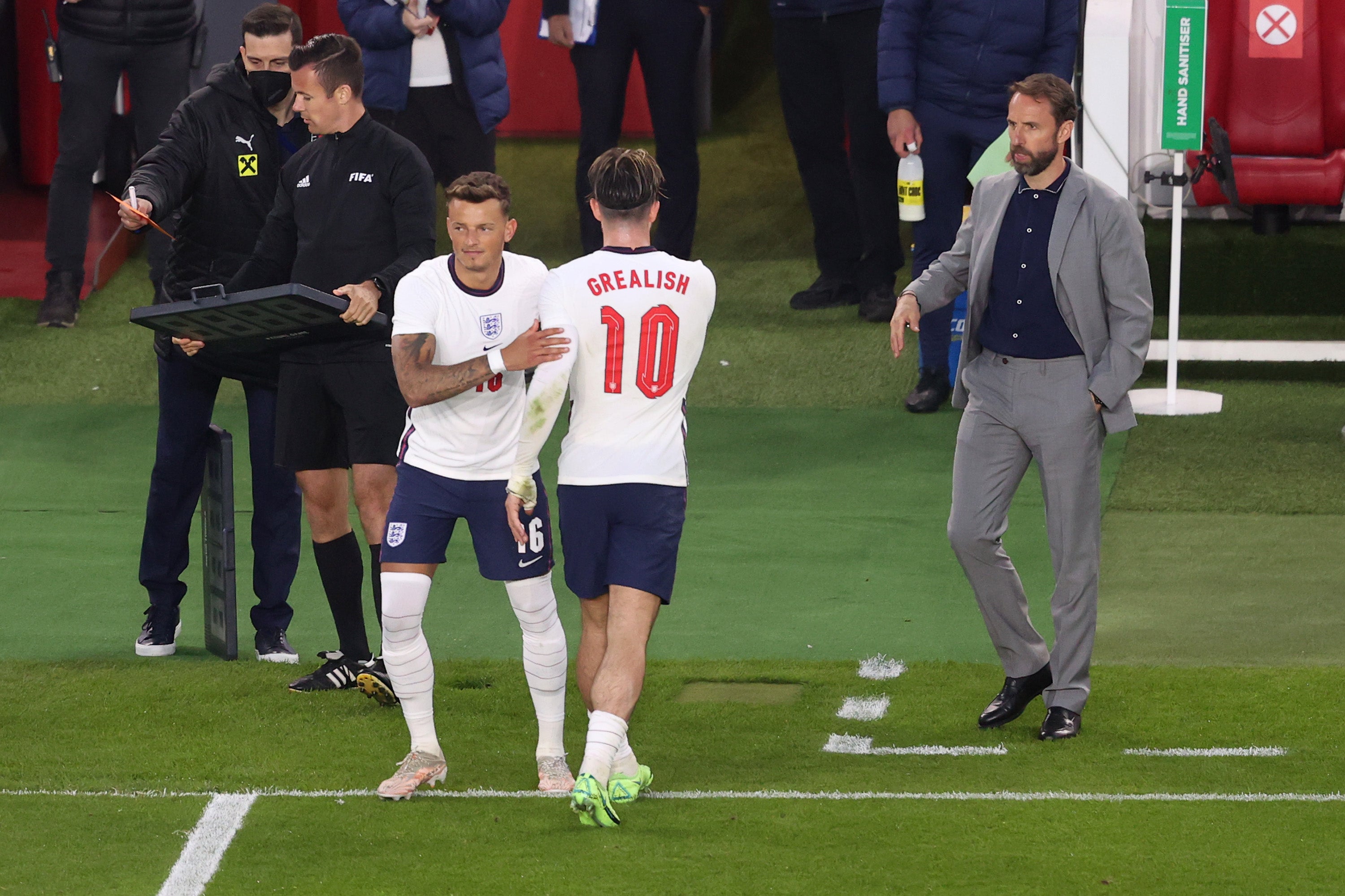 Here are five things we learned…

England pay the price for dropping too deep

Italy had not fallen behind in a match in 17 games, including throughout their run to the final of Euro 2020, so the shock of Shaw’s opening goal within the opening 120 seconds must have reverberated around Roberto Mancini’s side.

The Azzurri went on to dominate the rest of the opening half but rarely looked like scoring. It was true that England dropped much deeper than perhaps they would have liked to so early in the final, but without space to attack Italy looked rather toothless. Their efforts were perhaps best summed up by Bonucci taking on an ambitious shot from range that sailed harmlessly wide shortly before half-time.

In the second half, however, England did not look so comfortable. Everything changed when Italy regained the tempo of the passing and England did not have as many moments on the ball in order to relieve themselves of the building pressure. Eventually, there was a sense of inevitability about Italy’s goal when it arrived in the 67th minute.

Had England dropped too deep, too early? Certainly, when Italy equalised, the momentum of the match had long swung in their direction and England found it challenging to regather control. Memories of the World Cup semi-final defeat to Croatia inevitably came to mind, and it was a similar ending for Gareth Southgate’s side despite another memorable tournament run.

For 55 minutes or so, Kalvin Phillips and Declan Rice excelled in England’s midfield. But with Italy posing more and more problems and England dropping deeper and deeper, Southgate’s side struggled to control possession.

Rice and Phillips were brilliant as they battled, harried and then robbed the Italian midfield of possession on the edge of the box on several occasions throughout the first half, and had their share of joy on the ball too. Rice showed a quick mind and nimble feet to break forward at times, while Phillips was England’s presser and made life difficult for Marco Verratti and Jorginho.

When the level increased in the second half, however, and Verratti was joined by Chiesa and Insigne in flooding the middle of the pitch, England needed that extra touch of composure on the ball to settle things down. Rice came off for Jordan Henderson but by that point, Verratti and Italy’s midfield seemed to be in full flight and England found it difficult to win the ball back. Henderson was less influential as Rice had been and did not adjust to the pace of the contest. 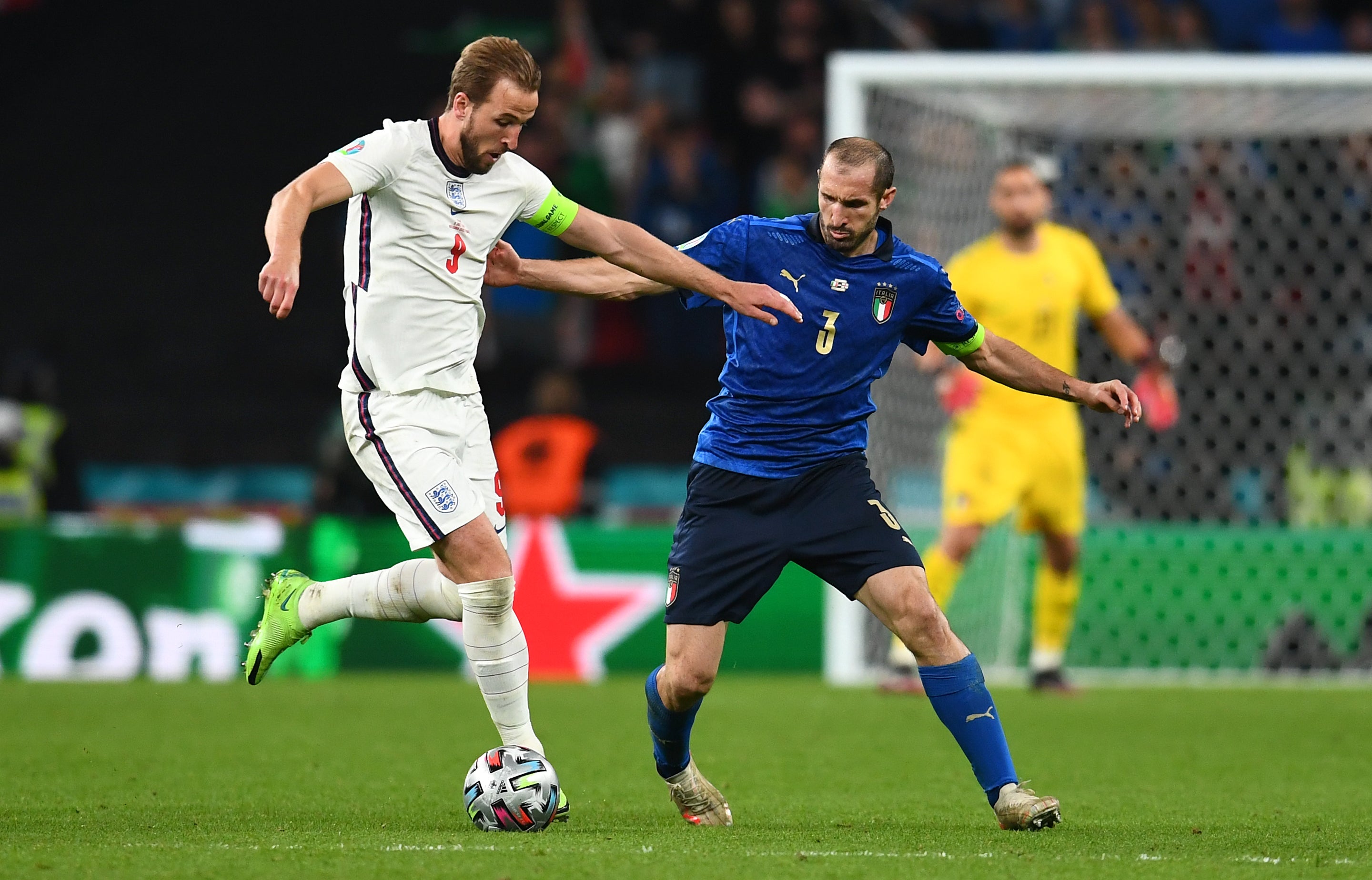 Harry Kane did not get the better of Giorgio Chiellini

Harry Kane’s performances at these Euros have got better and better with each game and for the opening 10 minutes of the final it looked like the England captain had saved his best for last. But as England dropped deep and Italy seized control, the striker saw his influence diminish after what was such an encouraging start.

The blueprint seemed to be set. After his success in dropping deep and exploiting the space in front of Denmark’s back three in the semi-finals, as well as the effectiveness of Dani Olmo and Spain’s false nine system against Italy’s in the semi-finals, Kane looked like he would thrive in reprising his hybrid number 9/10 role.

In the opening five minutes, Kane frequently dropped to space before sending it out wide, with his direct, driving pass out to Trippier in the second minute of the match crucial to England’s goal. It was a move that could have given England so much joy, as Chiellini and Bonucci looked to be struggling with Kane’s movement and Italy seemed to be overloaded in wide areas, but without the striker’s link-up play England could not exploit those spaces.

It was all the more puzzling that England could not get forward as their 3-4-3 system, which worked so effectively for Shaw’s opening goal, seemed to give Italy problems. 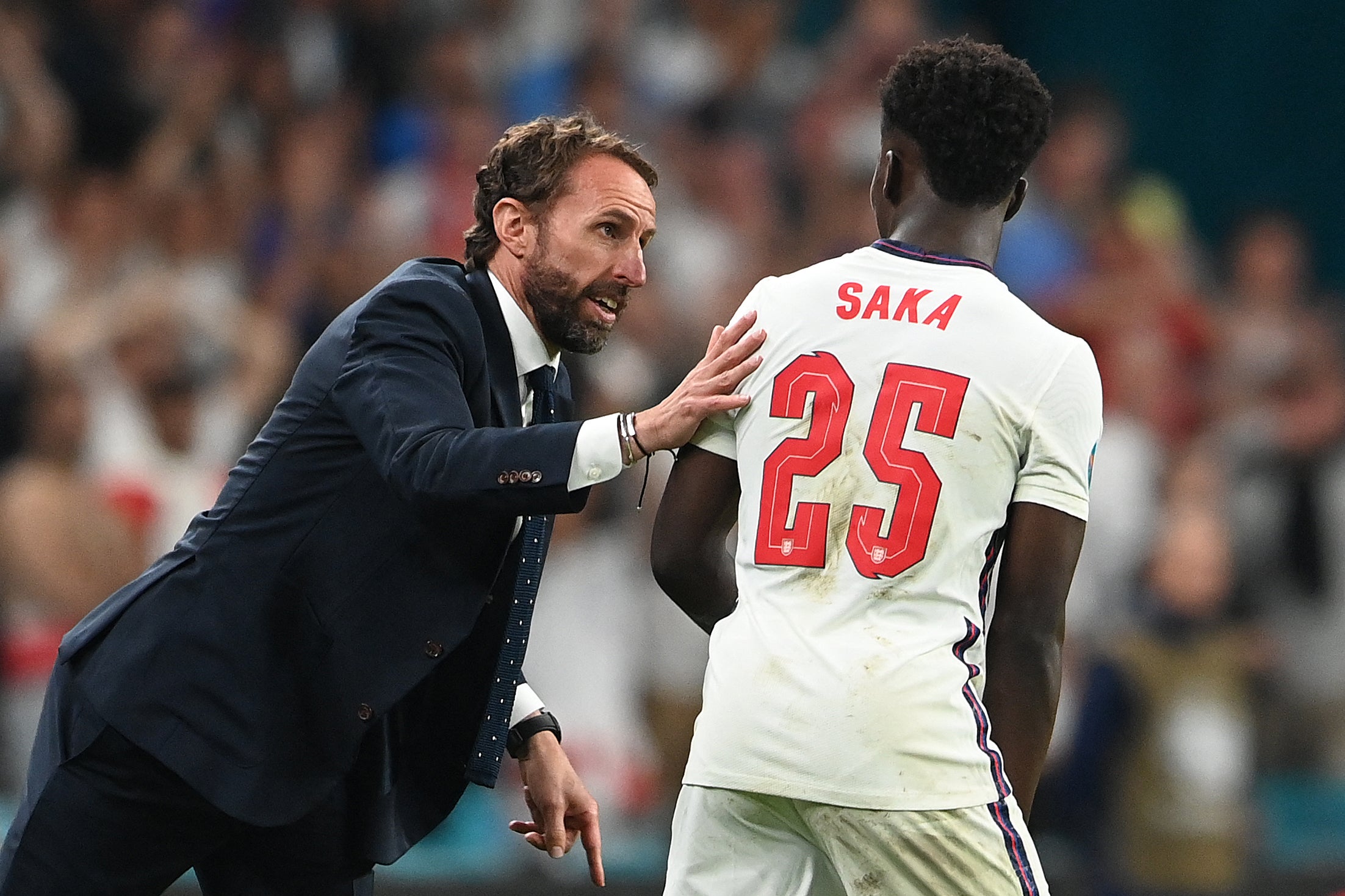 It took until deep in extra time for England to get back on the front foot against Italy, and much of their attacking verve was supplied by substitutes in Bukayo Saka and Jack Grealish.

Saka made an impact on England’s right and offered some much-needed drive that had been lacking for the better part of the previous hour. He was the only England player who looked like he could go past his man, as could be seen when he burst past Chiellini before being hauled to the turf.

Grealish was next up for Southgate as far as attacking changes are concerned, but it took until extra time for the substitution to be made. The midfielder had a couple of moments on the ball in promising areas and was key to England regaining some confidence as they began to threaten in the second half of extra time.

Grealish came on for Mason Mount, who did not have his best game, while the difference the changes made suggested that they came too late. Raheem Sterling was perhaps England’s player of the tournament up until the final but based on his performance throughout the 120 minutes, Southgate could have made a change there as well and allowed either Marcus Rashford or Jadon Sancho more of an opportunity to influence the match during regular play.

In the end, neither play had a touch until the shootout and missed their kicks in agonising circumstances.

Drama of the final lives up to outstanding tournament

It may have been delayed by a year, but when Euro 2020 finally arrived it certainly did not disappoint. Prior to tonight’s final, the drama, tension and quality of the knockout stages has elevated these Euros to one of the greatest major international tournaments of all time, and perhaps the best of the 21st century.

We saw shocks, upsets, thrilling clashes between tournament contenders, and perhaps the most dramatic day of tournament football ever, as Spain beat Croatia and Switzerland knocked out France. Above all was the emotion of Denmark’s run to the semi-finals, following Christian Eriksen’s collapse in their opening game of the tournament, and the reminder of the importance of football as well as the fact that it is only just a game.

This was also the tournament which saw the return of fans, colour and noise to stadiums after months of games behind closed doors. That football had been played for so long under those conditions due to the pandemic only added to the fervour as Wembley’s capacity increased for the semi-finals and final, and England finally made the ground their home as they embarked on a memorable tournament. 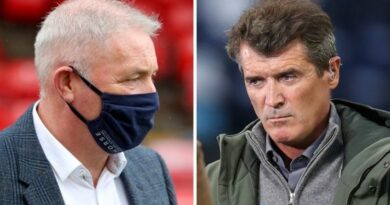 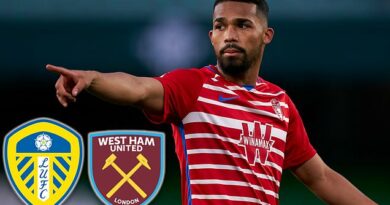 Manchester City 'will listen to offers for Yangel Herrera'