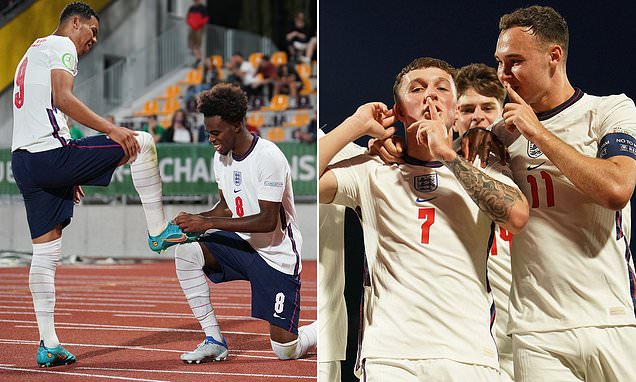 The Borussia Dortmund star dubbed ‘the next Jadon Sancho’, two Aston Villa midfielders and a prolific Spurs forward… who are England’s young stars impressing in the U19 European Championships and can they break into their respective first-teams?

England’s Under-19s squad have advanced to the semi-finals of the European Championships after two brilliant displays in the group stage with one game to spare.

Ian Foster’s side are the only team yet to concede a goal in the tournament, after a convincing 4-0 victory over Serbia, followed a comfortable 2-0 win over Austria.

Chelsea star Mason Mount and Arsenal keeper Aaron Ramsdale were among the starters when England U19 won the same tournament back in 2017.

Sportsmail takes a look at the youngsters impressing in 2022 and whether they have a chance of breaking into their respective squads in the upcoming season. 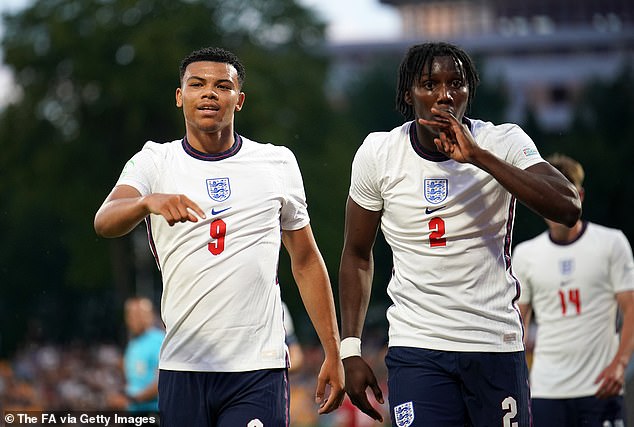 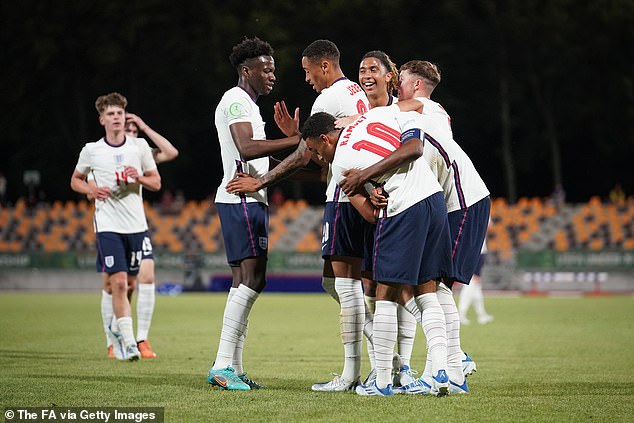 Young Lions started off with a comfortable 2-0 win over Austria, before thrashing Serbia 4-0

The Aston Villa midfielder has been England’s star performer of the tournament so far, with two brilliant displays in the victories against Austria and Serbia.

In their opening match against Austria, the 18-year-old was involved with everything positive for the Three Lions.

His dangerous play was rewarded at the end of the first-half as he scored England’s opening goal of the tournament.

He showed great composure as a pass was played to him from the by-line, not worried by the pressure from an Austrian defender immediately behind him and fired into the roof of the net.

The midfielder then showed some nifty footwork inside the penalty area before laying the ball off to Alfie Devine who tucked home magnificently. 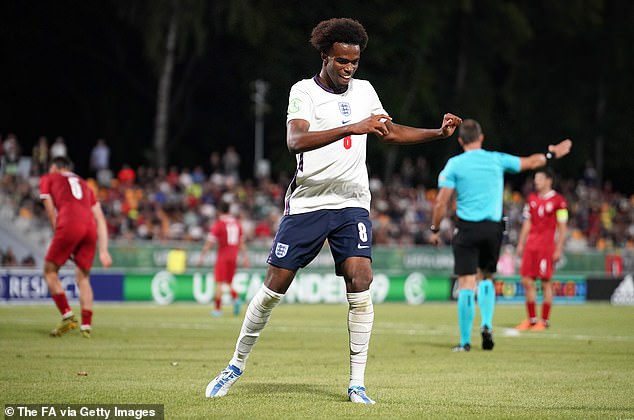 Against Serbia it was more of the same, as he set up Dane Scarlett for their opener, before passing the ball into the back of the net after a bursting run forward to score their third goal of the game.

The teenager has already got his taste of first-team football with 12 Premier League appearances last season – albeit just two of those were as a starter.

There is a worry among Villa supporters though that they could lose the player in the next year, with his contract set to expire in 2023 and clubs of the calibre of Barcelona and Borussia Dortmund linked with moves for the English youngster.

Speaking about Chukwuemenka’s future last season, manager Steven Gerrard said: ‘We believe this is the right place for him. If anyone else thinks it’s not then I would like to sit in front of them and discuss it.

‘We don’t see a problem. He’s got 18 months left on his deal. We need to let the kid play football.’

There’s not many figures in football for a young midfielder to learn from than the former Liverpool and England captain, and if he stays expect Chukwuemeka’s game-time to improve next season – if they are able to keep hold of the player. 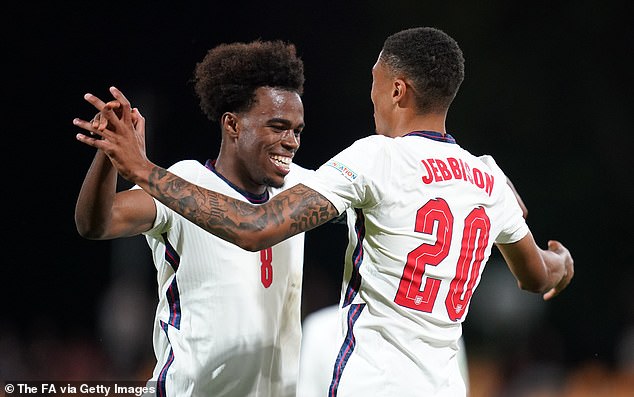 Borussia Dortmund have a habit of nurturing top young English talent, and they have another one on their hands in winger Jamie Bynoe-Gittens.

His story reads remarkably similar to Jadon Sancho, who like Bynoe-Gittens, joined the German giants from Manchester City.

And when you watch him play, it’s perhaps no surprise that he has been dubbed as the ‘new Sancho’.

The 17-year-old was a threat off the bench in the opener against Austria and should have been awarded a penalty.

A great pass from Chukwuemeka released Bynoe-Gittens to power into the box and though he looked to be clearly fouled, was shown a yellow card for simulation. 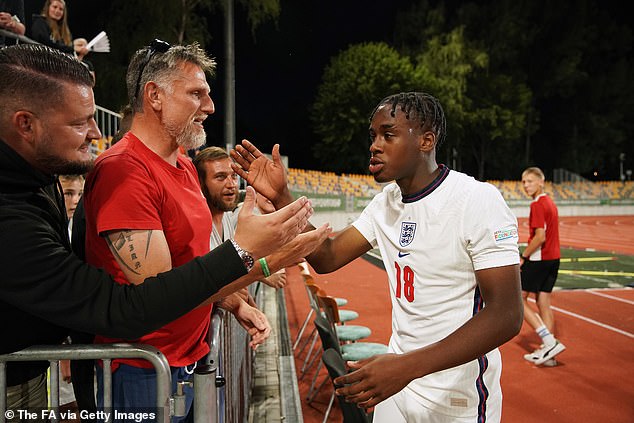 He started the next game against Serbia and it was his excellent marauding run that caused panic in the Serbian defence, leading to Dane Scarlett opening the scoring.

The youngster continued to make dangerous runs throughout the game, in a match in which England dominated.

Last season, he was called up to the first-team squad after some impressive displays – particularly in the UEFA Youth League where he scored six goals in four games, including two against Manchester United.

As a result he played in four of Borussia Dortmund’s last five games of the season, including a start against VfL Bochum.

Though perhaps not ready to be a regular starter for the Bundesliga giants, he is a name you can expect to see a lot more in their first-team squad in the upcoming campaign. 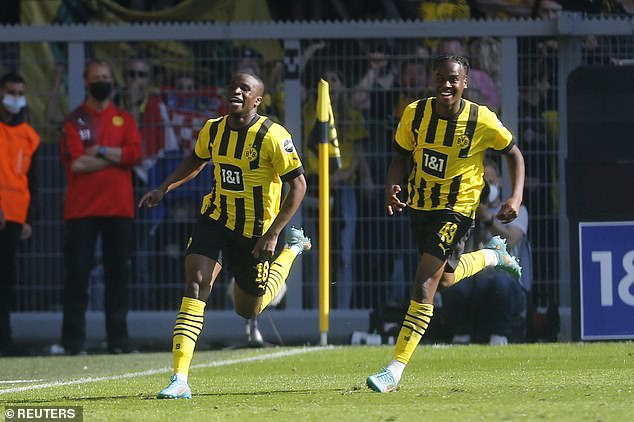 Just when you think there were enough right backs coming through the English system, Arsenal appear to have developed another promising youngster in the position.

The 18-year-old who spent last season on loan at Lincoln in League One, has started both of England’s games in the right wing back position and has been impressive.

He made some great chances for his team-mates and set up the second-goal as he did well to win the ball on the right flank, before his dangerous low cross was fumbled by the Serbian keeper – allowing Dane Scarlett to tap home.

Norton-Cuffy regularly charged up-field, drawing out defenders and opening spaces for his team-mates. 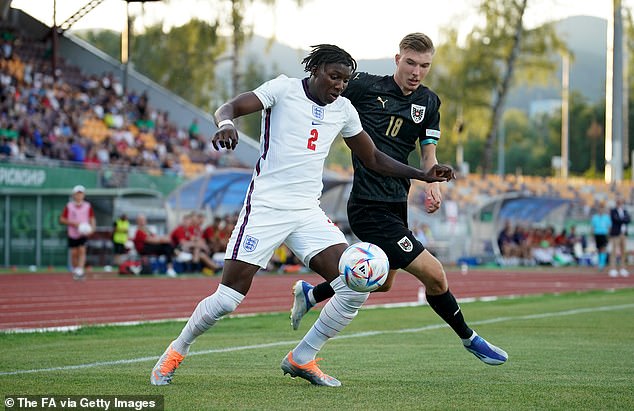 Mikel Arteta plays with a back-four, so the youngster would be expected to bring some defensive solidity if he was to break into the team, as dangerous as he would also be going forward.

The Gunners’ two main options at right back are Takehiro Tomiyasu and Cedric Soares.

Tomiyasu is expected to carry on as their number-one option next season, though Norton-Cuffy will hope that he can challenge Soares for minutes next season.

This will depend on Arteta believes the player is ready, and another loan spell wouldn’t be the most surprising outcome for the youngster.

Dane Scarlett produced a first-half brace to inspire England to a 4-0 victory over Serbia.

He opened the scoring after some excellent work from the already mentioned Jamie Bynoe-Gittens and Carney Chukwuemeka, before showing great instinctive finishing to capitalise on a goalkeeper mistake from Brooke Norton-Cuffy’s cross.

It was great forwards play for both goals, running away from his market for his first and an excellent near-post run to strike fear into the Serbian keeper on the second.

There was plenty else to admire about his performance, including his hold-up play to bring his team-mates into play and create threatening attacks. 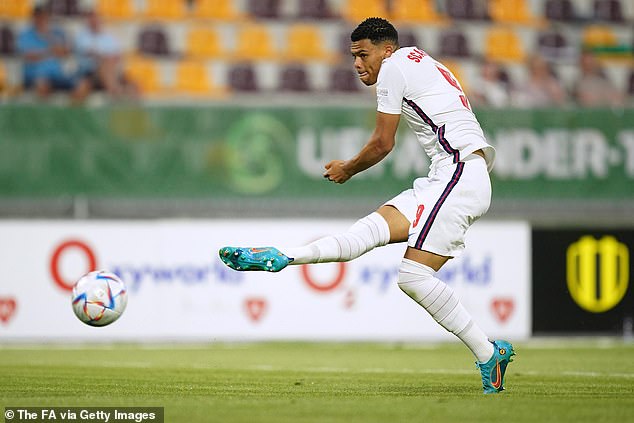 He also showed great intelligence in the opener against Austria as he got hold of the ball on the by-line and without looking cut it back, knowing a team-mate would be there to get on the end, and he got the assist as Chukwuemeka tucked home.

Scarlett is a player who is very highly thought of at Tottenham, and was handed his debut by Jose Mourinho in February 2021.

Though he only came on against West Brom in stoppage time, Mourinho said he wanted to be the one to bring him on because he knew Scarlett ‘will be somebody in a few years’.

The 18-year-old also made a short cameo against Leeds last season and Antonio Conte has described him as a very important prospect for Tottenham.

It will be tough for him to break into the first-team next season with the attacking talents Tottenham possess, including Harry Kane and Son Heung-min who are untouchable at this moment in time.

He has big steps to get to their level and a loan move might be the most beneficial outcome for Scarlett in order to get regular first-team football this season. 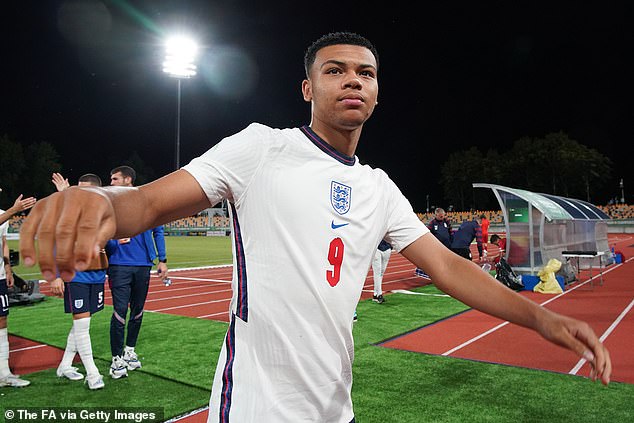 Aston Villa currently have one of the best academies in the Premier League, and they have an impressive array of midfield talent.

Jacob Ramsey has also broke into the senior team, while his younger brother Aaron, Carney Chukwuemeka and Tim Iroegbunam all played in the 2-0 win over Austria.

Iroegbunam, like Chukwuemeka, has started in both games and has produced two very solid performances in the heart of England’s midfield.

For the Three Lions, he has been the one to offer the defensive stability to allow others like his club team-mate Chukwuemeka to burst forward. 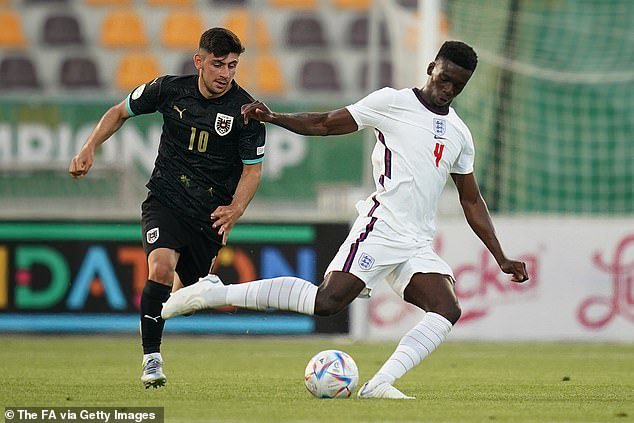 He is highly regarded at Villa Park, with manager Gerrard saying he’s ‘got all the attributes to be a top Premier League player’.

The 18-year-old made three Premier League starts last season, including a start in their 2-0 victory over Norwich in April.

The signing of Boubcacar Kamara from Marseille offers Iroegbunam a greater challenge to break into the first-team within the next season.

The Birmingham Mail have reported that he is attracting interest from across the Football League in regards to a potential loan move next season.

Villla though clearly have high hopes for the player, as shown by the midfielder signing a new contract in March that will keep him at the club until 2027.

England have kept clean sheets in both of their opening games, owed to some impressive defensive work from their three centre backs in both games.

He kept his place for the game against Serbia and was rarely troubled, showing himself as a cool and composed presence in England’s back-line.

At Liverpool, he captained the U18s to the FA Youth Cup final in 2021 and was a regularly featuring for the U23s over the past season. 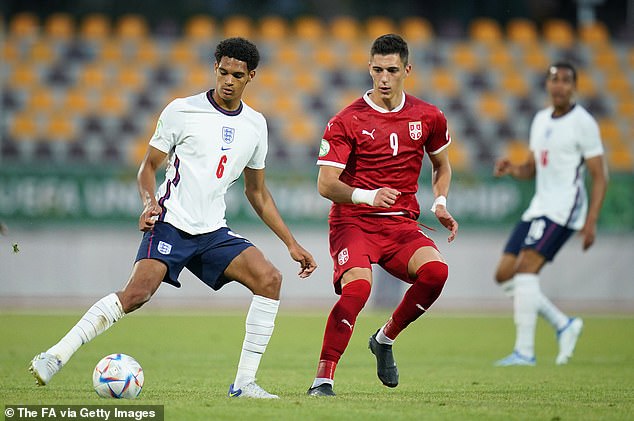 Quansah has shown in both games that he is comfortable on the ball and has good recovery pace.

He was twice an unused substitute for Jurgen Klopp’s side over the past season, but out of the team that started against Serbia he is the only one without a senior first-team appearance.

Quansah is unlikely to break into the first team next season given Liverpool’s formidable options including Virgil van Dijk, Joel Matip, Ibrahima Konate and Joe Gomez.

But if he is to stay at Liverpool over the next season rather than getting a loan, it would be no surprise to see him make his debut in a cup competition. 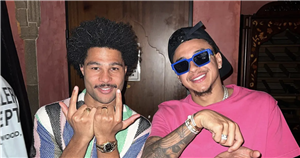