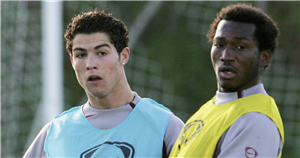 Cristiano Ronaldo enjoyed a close friendship with Eric Djemba-Djemba after joining Manchester United as a teenager back in 2003 from Sporting Lisbon.

The tricky winger moved to Old Trafford after catching the eye of Sir Alex Ferguson during the opening fixture at the Estadio Jose Alvalade just over 18 years ago.

Having paid a transfer fee of around £12million, Ronaldo then had the task of settling in a foreign country while trying to repay the faith of the iconic manager.

Despite that being an unenviable task, Ronaldo's time at the club was made more comfortable by his affinity with Djemba-Djemba, who had joined from Nantes the same summer.

Nicky Butt, speaking exclusively to Ladbrokes, said: "It was over those first couple of years at United we saw a real change in him, and then obviously he's since gone on and reached a new level.

"He arrived at the same time as Eric Djemba-Djemba and the pair of them palled up together.

"They were very good mates, so it wasn't like any of us felt like we had to take Ronaldo under our wings.

"There were so many good lads in that squad; we were all really close, so when we stepped out on the pitch, we all looked after each other."

Will Ronaldo fire Manchester United to Premier League glory this season? Give us your thoughts in the comments section

While Djemba-Djemba would go on to join Aston Villa in 2005 and play for nine more clubs before retiring in 2016, Ronaldo won three league titles with United and two each with Real Madrid and Juventus as well as five Ballon d'Ors.

The Cameroon international recently spoke about his relationship with Ronaldo, and what he is like in person as opposed to the superstar seen on TV.

He told AmericanGambler: “People can watch Ronaldo on the television, but they don’t know the real Cristiano. Cristiano is a man who had a difficult time as a kid in football.

“People see him on the television and think he is arrogant or takes the p*** out of people, but Cristiano is an emotional man. You need to talk to him to see who he really is.

“My mum passed away and he said, 'Eric if you need me, you can call me, you can visit me, don’t worry I am here for you'."

Adding: “When we went to away games, we were room-mates. He was my best friend.

"We were together every single day for training; sometimes I would go to his house to eat as his house as his mother was there with him when Cristiano was young. Sometimes he would come to my house to eat, as I was living alone in Rio Ferdinand’s old house!”

Tottenham board private jet from Stansted as they head to Manchester