Manchester United boss Erik ten Hag sees Harry Maguire and Raphael Varane as his first-choice defensive pairing, reports say. The duo both had inconsistent seasons last time out. But their new boss believes they can both get better as he looks to bring the glory days back to Old Trafford.

Manchester United signed Maguire from Leicester back in the summer transfer window of 2019, with the England international moving from Leicester.

And, last year, they thought the 29-year-old would take his game to a new level when Varane touched down from Real Madrid.

Ultimately, however, both players disappointed as United endured a terrible season under Ole Gunnar Solskjaer and Ralf Rangnick – with the club shipping 57 goals as they finished sixth in the Premier League table.

But while Maguire and Varane toiled, the Guardian say Ten Hag has earmarked the pair as his ‘first-choice’ centre-back pairing.

That suggests that while the club are open to landing a new defender, they’ll only be brought in to provide competition for the duo.

Ten Hag is also said to be happy to have Victor Lindelof as part of his squad, too.

The Sweden international has often blown hot and cold ever since his arrival from Benfica back in the summer transfer window of 2017, when Jose Mourinho was manager.

But, despite that, Lindelof is primed to stay at United and play a part in Ten Hag’s rebuild.

However, the publication does say that United will allow three of their defenders to leave the club this summer.

The Red Devils expected big things from Eric Bailly when he touched down from Villarreal in 2016.

Yet the Ivory Coast international has often struggled with injuries and made just four Premier League appearances last term.

Linked to AC Milan and Napoli, all signs point to Bailly being shown the door by United this summer.

Axel Tuanzebe toiled during his time at Napoli last term, especially after failing to impress at Aston Villa.

And United are also open to parting ways with the centre-back, who was previously tipped for a bright future under Solskjaer.

Another player the Red Devils are willing to cut loose is Phil Jones, who has been at the club ever since 2011.

Like Bailly, however, injuries have often prevented the England international from fulfilling his potential at Old Trafford.

And that means Jones is heading for the exit door, providing potential suitors can be found.

Meanwhile, regarding Maguire, the United star has faced scrutiny galore over the last 12 months.

His form hasn’t just waned at club level, with the former Leicester star recently struggling for England as well.

But Martin Keown has urged Ten Hag to trust Maguire, saying: “This isn’t the first time I’ve come to Maguire’s defence. I did it during the season, too.

“Fans and pundits can provide constructive criticism but at times, it’s felt like comments made about Maguire have fallen more into the abuse category and that’s wrong.

“This is a good player who has taken on the pressure of captaining Manchester United and a central defender who has earned the trust of Gareth Southgate because he has been dependable.

“He has been through a difficult period in terms of form. The way Ralf Rangnick wanted him to play, in a pressing system with a high defensive line, was different for Maguire and he looked a little uncomfortable with it.

“You hope Erik ten Hag will use him properly, noticing the statistics state United concede less than a goal a game and have lost just twice when Maguire and Raphael Varane start together.” 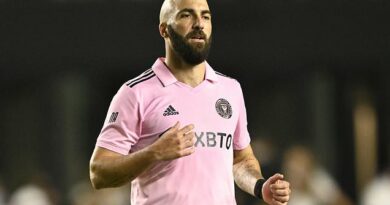 'He HAS to perform': Phil Neville challenges Gonzalo Higuain