Home » Soccer » Eriksen admits Spurs only have themselves to blame

‘We should have finished the game off’: Christian Eriksen admits Tottenham only have themselves to blame after late PSV equaliser leaves Champions League dream in tatters

Christian Eriksen admitted Tottenham only had themselves to blame following their latest Champions League setback.

Spurs’ chances of qualifying from Group B lie in tatters after they conceded a late equaliser in a 2-2 draw at PSV Eindhoven.

The visitors were leading after goals from Lucas Moura and Harry Kane cancelled out Hirving Lozano’s opener for PSV. 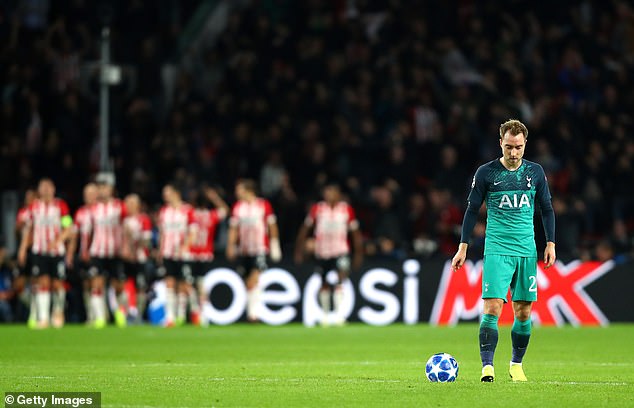 But with 11 minutes left goalkeeper Hugo Lloris was sent off after racing out of his penalty area and upending Lozano.

Disaster struck in the 87th minute when former Newcastle loanee Luuk de Jong stabbed home an equaliser to leave Spurs with just a point from their three matches, five points behind Inter Milan in second place and eight behind Barcelona.

Eriksen had an eventful match upon his return from injury, providing the cross from which Kane headed Spurs ahead but then misplacing the pass that sent Lozano through on goal and ended with Lloris’ red card.

‘We should have finished the game off,’ the Denmark midfielder told Spurs TV. ‘We didn’t do that and PSV had the chance to come back.

‘I gave a bad pass, Hugo had a sending-off – I don’t think he was the last man – but, again, if we finish the game off we don’t have that at the end.

‘We could have done better.’ 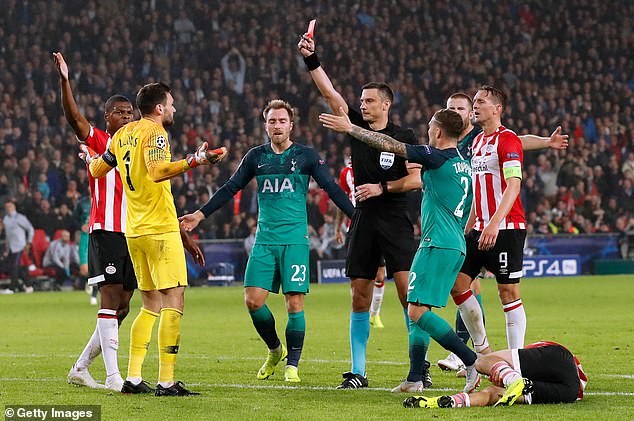 Spurs will now probably have to win all three of their remaining games, including a trip to Barcelona, and hope Inter Milan slip up against PSV, to have any chance of catching the Italians.

‘Maybe we can qualify, but in the end it will be difficult when the opponent will be tougher than the one we played here,’ said manager Mauricio Pochettino.

‘We need to win the three games and some results that help us to achieve a place for qualification, but it will be so, so difficult.’

Arsenal and Tottenham 'to battle it out for Chelsea winger Willian'