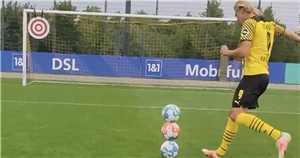 Erling Haaland has left fans in amazement by performing a sensational trick shot in Borussia Dortmund training this week.

Haaland, 21, is arguably the most sought-after young player in world football right now after scoring an incredible 68 goals in 67 appearances for Dortmund.

The Norwegian striker has been attracting interest from some of Europe's juggernaut clubs as a result of that breathtaking goalscoring form, including Manchester City, Manchester United, Chelsea and Real Madrid.

He is already proving to be a generational talent, and the trick shot he pulled off in Dortmund training this week only supports such a billing.

In a clip uploaded on social media by the Bundesliga, Haaland first stacks three balls on top of each other on the penalty spot.

He then fires the top ball straight at a practice target hanging in the top-left corner, before smashing it to pieces with the second one.

Do you think Erling Haaland's trick shot is real? Let us know in the comments section below.

And despite only a small part of the shattered target remaining, the Dortmund sensation still manages to hit it with the third and final ball.

It was a sublime piece of skill from Haaland, so much so that fans were left to question whether the footage is actually real on social media.

Another said: "Bruh he is unreal."

A third commented: "How did you put 3 balls on top of each other? that’s more interesting".

A fourth wrote: "Damn this can't be real".

While one simply said: "There is no way you could balance three balls on top of each other like that. Erling, of course, did it anyway. Because Erling doesn’t care what humans think is impossible."

Dortmund then reassured fans that the footage is in fact genuine by posting it on Twitter themselves and writing the caption: "This is real, trust us".