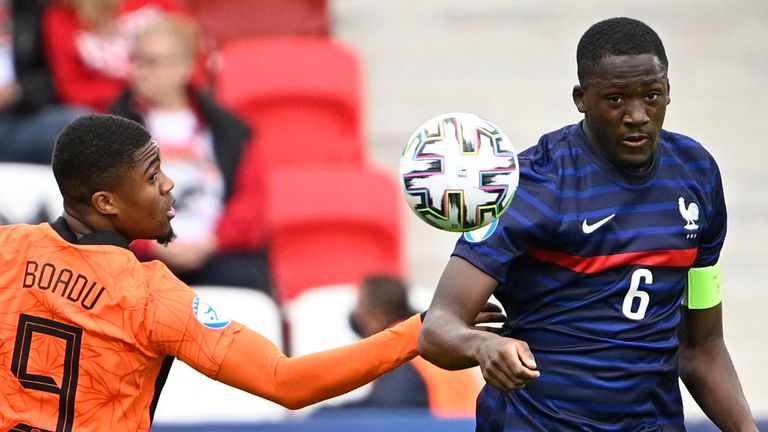 Centre-back Konate – who will join Jurgen Klopp’s ranks this summer – captained his country for their quarter-final clash on Monday evening in Budapest but the Netherlands’ Myron Boadu completed a fine double with the winning goal on 93 minutes to upset the odds.

The tie had looked set to go to extra-time when Boadu was just onside to cancel out Dayot Upamecano’s first-half header for the highly-rated French side, who had seen Perr Schuurs block Jonathan Ikone’s shot before the French winger struck a post.

But Boadu clinched it in the final seconds of normal time to set up a semi-final clash with Germany, who edged a dramatic penalty shootout with Denmark 6-5, after drawing 2-2.

Paul Jaeckel scored the winning penalty for Germany after his goalkeeper Finn Dahmen pulled off saves from Victor Kristiansen and 17-year-old Wahid Faghir, to spare the blushes of team-mate Jonathan Burkardt.

Faghir had put Denmark on the brink of the semi-finals with his goal in normal time but with just two minutes to play in Szekesfehervar, Manchester City youngster Lukas Nmecha equalised for Germany.

They then went ahead through Burkardt in extra-time before Victor Nelsson scored from the spot after Lars Lukas Mai brought down Gustav Isaksen to send the game to a shootout.

Spain, meanwhile, survived a scare against Croatia to come through their quarter-final in Maribor, with Javi Puado scoring the winner – and his second of the game – in extra-time.

Spain were on course to progress during normal time, with Puado’s opener giving them a slender advantage. But Hugo Guillamon clipped Stipe Biuk as he was about to shoot in the box and Luka Ivanusec drilled in a superb equalising penalty on 94 minutes to send the game to another 30 minutes.

Puado wasn’t done, though, and after breaking through on 110 minutes, he kept his cool and eventually worked some space to fire Spain into the final four.

They will play Portugal on Thursday, who eventually edged a 5-3 thriller with a defiant Italian side after extra-time in Ljubljana.

Dany Mota put Portugal two up from two first-half corners, with the first of his two goals coming from a spectacular overhead kick.

Italy pulled one back on the stroke of half-time from a corner of their own, with Tommaso Pobega converting from close range but Goncalo Ramos gave Portugal a comfortable cushion once more when he slipped in a third on 58 minutes.

Italy wouldn’t lay down, though, and Gianluca Scamacca struck two minutes later before Patrick Cutrone scored an 88th-minute equaliser to send the game to extra-time.

However, Matteo Lovato was shown a second yellow card just before the final whistle and, down to 10 men, Italy finally succumbed during that added half an hour. Jota of Benfica scored Portugal’s fourth and, after Cutrone had missed a golden chance to equalise once more, Francisco Conceicao put the tie beyond doubt in the final moments.

Liverpool stars get back to business after Champions League heroics