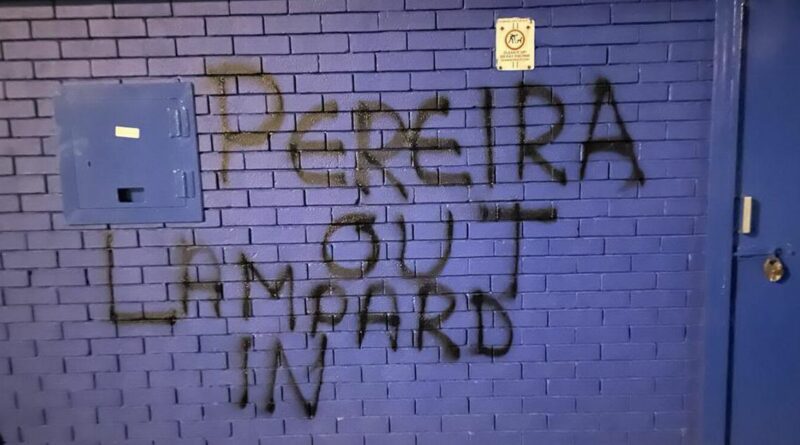 Some Everton fans have displayed their dissatisfaction with the rumours that Vitor Pereira will be appointed new manager of the club by spraying graffiti at Goodison Park asking for him to leave.

Indeed, even though the Portuguese coach has not even been formally appointed, some Toffees fans have etched on a wall: “Pereira out – [Frank] Lampard in.”

Both managers have been linked to the position at Everton, along with former Everton player Wayne Rooney, but Pereira has emerged as Farhad Moshiri’s favoured choice, according to the Guardian.

Rafa Benitez was sacked earlier this month as results led to the Merseyside club into a relegation scrap.

Certainly, a loss to Newcastle, currently 18th, on February 8 will draw them further into danger. Everton have not been relegated in 71 years.

Pereira, formerly coach of Porto, was most recently Fenerbahce manager. The 53-year-old was sacked by the Super Lig club last month, despite only being in the dugout for five months.

Who do you think Everton should sign? Tell us in the comments section.

Moshiri, along with business associate Alisher Usmanov, has held talks this week with the 53-year-old – but some among the Everton hierarchy do not believe he’s the right choice for the job owing to his poor tenure at 1860 Munich, in which he led them to relegation from the Bundesliga. There are also concerns that he has no Premier League experience.

Lampard, who’s had mixed tenures at Derby County and Chelsea, has also been in talks about the vacancy.

Either way, any fresh appointment will mark Moshiri’s sixth in as many years.

A decline in results and a lack of progression has caused fans to start to protest. On Tuesday, outside of Liverpool’s iconic Liver Building, banners were raised calling the board a “board of failure.”

As part of the #27yearscampaign – the time in which Everton have been trophyless – a sit-in protest after Saturday’s defeat by Aston Villa.

Everton sit 16th in the Premier League table and are four points off the bottom three.