Everton fans will sensationally walk out of Saturday’s Premier League clash with Arsenal for five minutes to protest against Farhad Moshiri’s perceived lack of communication, according to reports. The Toffees were thrashed 4-1 by Merseyside rivals Liverpool on Wednesday and supporters are unhappy at the direction of the club under former Reds boss Rafa Benitez.

Benitez, who won the Champions League with Liverpool in 2005 and is considered a heroic figure at Anfield, was a controversial appointment at Goodison Park in the summer.

Sections of the Everton support voiced concern over such a character being in charge of the club.

However, a positive start to the season eased those concerns: Everton earned 10 points in their opening four games.

Benitez’s side have won just five more in their next 10 fixtures, though, and have not been helped by injuries suffered by key players.

England striker Dominic Calvert-Lewin and midfielder Abdoulaye Doucoure have missed large parts of the campaign for the Merseysiders, who are 14th in the top-flight.

Several reports this week claimed that the Everton board were holding crunch talks in the wake of Wednesday’s crushing defeat to rivals Liverpool but Benitez has kept his job.

Among Everton’s recent poor results have been a 3-0 loss at Aston Villa, a 5-2 defeat by Watford, another 3-0 reverse against Manchester City, and the 4-1 thumping by Liverpool. They were knocked out of the EFL Cup by Championship Queens Park Rangers.

Now, supporters are being urged by several high-profile fan groups to leave their seats for five minutes on 27 minutes when their side host Arsenal on Monday.

According to The Athletic, fans are unhappy with the perceived lack of communication by majority shareholder Moshiri during difficult periods of form.

“27 years without a trophy is unacceptable. Show your feet on 27 minutes during the game against Arsenal on Monday evening and walk out of Goodison Park.

“Let’s show that the incompetence from the top at Everton Football Club cannot continue.”

“We were running more than Liverpool in every department, but we conceded four goals. They punished our mistakes.

“Now is a time we have to stick together, go into January in the best position we can.

“You can complain about our mistakes, quality, things like that – but not commitment. We have to work really hard.

“Every win is a must-win game. Why am I still positive? Because we did it at the beginning.

“You can’t be a bad or good manager in one week. If the team was really good, signed two wingers, made crosses – we cannot be wrong in everything after six weeks.”
Source: Read Full Article 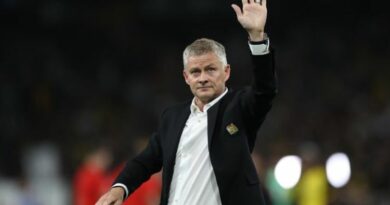