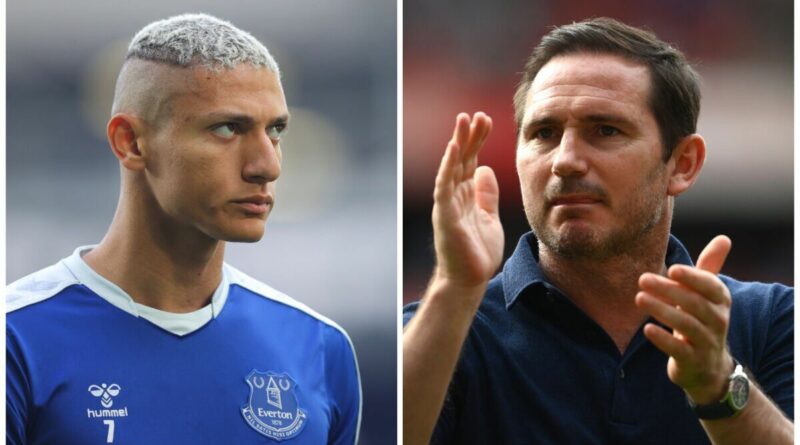 Everton star Richarlison has revealed that he has had talks with manager Frank Lampard about his future at the club. The Brazilian has been linked with an exit from Goodison Park this summer as he has been tipped to make a move to either Paris Saint-Germain or Manchester United.

Richarlison was one of the key players behind the Toffees’ late-season resurgence and was involved in goals during their crucial wins against Crystal Palace, Leicester City and Chelsea. He scored ten goals in 30 Premier League appearances last season and picked up five assists.

After joining up with Brazil, Richarlison spoke to local media Globo Esporte and said: “I’ve already made it clear to the board, I’ve already talked to Lampard too, with my agents and they know what I want. Let’s wait for June.

Richarlison has been linked with a host of Premier League clubs including Arsenal, who have reportedly sounded out the Everton forward ahead of a possible summer move. The 25-year-old has had a mixed spell at Everton since his move from Watford in 2018. Richarlison has recently endured himself to Blues fans not just on the pitch but also with his antics on social media.

He poked fun of Merseyside rivals Liverpool following their Champions League final defeat to Real Madrid when he posted a mock-up of him behind the wheel of a bus to his Twitter account in the immediate aftermath of the match. The image was in reference to a pre-match rumour on social media claiming that a group of Everton fans had created a fake travel company to trick Liverpool fans into booking a coach that never showed up to take them to Paris earlier this week.

It was not the first time Richarlison has trolled Liverpool, after they suffered final day heartbreak when Manchester City completed a late comeback over Aston Villa to seal the Premier League title ahead of Liverpool, the Brazil forward posted a GIF online shortly after of Thierry Henry laughing.

After Everton’s win over Crystal Palace that saw them confirm their Premier League safety, Richarlison tweeted at Liverpool legend Jamie Carragher to say that he doesn’t respect the Sky Sports pundit: “Wash your mouth before you talk about me and Everton and I don’t respect you.”

Carragher enjoyed the remark by Richarlison though and took it in good faith, tweeting: “I actually quite like this, if Twitter was about when I was a player I’m sure I would’ve called pundits out quite a lot!!”

‘You can do anything’: Bayern Munich’s Alphonso Davies on his rise from refugee to Champions League winner