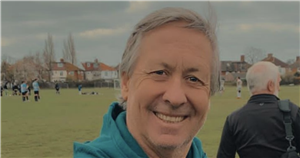 Ex-Arsenal, Crystal Palace and England defender Kenny Sansom has shared a postive update with his Twitter followers after being diagnosed with a brain disorder and form of dementia last year.

The 62-year-old was taken to hospital while fighting for his life in early 2020 after suffering serious head injuries during a brutal attack.

He has since been treated for Wernicke-Korsakoff syndrome, which is reversible, and has now offered an emotional update while sharing photos of himself in Arsenal and Palace training kit.

The tweet has been met with an outpouring of support for Sansom, who made 86 appearances for his country while lifting the FA Youth Cup with Palace and League Cup with the Gunners. “I know I'm improving, so that's good news. I'm going for walks every day. My memory is getting better too. Thanks to Arsenal and Palace for the new clothes.”

“The ball gets passed around the defence, then it comes back to the keeper. They give it away now and nobody says anything. “If you welly it and it goes straight to their centre-half, it's crazy. If you're going to make it in the first team, you have to learn. Like with throw-ons. A throw-on is a pass. It's a pass to a teammate. The amount of people who give it away is incredible.

“England passed it around the back so much the other night, it was boring. They keep the ball lovely, fantastic if you get points for that. Players look for little fouls now.

“It's easy to get booked now. I'm looking at the game from my day. We had players that could tackle.”

Crystal Palace had said in a statement in December: “Kenny is out of hospital and settled in new accommodation. But he has been diagnosed with Wernicke-Korsakoff syndrome, a type of brain disorder and form of dementia.

“He is in the early stages of the illness, which is reversible and treatable. With the support of his family and carers, he is on the first steps of his road to recovery.

“Those closest to him are encouraged by his progress and the positive attitude he is showing in difficult circumstances. The family would like his and their privacy to be respected.

“As always, everyone at Crystal Palace Football Club wishes Kenny well, and we look forward to welcoming him back to Selhurst Park again soon.”