Former Liverpool defender Andre Wisdom has been stabbed and robbed as he visited a relative.

The 27-year-old, who now plays for Championship side Derby, was attacked in Toxteth in Liverpool.

Wisdom is recovering in hospital after the attack, which happened hours after he played in their 2-1 win over Reading on Saturday.

A Derby County statement said: ""Derby County Football Club can confirm that Andre Wisdom has been the victim of an unprovoked assault and robbery.

"He sustained injuries which resulted in him being admitted to hospital, where he is in a stable condition.

"Merseyside Police are investigating and the club will focus its efforts on supporting Andre and his family.

"Therefore we will not be making any further comment at this time." According to The Sun, Wisdom was getting out of his car when he was attacked.

A source told the newspaper: "It’s awful news. He must have been on a high after his team played so well.

"To then have something like this happen is just tragic. It was totally unprovoked.

"It’s impossible to imagine what his family must be going through. "All his fans wish him a speedy recovery and hopefully he’ll be back on the pitch again soon."

Wisdom signed for Liverpool as a 14-year-old and made 14 appearances for the club before loan spells at Derby, West Brom, Norwich and Red Bull Salzburg.

He joined Derby on a permanent deal in 2017 with the Rams lying eighth in the second tier, three points outside the Play-Off spots. 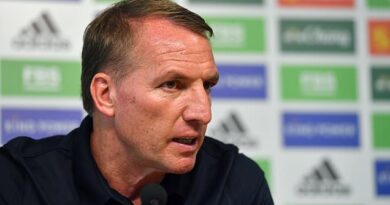 Brendan Rodgers insists Maddison and Fofana will be staying